As audio and video technology becomes more mobile, the size of high-quality digital audio components get ever more smaller and compact. A good example of this trend is the Tascam DR-10L, a $199.99 combo digital audio recorder and lavalier mic that’s so small it almost disappears.

Tascam, with its series of DR-10 featherweight recorders, has joined other vendors with similar audio recorders such as the Lectrosonics PDR ($749), juicedLink Little Darling ($149) and Zaxcom ZFR300 ($1,050). Each of these recorders are substitutes for wireless microphones, but they vary widely in features and cost. 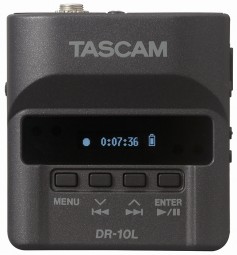 High-end units like the Lectrosonics PDR (Portable Digital Recorder) are feature rich and include time code sync from an external source, a servo bias input preamp and very high-end specs. The PDR weighs 2.5 ounces. Zaxcom’s ZFR300 can also jam time code via the ZaxNet 2.4Ghz signal, handle two mics in stereo and join any number of recorders for multi-track recording. Audio can be wirelessly monitored. It weighs 3.1 ounces.

On the low-cost end of the scale are several Tascam models, built around the same recorder. Tascam’s DR-10L weighs less than two ounces and comes with a lavalier mic connected by a 3.5mm mini TRS jack with Sennheiser-compatible screw-down lock. The DR-10X ($115) uses the same recorder, but has a standard XLR connector for pro hand microphones. The recorders are also connected to shotgun mics for on-camera operation.

When I received a Tascam DR-10L, the first thing I noticed was its tiny size. This recorder is practically weightless, far smaller than most wireless body packs. My first fear was it would be too hard to operate the controls and to see the tiny menu.

Well, what a surprise! Tascam did its homework. The menu, operating on a single line with clear terminology on an easy-to-read organic EL display, is much better and more understandable than many of Tascam’s larger recorders. What a pleasure not to have to dive into dozens of complex menu options. 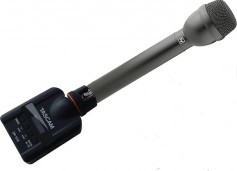 In fact, when you know all your settings, you can make a text file and put it the microSD or microSDNC card. When the recorder is turned on, the file activates all your preferences. A nice touch, I thought.

This recorder generates up to 48kHz/24-bit WAVE files and works with any single AAA cell, including alkaline, NiMH or lithium. An alkaline AAA battery powers the DR-10L for up to 10 hours continuously. The device can also use disposable lithium or rechargeable NiMH batteries. For extra recording time, a lithium cell can power it for more than 15 hours.

The DR-10L can handle memory cards up to 32 GB. If the battery runs out in the middle of a recording, the unit will automatically save the file before turning off so the take isn't lost. 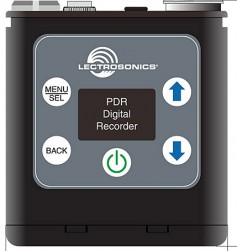 A built-in clock function supports BWF files with included time information, which is convenient for editing and searching. An incremental time track function allows the creation of new files at regular intervals (about every 15 minutes) during recording.

Tascam has included a dual recording mode, which allows two separate files to be recorded simultaneously at different levels. If the main audio track becomes over-modulated due to some accident, the second channel is recorded 6 dB lower in level.

Audio levels can be set to automatic, or manual to a series of preset positions. The best place to set the recorder with the included mic is the middle level, I found. Better lavalier microphones can be used with the recorder, as long as they have the Sennheiser wireless connector. 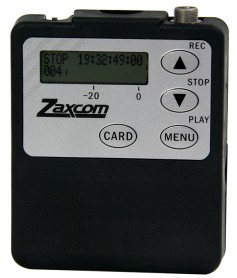 There is also a digital limiter, which is designed to prevent distortion when signals that are too loud are input suddenly. A low-cut filter can be enabled to a cutoff frequency below 120 Hz. This feature set prevents recording disasters in most cases.

To check a recording, there’s a playback function that can play audio through the headset jack. The headset output is adjustable and I found it had plenty of gain for such a compact device.

To get sound off the recorder and into a computer, the user fortunately does not have to remove the fragile memory card. The recorder has a micro USB B port and cable that allows plug-and-play hookup to any Mac or PC. Data exchange is simple and can be stored in a file on the computer.

For a device that weighs only 63 grams, including battery, the Tascam DR-10L is a little miracle with a truckload of capabilities. Once I got the hang of using it, the functions became easy.

My only difficulty was with the sliding switch used to place the recorder in the record mode. It requires a good finger nail to access, since the space is so limited. For older users, it also might be useful to wear a good pair of glasses the first time while setting up the menus. Once, set up, they are easy to check out with any eyes. 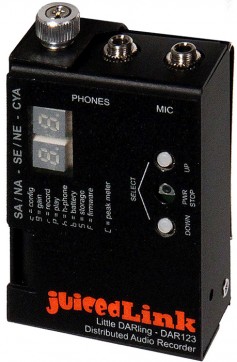 The DR-10L was no doubt designed as a low-cost wireless mic substitute. And for that purpose it’s a useful tool. One or more units can be synced to video via the built-in sync function in many video editors or using Red Giant’s PluralEyes 4 software.

However, it can also be used to supplement a normal wireless mic as well, especially when interference strikes and there is no time to find the reason. Any way you look at it, the DR-10L and its variations could be very useful in many situations. It is a tool that could earn its keep in any audio professional’s sound kit. We may be just beginning to find its uses.