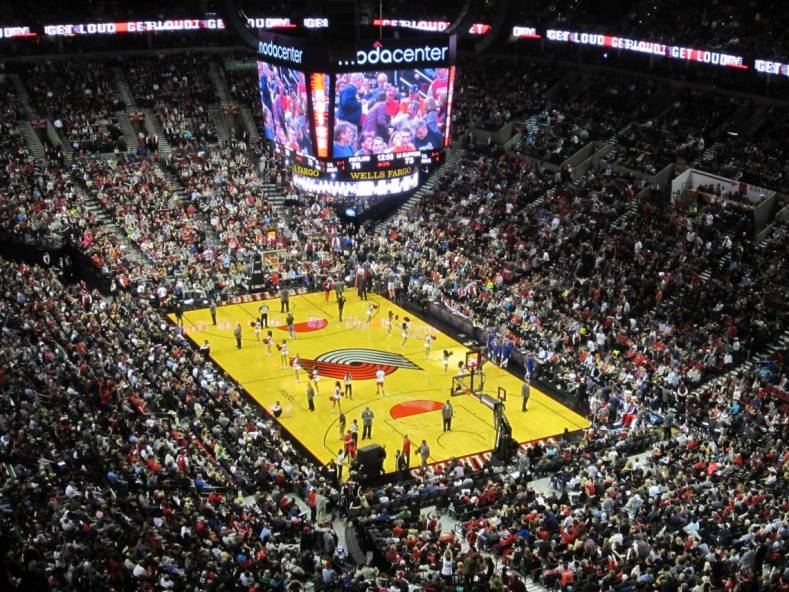 The Portland Trail Blazers has expanded its live production capacity to 30 channels with EVS technology.

The Portland Trail Blazers — already one of the most progressive NBA basketball franchises in effectively using video — has expanded its live production capacity to 30 channels.

“When we built the control room for Trail Blazers Broadcasting six years ago, a single XT server was enough for our needs,” said Mike Janes, director of engineering at the Trail Blazers and their 20,000-seat home arena — the Moda Center in Portland, Oregon. “Now we’re able to provide complete pre- and post-show content to our broadcast partners as well as for big screens and monitors inside the arena.” 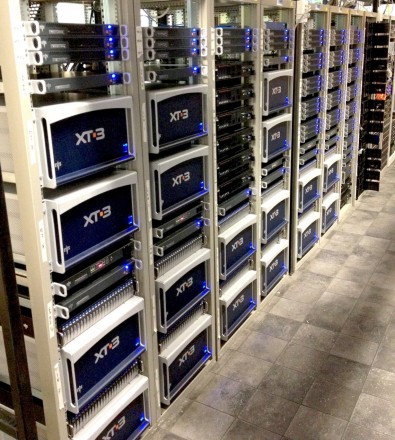 Both the Portland Trail Blazers and the Moda Center arena are owned by Paul Allen, co-founder of Microsoft Corp. with Bill Gates. Allen also owns the Seattle Seahawks of the National Football League and is part-owner of the Seattle Sounders FC, which joined Major League Soccer in 2009.

Allen and others built the arena in 1993. It has state-of-the-art video and sound facilities. At center court is a Mitsubishi-manufactured high-definition video scoreboard. It hangs from the ceiling and features four 15-feet by 22.5-feet video displays, among the largest in the NBA.

The arena also features over 650 television monitors placed throughout, showing the action on court. Auxiliary scoreboards located both in the arena itself and the concourses provide statistical information, including “hustle” statistics for basketball (rebounds, blocked shots and steals). Three media towers — one at each main entrance — provide video of other games in the NBA.

A unique feature found in the Moda Center —and no other multi-purpose arena — is the "acoustical cloud." The acoustical cloud is a set of 160 rotating acoustic panels suspended from the arena’s ceiling. It was intended to recreate the roar of noise that made the old Memorial Coliseum one of the loudest buildings in the NBA.

One side of each 10-foot by 10-foot panel reflects sound, while the other side absorbs sound. Each panel is shaped like an airplane wing, and is eight inches thick at the center and four inches thick at the edges. The effect during Trail Blazers’ games is to absorb the noise from the upper levels and reflect it back down to the court.

The acoustical cloud cost $2 million to design and install. The arena is also equipped with a JBL sound system. The acoustics of Moda Center have been widely praised compared to similar venues. The expansion of video facilities is typical for the cutting edge facility. 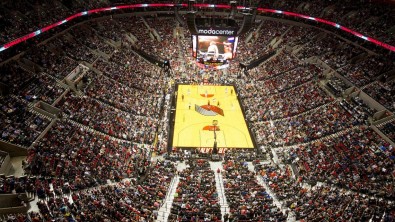 At center court is a Mitsubishi-manufactured high-definition video scoreboard.

“The XT3 video server allows the team to record all the isolated shots from cameras during live events, produce very rapid turnaround replays and build highlights in the live production,” said James Stellpflug, v.p. of sports products at EVS.

“Then they can move the best of that content to longer term storage, which is the XStoreNAS. That allows them to keep months of content online so they can access it, consume it from an editorial perspective and distribute it to a wide range of other devices.”

In addition, Stellpflug said, the Trail Blazers use the EVS products to manage their content, add metadata and deliver transcoded versions of the content to alternative outlets like the Web and mobile devices. “They use their core platform for all the content originating to and from the live footage in stadium games,” he said.

The XStoreNAS functions as nearline storage, allowing craft editors to put HD and SD clips into shared storage and make them immediately available in any format. It allows users to encode once and then repurpose multiple times to create a file-based workflow. 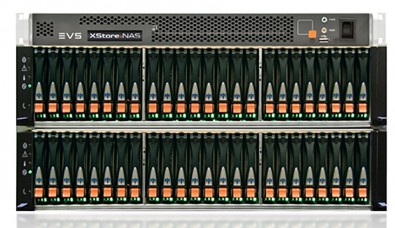 The EVS XStoreNAS functions as nearline storage, allowing craft editors to put HD and SD clips into shared storage and make them immediately available in any format.

The Portland team’s additions have put it in a leadership role in creatively using video media within the National Basketball Association, said Stellpflug.

“This is a typical installation, but it is multiplied at a scale that is very significant. They are functioning as a state-of-the-art media organization,” he said. “Most other NAB teams have equipment to do replays in production, but the usage that the Trailblazers are engaged in is an exception in the industry. They take better advantage of their video content and do much more with it.”

NBA teams are definitely more into content strategy as to how they try to leverage their video assets to reach more fans, Stellpflug said. “But today, a lot of the teams don’t have a good plan. The Portland Trail Blazers are a fantastic example of using their investments to really center themselves around content for their fan base.”