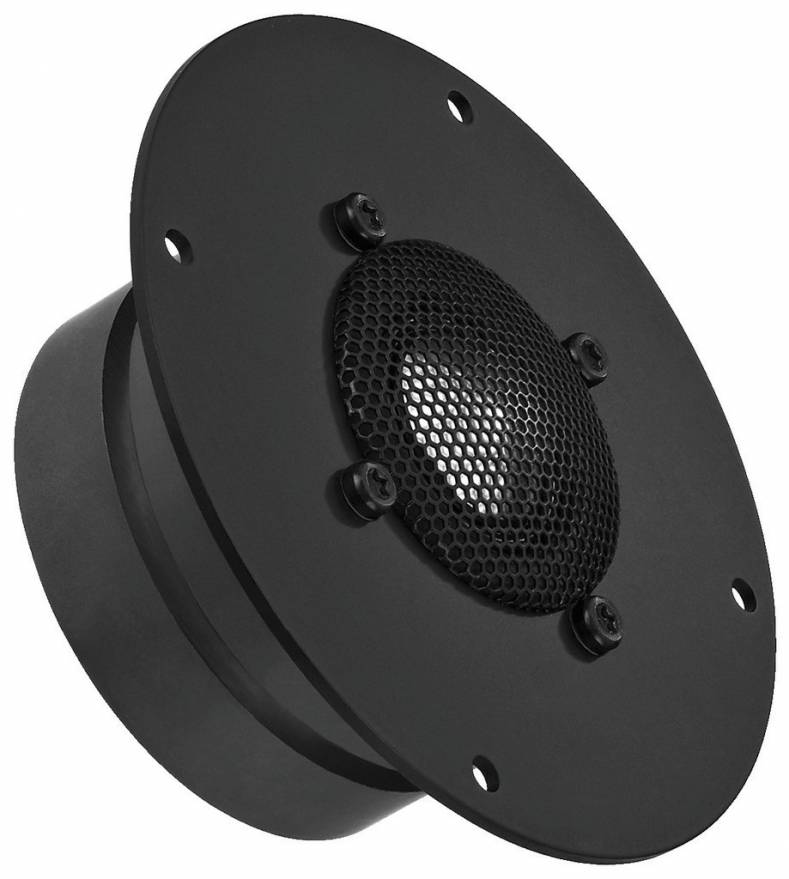 The dome tweeter is common in Hi-Fi speakers because it looks as though it ought to work. Here John Watkinson explains that appearances can be deceptive.

One of the realisations that have occurred to me over the years is that in order to be a loudspeaker designer, or possibly any kind of designer, one needs to have some understanding of psychology. Foolishly I thought I would benefit from merely understanding the laws of physics, especially with relation to acoustics, but once I had understood, I was propelled immediately in a conflict between what those laws predict and what a lot of people do on an everyday basis.

An early understanding of psychology would have enabled me to explain the conflict sooner, but better late than never. At least I now know why people carry on doing things in the same old way despite irrefutable evidence that they don’t work. As the sound quality achieved has been static for several decades, perhaps now the only interesting aspect of Hi-Fi is the psychology.

The psychological aspects of design are also very powerful, and conspire to ensure that the majority of so-called designs are in fact merely copies of what has gone before due to lack of confidence. Tradition is only another word for fear of change. The true designer makes a step forward by understanding the principles and finding new solutions, whereas adhering to tradition requires no understanding at all, which explains why many traditions continue when the reasons they came in to being no longer exist.

Which brings me to the dome tweeter: after all I have said about directivity, surely a spherical radiator would have beneficial properties? Fig.1a) shows a sphere which somehow or other manages to change its radius in sympathy with the sound waveform. That would be marvelous, because the frequency response would be the same in all directions.

Unfortunately, a dome tweeter isn’t like that. Fig.1b) shows that in a dome tweeter, the diaphragm moves axially and the results are then completely different. The problem is that to the casual observer, the dome of Figure1a looks the same as the dome of Figure 1b. It looks as though it ought to work and it’s easy and cheap to make. And when enough people prefer the evidence of their eyes to that of their ears, then it is deemed to work. This is one of the ways in which myths are perpetuated. 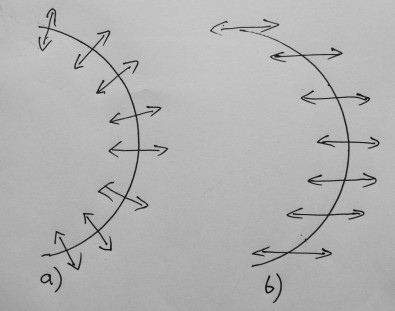 Figure 1. In Figure 1a an ideal sound radiator would be a part of a sphere that expanded and contracted. In Figure 1b shows a dome tweeter, which looks just like Figure 1a but it doesn’t work that way, because the movement is along one axis only.

The problem with the myth of the dome tweeter is that its behaviour can be predicted mathematically and testing confirms that the predictions are spot on. The information has been available for decades, but the fear of change and the lack of genuine design skills ensure it is ignored. This is one of the reasons that loudspeakers sound like loudspeakers and not like the original sound. It is one of the ways that legacy manufacturers render themselves powerless against disruptive technology.

Let us suppose at first, for simplicity that the dome is moves pistonically without flexing. To a fixed point on axis, the distance from various points on the diaphragm will vary because of the curvature of the dome. The result is an aperture effect that causes an HF roll-off dependant on the height of the dome. In all real dome tweeters, the height of the dome is so small compared to the wavelength of the highest audible frequency that the HF roll off is essentially out of the audio band.

What can be concluded from that? Basically that, for pistonic motion, the dome shape has absolutely no effect whatsoever on the sound radiation on-axis or off-axis. The diaphragm could be a convex dome, a concave dome or absolutely flat and it wouldn’t make any difference. In other words the dome shape is having no effect whatsoever and the directivity is not improved.

It will be recalled that at high frequencies it is not possible for a diaphragm driven by a coil to move pistonically. The finite propagation speed of vibrations through the diaphragm prevents pistonic motion. In the case of a cone-type HF unit, the vibrations from the coil spread outwards across the diaphragm and are absorbed by the roll surround which acts as a terminator.

In a dome driver, the vibrations begin at the outside and travel inwards as shown in Figure 2a. There is nothing to stop them traveling all the way across the dome, where they will not be terminated, but will instead find a mechanical impedance mismatch where the coil and diaphragm are joined, which will reflect them back again. Clearly having vibrations bouncing back and forth across the diaphragm is a recipe for standing waves.

Figure 2. Unlike a cone-type drive unit, the vibrations traveling across a dome, shown in Figure 2a are not terminated but can reflect back. If the dome is damped as shown in Figure 2b, the reflections are prevented, but now the directivity is impaired because at high frequencies the driver becomes a radiating ring. Click to enlarge.

If one imagines a soft dome excited at the perimeter, then the vibrations travel inwards and are absorbed by the lossy material mentioned above. Figure 2b shows that the amplitude of dome motion is greatest at the perimeter and reduces towards the centre. This mechanism is frequency dependent. At high frequency the centre of the dome might not move at all. In the on-axis condition, the result is a mild loss of high frequency output, which is tolerable.

In the previous article, (Loudspeaker Technology Part 9: Methods of Controlling Directivity) it was explained how an ideal tweeter would have a radiating area that became smaller as frequency rose, such that the aperture effect applied to off-axis radiation would be windowed and thereby minimised. In the dome tweeter, this does not happen. Instead as frequency rises the radiation takes place more from the perimeter than from the centre.

Unlike a cone-type tweeter, in which the effective diaphragm gets smaller with frequency as the outer parts of the cone decouple, in the case of the dome tweeter it is the inside of the diaphragm that decouples and it becomes an annular radiator. The aperture to an off axis destination is not windowed. The inevitable result is serious beaming with a fall-off of output off axis. Thus the dome tweeter has exactly the opposite characteristic to the one that is required, a characteristic that is fundamental and about which absolutely nothing can be done.

Another common feature of dome tweeters is that the magnetic circuit behind the diaphragm is solid metal. Sound radiated backwards from the diaphragm bounces off the metal and returns. The soft dome causes insufficient loss to the returning sound which passes through and adds to the direct sound, after a delay due to the extra path length. Essentially the reflection from the pole has created an acoustic comb filter.

In the frequency domain the comb filter makes the frequency response periodic. In the time domain the location of a transient becomes uncertain. The characteristic footprint of the soft dome tweeter will always be there irrespective of manufacturer. The sound is best described as harsh or brittle, as if the waveform had ground glass in it. Frequently the soft dome is found in conjunction with a conventional cone-type woofer in a two-way speaker. The disparity between the characteristics of the two drivers means that the crossover will never succeed and the two parts of the spectrum seem to be quite dissociated. One famous studio monitoring speaker, which was quite good in other respects, especially as the woofer was not ported, was frequently seen with a piece of tissue paper mounted in front of the dome tweeter in order to filter out some of the harshness. 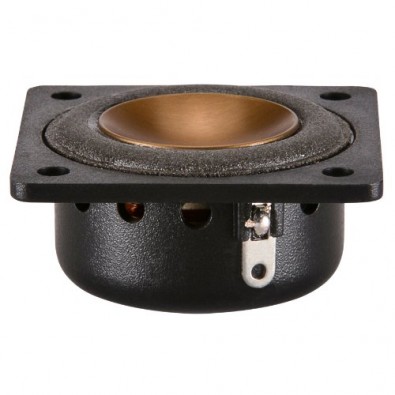 As mentioned above, it makes no sonic difference if the dome is convex or concave, whereas the concave dome is useful in compact devices. Recently a number of concave dome tweeter designs have appeared, with the diaphragm made from aluminium alloy, and some have the centre pole shaped to prevent reflection of the back wave. These devices have eliminated the brittle sound of the soft dome, but the directivity problems remain.

If one had to make a list of all the different type of audio transducer and rank them in order of merit, the soft dome would be near the bottom of the list. It is therefore a great pity that it is in such common use, stomping its footprint over everything it reproduces and condemning its unsuspecting owner to years of listening fatigue.

John Watkinson has authored multiple articles on The Broadcast Bridge. Three articles from the loudspeaker design series are listed below. All of his articles can be found from our home page by searching for the term, "Watkinson."