Perhaps the reason for the popularity of wireless microphones is the fascination with getting rid of cords to all electronic devices — from headphones to personal computers. But one thing is certain, wireless mics are proliferating fast, even though the spectrum for such devices is drying up. For newcomers in the world of wireless technology, here are a few important things to know.

No matter what any manufacturer says about their wireless microphone products, as a category, wireless mics are not as reliable as their wired counterparts. Though today’s wireless models have become very good at what they do, “stuff” happens that can interfere with their performance. Often, it’s unexpected and not so easy to figure out what’s wrong.

When depending on wireless microphones, it’s always good to have one or more wired mics nearby as spares. When a performance is about to begin, using a wired mic can save the day.

First, always carry a copy of the manual that matches the wireless mic system being used. There are a wide variety of makes and models of wireless mics and not all are created equal. Some instructions can even change from model to model within the same brand. Have documentation nearby, even if it’s a PDF file on your smartphone. 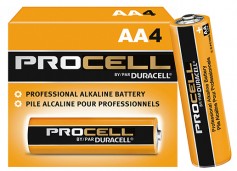 The most common problem with wireless mics are weak batteries, especially in the transmitter. Audio-Technica recommends that every project begin with a fresh pair of batteries in all the wireless components. Also, plan to swap out the batteries for fresh ones after about four hours of use. On video shoots, the lunch break is a good time to change all batteries. Doing this, batteries will never be a problem. Build the cost of fresh batteries into each shoot and have spares readily available.

Traditionally, wireless mic manufacturers have advised against using rechargeable batteries. This is still true of nicad or nickel metal hydride cells, since they tend to drop to a low voltage level fairly quickly. Alkaline batteries start off with a higher voltage that diminishes more gradually. 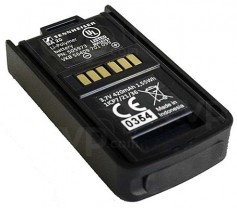 Some newer model wireless systems utilize a built-in lithium-ion rechargeable battery in the receiver that can operate for up to 12 hours. In order to make these batteries last the duration of your shoot, ensure they’re fully charged the night before. If possible, get a spare set of lithium-ion batteries and keep them charged as well.

While it’s often possible to power these systems from a portable USB battery pack in a pinch, it’s easier to avoid the issue altogether. Believe me, not having to worry about low battery warnings makes for a less stressful recording experience.

Next, check all wireless mics and make sure they are set to the best operating frequencies. All pairs of traditional UHF receivers and transmitters need to be set on matching frequencies. To start, select a frequency for the first system and leave them turned on. 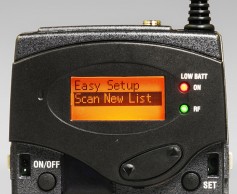 Then, scan the next receiver to choose another frequency and set the matching transmitter. Continue this process for all the systems to be used. Remember, there’s a wide variety of frequencies to choose from, so allow some space in between them. Keep the systems organized by labeling receivers and transmitters that are in the same set.

There may be other radio devices on or close to the chosen frequency. One way to detect interference is to turn off the matching transmitter and watch the indicator light for each receiver antenna. When the transmitter is turned off, neither light should come on at all.

If either antenna light shows any activity, it’s picking up an unwanted signal. It can also help to listen to the receiver for any electronic chatter. All manufacturers include additional frequency information in the manual or online for reference.

Some of the newer wireless systems on the market operate in the 2.4 GHz range and are frequency adaptive. They automatically change frequencies to avoid interference. Simply pair those systems to each other. Wireless mics like Sennheiser’s AVX are no brainer’s for beginners.

The choice of microphones chosen affects wireless mic sound. High-quality lavalier mics are common in wireless systems, but the difference in mic quality will affect the sound. Don’t use cheap, no-name lavs. The low price is probably because the manufacturing is below par. You normally have to pay for good sound.

To set the mic input level on the wireless transmitter, plug headphones into the receiver. Start with the knob turned to the lowest possible position. While speaking into the mic, raise the level gradually until it begins to sound clear and bright. The peak indicator should not come on steady, but should flash occasionally with loud transients.

An XLR-to-transmitter audio input cable is a good accessory for using other microphones than a lavalier. This cable offers a female input for microphones or boom poles. If the mic requires phantom power, some sort of inline battery power supply will be needed. The cable can be used to transmit an audio feed from a mixing board to a camcorder. 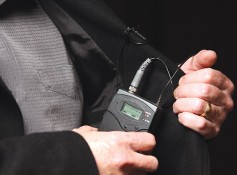 Belt and pouch kits are also a good accessory. They’re used to secure body-pack transmitters to talent. The pouch holds the transmitter and, with safety pins, can be fixed to the inside of clothes that lack pockets or provisions for a metal belt clip.

Also, when rigging a body-pack transmitter on the talent, take care not to cross the microphone line with the antenna. To keep this from happening, simply flip the body-pack around so that the two never cross.

It’s acceptable to bunch the excess line from the mic together, but make certain the antenna remains as straight as possible. Soft or easily flexible antennas can be kept straight by slipping a rubber band over the tip and using a safety pin to keep the antenna in position. The rubber band will stretch with the subject’s movements or will break if they put too much strain on the pinned antenna.

Audio-Technica notes that radio waves between the wireless transmitter and receiver can be deflected or even absorbed by human bodies, metal stands, electronic equipment, power cables metal furnishings or props. To improve the wireless path, it’s generally easier to remote an entire portable receiver.

Although some receivers have BNC mounts that readily allow the use of RF cables to remotely mount antennas, there are systems that can easily improve the wireless path by allowing the use of an Ethernet cable to remote the receiver modules.

Additionally, a good strategy is to shorten the path and avoid RF obstacles by setting up the portable receivers closer to the talent, on the edge of the set or hidden within the set, then run balanced audio cables back to the recorder.

Finally, be aware there are major changes going on now involving wireless microphones. Beginning later this year, the amount of TV band spectrum available for wireless use is decreasing as a result of the broadcast incentive auction, which was completed on April 13, 2017.

A significant portion of the TV band spectrum in the 600 MHz band, including most (but not all) of the spectrum on TV channels 38-51 (614-698 MHz), has been repurposed for the new 600 MHz service band for use by wireless services, and will not continue to be available for wireless microphone use.

Specifically, wireless microphones that operate in the new 600 MHz service band (the 617-652 MHz and 663-698 MHz frequencies) will be required to cease operation no later than July 13, 2020, and may be required to cease operation sooner if they cause interference to new wireless licensees that commence operations on their licensed spectrum in the 600 MHz service band.

The FCC said recently that spectrum will continue to be available for wireless microphone use on the other TV channels 2-36 (TV band frequencies that fall below 608 MHz), on portions of the 600 MHz guard band (the 614-616 MHz frequencies) and the 600 MHz duplex gap (the 653-663 MHz frequencies), and in various other spectrum bands outside of the TV bands.

Though this may be too technical for many small users, wireless microphone manufacturers are keeping up with it and are posting constant updates. Follow them. Some are offering trade-in deals to keep their systems legal. As a wireless mic user, it’s your responsibility to keep up on the regulations.