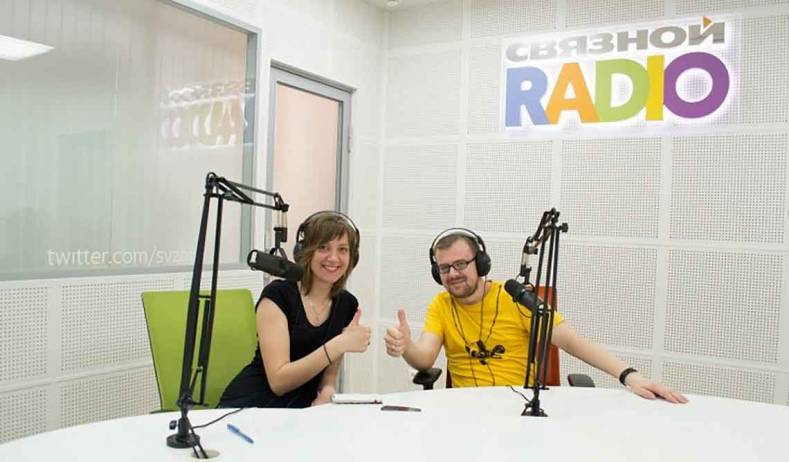 Retail network Svyaznoy wanted to add live commercials in its stores, so it decided to build its own radio station, complete with a video co

In many cities, radio stations have become the new TV stations. Radio stations gain visibility (literally), the station talent gains additional exposure and radio becomes more of a two-way experience for listeners/viewers. In addition, co-owned TV stations often do break-in interview segments with their partner radio stations as a form of cross promotion. The news casters and DJs banter for a couple of minutes resulting in good publicity for both stations. 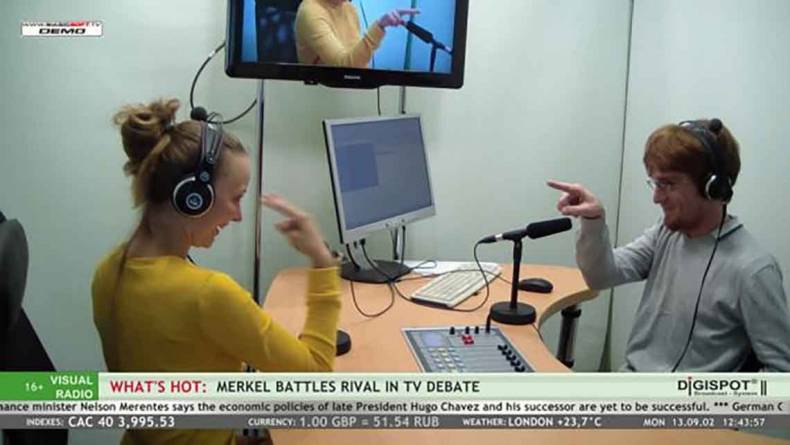 Here two announcers banter, the streaming feed can be seen on the wall behind them.

However, to make all this video for radio happen, requires expertise. This is where DIGISPOT System GmbH comes in.  The company was established in 2010 as a new, standalone engineering company for the distribution and system installation of the DIGISPOTII Radio and TV Broadcast Software System. The software and is now used in more than 1000 radio stations in Germany, Russia and other countries worldwide.

DIGISPOT has added video options to its software to enable radio stations to become TV-station like and broadcast video/audio on the Internet.

What does a listener see?
A listener sees images captured by one several cameras installed in the studio. Or, the system can play video clips; music videos, video backgrounds or recorded programs. Many types of information can be added to these images. Video could include station or program logos, text including breaking news, or weather forecasts. Some stations use video to promo upcoming programs, or as HD Radio in North American does, music track information about the cuts being played on air can be displayed.

What are the benefits for a radio station?
Having video available to a radio station opens a whole world of new opportunities for both station promotion and sales. Experiments and experience gathered at some Moscow-based radio stations confirmed that the listeners are interested in seeing the faces of their favorite DJs and guests, they also enjoy music videos and on-the-spot live reports. 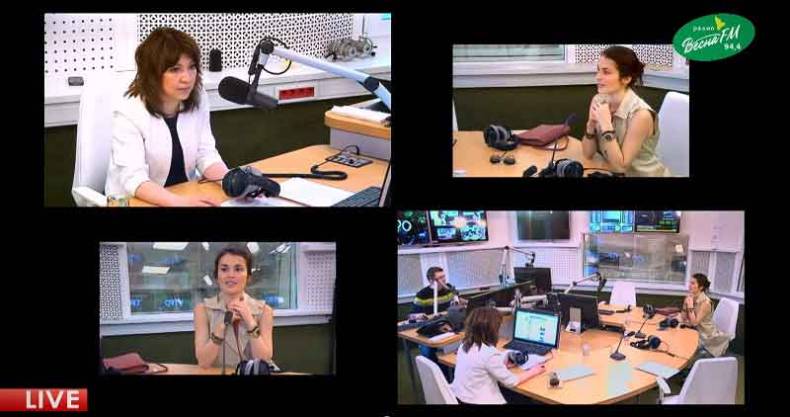 This promo image shows Moscow’s Vesna FM studio from several angles. Note also the streaming feeds displayed on the monitors behind the announcers.

Visual ads are not limited to commercial blocks. In fact, they can be placed at any moment, whether tied to a program (context ads) or independently (background ads).

The concept of Visual Radio?
Visual Radio is first and foremost a form of radio. The main idea is to preserve the leading role of the radio program. The additional video tasks are handled by DIGISPOT automation. The result is video of what’s happening in the studio that is streamed in parallel with the audio with most of the processes being completely automated.

Another, no less important principle is economic feasibility. Because radio station budgets are significantly smaller than that of a television station, the solution must be affordable. The solution relies on automation to manage the bulk of the video processes, switching between cameras, layering of graphics, ect. and live, creative broadcasting with the participation of the staff. The result becomes an inexpensive to create and entertaining radio program.

The gear
Building video for radio requires some basic video equipment. This will include several cameras, additional lighting and a grip system. In addition, you’ll need a radio automation system that can manage the presentation of graphics, commercial videos and manage live studio shots.

To produce the graphics and commercials, the station will need a small video mixer, video monitors, a graphics system and video storage. Finally, an internet streaming encoder must be added to get the video/audio program onto the Internet.

Perhaps not surprising, a moderately priced PC can provide many of these production functions. Or, there are plenty of companies that make the bits and pieces to create a working kit.

Recommendations
Because the staff will be focused on doing radio, the additional video duties must be few and simple to do. First, rely on remotely controlled motorized PTZ (pan-tilt-zoom) cameras. Such cameras’ prices range from very economical to astronomical. Choose the former and let the automation system move them. Cameras with remote control have a big advantage – they can switch between preset views during live air resulting in a more dynamic-looking program.

Do not use IP cameras because they almost never allow synchronization of incoming video with audio. And, they perform their own encoding using maximum compression, which will significantly reduce image quality.

Lighting
An entire chapter could be devoted to lighting the studio. However, if nothing else just remember—use LED lighting. Energy costs are far less and the staff will wilt under the heat produced by tungsten or halogen lighting. Besides, most radio studios would not have sufficient AC power or HVAC to use tungsten or halogen lights. Bottom line, you will need to add some lighting, otherwise the announcers will have a dark cast on their faces and the studios will look more like caves than inviting places to work. LED lamps will solve those problems. 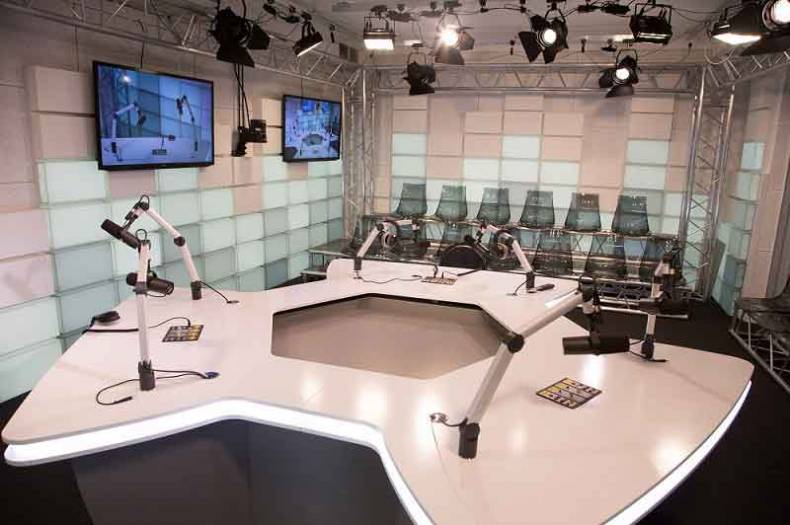 Note the lighting grid and LED lamps used in the Moscow’s Sport FM studio, which also has seating for a live audience.

The art of presentation
The basic principle of automating the video portion of a radio show is simple, mic on, camera on, mic off, camera off. However, if this is all your automation system can do, your video show will quickly get boring.

Once the video/audio is created, it must be encoded for the Internet and handed off to either the station’s URL or content delivery network. This will require some research as CDN services are not free and you’ll need to decide how broad an audience you want to reach (local, national, global). Each option comes with their own costs. 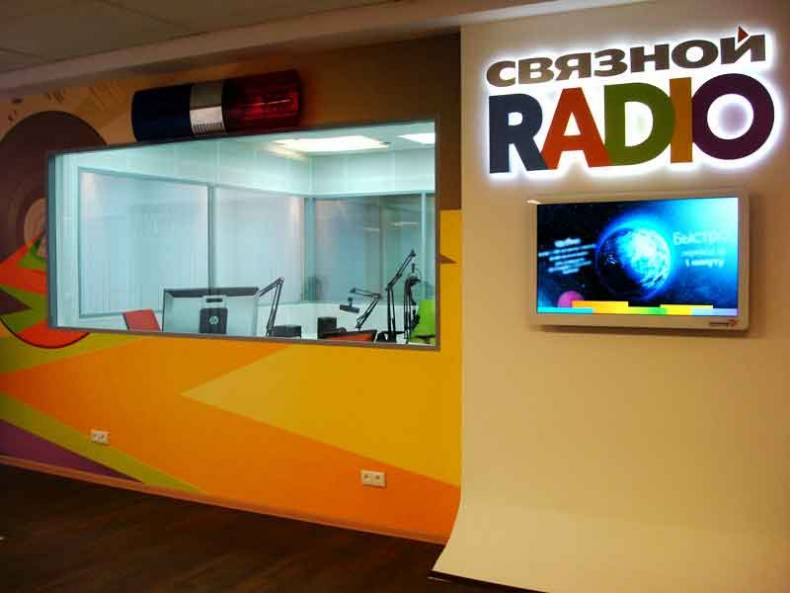 The Svyaznoy retail network created a radio station so it could produce commercials for its line of retail stores. Note the commercial playing in the upper right portion of the image.

Build content
Any radio station that decides “to go video”, should be ready to take on the task of preparing adequate quantities of high-quality video content:

Radio visualization configurations
Before starting to work on a solution it is important to define the desired “depth” of visualization, depending on radio station’s tasks and its re-fitting possibilities.

We mention three main visualization configurations for our clients (some transitory variants between these three are also possible):

Making the decision to add video to a radio station’s signal should be carefully thought out. The presentation needs to look professional in every aspect. Don’t expect your audio staff to be able to accomplish all of the needed tasks to convert to video. Finally, seek outside expertise and a quality equipment manufacturer/vendor with experience in this type of conversion.