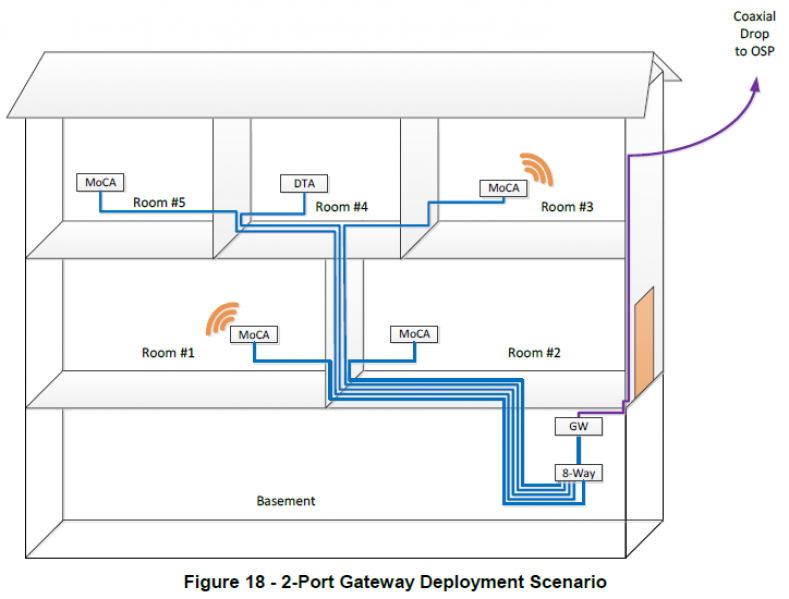 MoCA is offering a two-port gateway scenario under the new guidelines for Docsis coexistence.

The cable TV industry has received a boost with announcement of new guidelines for interoperability between the latest DOCSIS 3.1 specification for advanced broadband services and the MoCA 2.0 (Multimedia over Coax Alliance) standards for data transmission over coaxial home networks.

This is particularly relevant in the US where homes have been widely cabled with coax, although MoCA is also quite prevalent in some other markets, including many continental European MDUs (Multi Dwelling Units).

The guidelines have been published jointly by the Society of Cable Telecommunications Engineers (SCTE) and the Multimedia over Coax Alliance (MoCA), which are respectively responsible for DOCSIS and MoCA standards. The SCTE’s global arm, the International Society of Broadband Experts (ISBE) was also involved in this new SCTE 235, Operational Practice for the Coexistence of DOCSIS 3.1 Signals and MoCA Signals in the Home Environment.

The issue addressed by SCTE 235 is the spectrum clash between DOCSIS 3.1 and MoCA that arose because the former extended into frequencies above 1 GHZ in order to increase data capacity. This overlaps with the frequencies used by MoCA, so that filters and spectrum plans must be employed by cable industry technicians, equipment designers and others to avoid interference and deliver optimal performance in environments where DOCSIS 3.1 and MoCA 2.0 coexist.

The early versions of DOCSIS brought no conflict, because they stuck to frequencies below 1 GHz, while MoCA largely for that reason occupied the higher band between 1.125 GHz and 1.675 GHz. But the cable industry decided it needed to extend above 1 GHz for increased data capacity to the home driven by migration towards IP for video services coupled with ever higher resolutions. So with DOCSIS 3.1 in the wings, the SCTE and MoCA have been working on these guidelines for several years with both groups publishing documents analyzing coexistence requirements and assessing operational guidelines in 2015. This in turn led to the combined document now, which also sets the stage for future FTTP (Fiber To The Premise) services after which there may no longer be a frequency clash in the RF domain.

The SCTE 235 guidelines also cater for existing home networks where DOCSIS and MoCA may coexist over the same wiring and require a one port solution where interference is avoided through use of separate bands within that higher frequency range above 1 GHz, or via filtering.

These options all require filtering external to the gateway. However the best option in the longer term, supported by the SCTE 235 guidelines, will be to replace legacy equipment with two port gateways incorporating the filtering internally to separate the incoming DOCSIS from the home MoCA network. This would not remove the challenges of isolating the two, but by internalizing them to the gateway would provide several key benefits to operators and consumers. It would avoid passing DOCSIS RF signals into the home, eliminate need for external filters and free up all the spectrum either side so that both DOCSIS and MoCA could exploit their respective full frequency bands. That after all was the whole point of going above 1 GHz in the first place.