The Situation. The age of loudness compliance is upon us, with governments around the world adopting variations of ITU-R BS.1770-3 standard for all terrestrial broadcast, cable television, direct-broadcast satellite and IPTV programs. What this means for the broadcast/content provider is that loudness compliance now has the force of law behind it, making accurate logging of all disseminated materials a necessity. The current ITU standard, 1770-3 (August 2012), builds upon 1770-1 (2006) and 1770-2 (March, 2011), which makes loudness compliance somewhat of a moving target, requiring specialized monitoring equipment that is software-based to accommodate standards updates. Local variations of ITU 1770 are found in the CALM Act in the U.S. with ATSC A/85:2013, the European EBU R128 standard, TR-B32 in Japan and the Australian PO-59, among many others coming online. For the broadcaster, monitoring the video and audio integrity of a signal as the final step before dissemination is no longer enough, necessitating installing a system that will provide both signal integrity and loudness compliance monitoring in one package.

The Problem
Loudness standards came to the forefront of governmental broadcast regulations, stemming from viewer complaints of advertisements that were significantly louder than program levels. The idea was to set standards on how to tie subjective variations of loudness over time into a useable mathematical algorithm. This process superseded simple peak to peak metering as, for example, an action movie gunshot might momentarily exceed loudness limits, but over time this one sound would not put the entire program in violation. If, however, the gun shot escalated into a gun fight for several minutes, the track during that time might indeed be in violation.Clearly a metering solution that averaged levels over time was necessary over traditional VU and peak metering, and ITU-R BS.1770 was the result.

Adding to the compliance equation are locally produced ads that are purposefully produced to be loud and, therefore need to be accurately logged. Additionally, some ad agencies have begun to hyper-compress tracks, offering brick wall dynamics to try to maintain loudness compliance while still having an ad that is objectively louder than a program track. While major broadcasters and high-end agencies are certainly working together to stay compliant, smaller, local stations and advertising providers are still working things out. That being said, the force of law falls first on the broadcaster and that means having equipment in place to constantly monitor both signal integrity and loudness compliance as it leaves the facility to the outside world.

Even though ITU 1770 is an international standard, each world region has adopted variations, which broadcasters need to be aware of when transmitting programming produced in other countries. A football game produced in Brazil, for example, might be broadcast to homes in the U.S. and in Europe. As ATSC A/85 in the U.S. is slightly different than EBU R128 in Europe, it is conceivable that a program compliant in the U.S. might not be compliant in Europe. The onus is on the broadcaster to sort out the loudness compliance of all disseminated programming material, so keeping a running log of such compliance to avoid litigation is needed.

Weighty Solutions
Buying gear that is specifically designed to monitor loudness compliance is a must have in today’s broadcasting environment. While easier said than done, loudness compliance measuring involves several key features to accomplish the end goal of compliance with ITU-R BS.1770-3 that defines both program loudness and what is called ‘true peak levels.’

K-Weighting defines the process of mathematically measuring the illusive perceived loudness of program material. The K-Weighted filter curve is applied to audio channels in an attempt to link the subjective experience of listening to a program, based on extensive human listening tests, with an applied math solution that can be measured, stored and recalled.

The other term to go along with LKFS or LUFS is LU, or Loudness Unit, which expresses differences between loudness levels in one decibel increments on a relative scale. This is not the entire story, however, as both ATSC A-85 and EBU R128 interpretations of ITU-R BS.1770-3 also deal with signal tolerances and True Peak Level limits. All loudness applications are applied over time to arrive at a reasonable definition of compliance.

Gating threshold levels is one area that can be different between various international implementations of loudness algorithms. For example, over a 20-minute program there might be sections that are very quiet, so looking at a compliance metering chart of that program over time will present a greater loudness range, or variation of loudness, measurement in LU. A gating function imposes a limit below which metering does not take place, thereby eliminating the lower sections and maintaining more consistent target levels. Imposing gating at the 10 percent and 95 percent ranges allows for quiet sections and the random loud section (the gun shot) to not increase the Loudness Range over the course of the program. The gating levels might be different, however, from our example, so the final compliance result can possibly vary from one country to the next. All these factors mandate loudness compliance equipment that can be upgradeable to match evolving standards.

The Comprehensive Solution
With programming available locally and internationally, often with several multi-lingual audio tracks, it is incumbent to employ a solution that can give the broadcaster the assurance that everything is tidy regarding signal integrity while ensuring compliance with new and emerging loudness standards. The Cobalt Digital SpotCheck system elegantly accomplishes both the signal integrity and loudness compliance missions within one system. SpotCheck is a streaming base processor that gives a final look at a signal going out for broadcast. In essence, SpotCheck sees and hears what the home audience sees and hears, sending out alarms if the video or audio, or both, is lost, logs programming for sales assurance and performs the necessary ITU 1770 loudness compliance operations. 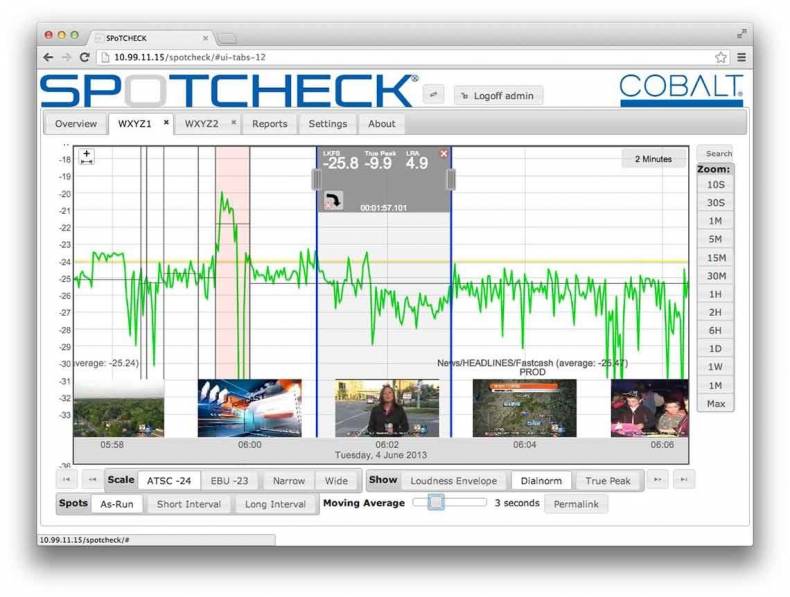 Regarding loudness compliance, SpotCheck provides easy-to-use, no-guesswork, automatic A/85 and EBU R128 loudness measurement and archives all audio loudness records for future access. Because the system monitors an IP, ASI, or a transmitted over-the-air MPEG stream at the transmit (emission) encode point, SpotCheck measures and logs loudness for all programming emanating from the facility.

Segments can be searched using date-time with the intuitive display of loudness plots along with date-time-stamped thumbnails of the actual corresponding programming, or can be queried and correlated with a facility as-run automation list. The solution readily pinpoints any segments that are out of CALM ATSC A/85 or EBU R128 compliance, documenting compliance issues should an erroneous complaint appear prompting legal action.

The system’s intuitive web interface provides for easy setup and use. Requiring no breakout from the MPEG stream and not affecting the emission stream in any way, SpotCheck integrates into any existing infrastructure without difficulty, yielding a facility-based, solution for loudness records, compliance verification and signal integrity.

While compliance is a big component, sales proof is another benefit of the solution. SpotCheck creates a down res file of the programming stream so verification is straightforward, giving management the capability to substantiate any client claims about whether or not a segment ran at a particular time. Further, if there is a problem with the data stream, the appropriate engineer or program manager can receive an instant notification E-mail, alerting staff of the problem.

Closed Captioning
Throughout the world authorities are legislating for broadcast companies to comply with closed captioning requirements (commonly known as Teletext in Europe, but slowly changing to Closed Captioning).

In the USA, On February 20, 2014, the FCC unanimously approved the implementation of quality standards for closed captioning, addressing accuracy, timing, completeness, and placement. This is the first time the FCC has addressed quality issues in captions.

The Cobalt Digital SpotCheck unit has been updated to provide all necessary information to the broadcaster displaying compliance (or otherwise) on a real time and recorded basis. Everything from graphical representation, spot proof of evidence, to the complete closed captioning text, when required. Proof of closed captioning can be displayed in graph form as well as providing actual text.

The SpotCheck unit now provides all necessary information and evidence for proof of compliance for both loudness processing for ATSC and EBU R128 (DVB), and also international needs for closed captioning.

The solution supports the following formats: