What’s the difference between mic and line level audio? If you think this basic question is overly simple, you might be surprised to learn that many people working in pro audio today don’t know the difference. An explanation is in order.

Both mic and line level audio refer to the voltage level of an audio signal. Wired and wireless microphones are typically connected to mic-level inputs, while most other audio devices — such as mixers and outputs of mic preamps — use line level. The voltage of each type of signal varies significantly, making it important for operators to know how they differ.

Shure, the microphone manufacturer, recently did a white paper explaining the difference between mic and line level. We’ll use it for reference.

Shure notes that a microphone-level signal describes the voltage generated by a microphone when it picks up sound, typically just a few thousandths of a volt. This voltage varies in response to changes in sound level and distance.

Of the four main types of audio signals, microphone level is the weakest and requires a pre-amplifier to bring it up to line level. Microphone level is usually specified between -60 and -40 dBu. (dBu and dBV are decibel measurements relative to voltage.) 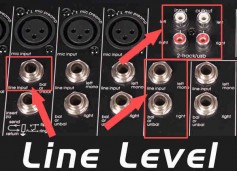 Several different types of devices are used to boost microphone levels to line–level signals. Mixers are probably the most popular piece of equipment, since they can also combine multiple signals together into a single output. Preamplifiers and mic-to-line amplifiers also do the job just as well and are available as single-channel or multi-channel devices.

A line-level signal is about one volt, or about 1,000 times as strong as a mic-level signal. The two signal types do not ordinarily use the same input. This signal travels from your pre-amp to the amplifier.

Shure said there are two standard line levels: +4 dBu for professional equipment (mixing desks and signal processing gear) and -10 dBV for consumer equipment such as DVD and audio players. 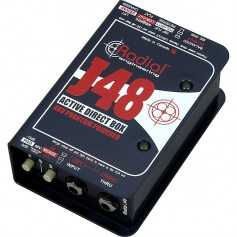 It’s critical to match a device to the correct input, since there’s no technical tolerance for mistakes. Otherwise, it fails. For example, connecting a microphone to a line-level input will result in almost no sound at all since the mic-level signal is too weak to drive the line-level input.

Also, connecting a line-level source to a mic-level input will cause the sound to be loud and distorted because the line-level signal is much stronger than what the mic input will accept. (Of course, inputs and outputs on some higher-end mixers are mic and line level switchable to accomodate this.) 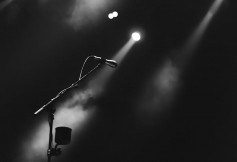 If there is only a microphone input on a device and the user needs to connect a line level device to it, it can be done by reducing the voltage by using an attenuator or a DI (direct injection) box. These are staple items in most sound operator’s toolkits.

Also, note that different wireless receivers have different output levels. This is true for all brands. Operators need to know the output signal level of each wireless receiver. And mic levels can vary as much as 20 dB between different receivers, another important spec to know. Don’t assume one wireless unit is like all others, even if the same brand.

This is all basic information — if the sound operator knows it. If he or she doesn’t, then some quick training is needed.