Today — for all but a few well endowed recordists — the new studio is in a home, office or makeshift location. The era of big, professionally-designed recording studios is mostly history. With this new reality comes the need to treat the acoustics of rooms never designed to be studios. It can be a challenge without facts on your side.

Picking microphones, preamps and monitors is a piece of cake compared to fixing the wild and often bizarre acoustics of a room. Every sound in the space comes in contact with a surface and is either absorbed or bounced back. Unless you have some understanding of what is happening, no amount of high-end gear can make it sound good. 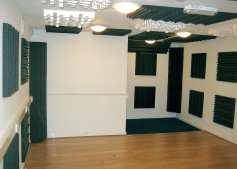 Sound travels and is affected by the path it’s on, often resulting in sonic anomalies. It might get reflected and/or absorbed based on a number of factors. The noise in a room is also interacting with other sounds that are traveling in its path, further affecting the sound of the room. It can get confusing fast.

One of the keys to accurately monitoring a recording or to getting good, clean sound is controlling or completely removing the sound of the room. The recordist usually wants to hear (and record) only the source, not what’s bouncing off the walls. 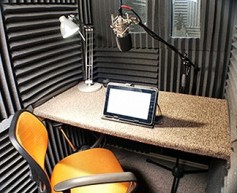 Acoustic treatment is the best way to ensure that what’s being composed, mixed and edited is accurate and unaffected by the room. Even if a live vibe is desired in a recording, control over the sound is still essential.

When two parallel surfaces reflecting sound between one another are far enough apart, the listener hears the reflections between them. This is flutter echo. The audible effect is in many cases a fluttering sound since the echoes occur in rapid succession. In smaller rooms, it can take on a tube-like, hollow sound as the echoes are closer together. A combination of absorption and diffusion is needed to defeat flutter echo.

First, there’s absorption. In the form of acoustical foam, it is well suited to alleviate flutter echo and slap. These are the two most common problems in rooms that aren’t designed for recording. Clap your hands in an open room and the resulting sound can be terrible for recording or mixing.

Acoustical foam is easy to work with, simple to trim to size and cost-effective. It will help improve the sound picked up by microphones and give you a more accurate monitoring environment. This ensures that recordings will sound better wherever they’re played.

In a monitoring environment, foam allows one to hear recorded works the way the artist intended, without the room detrimentally modifying the sound.

Diffusion, on the other hand, prevents sound waves from amassing, so there are few to no hot spots in a room. It disrupts standing waves and flutter echoes, without removing acoustic energy from the space or changing the frequency content of the sound.

Diffusion can make a small space seem large and a large space seem even larger. The proper balance of diffusive and absorptive surfaces varies with room size, function and desired results.

Bass traps are for low-frequency sound waves, which can be difficult to control. This is true whether the recordist is attempting to block their transmission to a neighboring space or absorb them to clean up the low-frequency response within a room.

Low frequencies tend to collect in corners and cause problems, such as boosting the apparent amount of bass in the room. Therefore, corner bass trapping is vital to smoothing out any room’s sound.

A major question that arises is how much acoustic coverage should one use in a space. Most rooms usually fall in the 25 to 75 percent coverage range for walls and ceilings. This mainly depends on the room’s design, the recordist’s intentions for the room and even the style of content or music being recorded.

The control room should be more dead than the main recording room. Diffusion is used more generously in these types of control rooms.

Live rooms vary a lot. Some well-designed live rooms can get by with 20 percent coverage or less. However, most fall into the 25 to 50 percent range. This is usually a healthy mix of absorption and diffusion. The most successful live rooms usually have some degree of variability.

Isolation booths for vocals or narration usually call for 75 percent absorption or more.

Determining where to hang the acoustic treatment is both an art and a science. It’s based on the recordist’s goals, room function and room design. Treatment placement is a discretionary call, but keep in mind that once bad room sound is recorded it’s there forever.

Many studio designers claim that the front of the room (walls and ceiling) should be treated with absorption of some sort, perhaps as far back as the engineer. The ceiling from the engineer back can contain a mix of diffusion and absorption.

However, other designers feel that the rear wall should feature a diffuser array surrounded by broad-bandwidth absorption. The sidewalls from the engineer’s position on back can be alternately absorptive and diffusive.

If the budget is limited, the treatment around the mixing area should take priority over the rest of the room. This will give a tight, controlled listening area.

If you’re building an isolation booth or a tracking area, consider a completely absorptive environment, starting from the top of the wall down to about knee-height or lower. This will allow control of sonic variables of the recording in the mix by adding reverb, EQ and other effects.

However, it’s subjective. Some performers feel trapped by a booth that is completely dead, so recordists might consider adding some diffusion.

One of the biggest concepts to understand and appreciate is that acoustic foam and diffusors aren’t going to soundproof any room. These are extremely effective treatments for ambient and reflected sound. They can help make rooms sound better.

But they really don’t provide enough sound-isolating properties to keep sound in or out of a room. Do not confuse it with sound proofing. 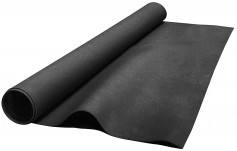 Air gaps between existing and new walls should, if possible, be at least two inches wide. The combination of density and air gaps will result in isolation. The amount depends mostly on the quality of the workmanship.

In a pinch, SheetBlok sandwiched between two layers of drywall offers high density. But this alone won’t completely soundproof a room.

In rooms not designed for recording, “floating” via a separate floor system and double walls (thus creating necessary air gaps and decoupling) is an expensive proposition, but the SheetBlok sandwich might be a functional possibility.

If you are not an expert at acoustic design, find someone who is. Sweetwater and Auralex help their customers with specific problems. Other vendors do as well. And there is always an acoustic expert, who for a price, will analyze your space and make it sound as good as possible.

Remember, it is impossible to get the sound of a professional studio from a space built as a spare bedroom. Professional studios focus on acoustic design, not something found in most residential or office construction today. That said, most spaces can be made usable with some planning, knowledge and a small amount of money.