Setting-up a microphone preamp may seem like a friviolous subject. But microphones have an extraordinary dynamic range and the configuration to match the pre-amp to the mic can be an important factor in getting good levels for recording or live sound. Here’s a guide to the correct set-up considerations.

Depending on the microphone, each can produce a very low or a fairly high output level. The key task of a microphone preamp, in addition to coloring the sound, is to convert the output of the microphone to line level. Since most microphones are far below line level, setting the gain control properly is a critical task in audio quality.

How much gain is required for a microphone? It depends on the sound source. Less gain is needed for a soft voice, as opposed to a screaming rock singer. The recording distance from the micropone also makes a difference. Close miking requires less gain than a more distant mic position. 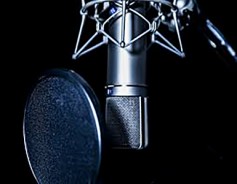 Microphone sensitivity has to be taken into the equation as well. Condenser microphones usually have a high output level, while dynamic and ribbon microphones require much more gain due to their low sensitivity.

Three variables dictate pre-amp set-up. One, the loudness of the sound source; two, the microphone distance; and, three, the microphone’s sensitivity. Because the subject is a bit more complex than meets the eye, Neumann has written a whitepaper on preamp set-up. It’s a good reference.

Neumann says it is usually best to just rely on the level meter in your recording software of the digital audio workstation (DAW). The preamp may have a VU meter, too, which is helpful to get the recordist in the right ballpark. But most hardware meters are too slow to catch fast attacks. The most reliable meter is the one in the DAW software, because it is directly linked to the AD-converters of the audio interface. 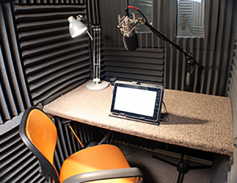 The most common mistake, Neumann said, is to record levels too “hot.” In the era of analog tape, engineers recorded with as much level as possible in order to overcome the tape hiss. Overdriving the tape became popular, because the saturated tape produced a unique type of compression that sounded excellent on instruments like drums and guitars.

Digital recording is different. There is neither tape compression nor tape hiss. Neumann said there is nothing to be gained today by recording with “hot” levels. Digital media sound is the same at any level. There is no such thing as gradual distortion. When digital converters clip, they go from the correct level directly to distortion. Digital clipping sounds terrible and should always be avoided.

Because distortion behavior is different between analog and digital technology, level meters on analog and digital equipment use different scales. On analog meters, the nominal operating level is marked 0 dB VU, and there’s additional headroom of roughly 20 dB with gradually increasing distortion. So the scale goes from minus infinity to about +20 dB VU (give or take a few decibels). 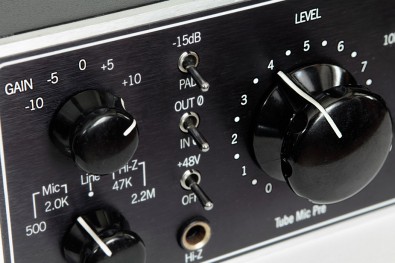 The digital level meter in recording software has no headroom above 0 dB. It goes from minus infinity to 0 dBFS (FS stands for full scale). Since there is no headroom above 0 dBFS, it’s up to the operator to leave a safety margin for accidental peaks. The easiest way to dial in the proper amount of gain is to make a test recording.

A simple guideline is to set the gain control so the highest peaks are at least 10dB below 0 dBFS. Take into consideration that performers tend to be louder on an actual recording than during a test recording. It is slightly lower than the test gain. The operator can always make the signal louder later on in the DAW, but digital clipping can’t be undone.

Some mic preamps have more than one knob to set the level. There may be a gain control and a level control. The functions of which vary from model to model, so it’s a good idea to have a look at the manual. Many high quality preamps have a stepped gain control plus a continuous trim potentiometer to achieve in-between values.

On other preamp models you may find a gain control (stepped or continuous) plus an output level pot, which acts like a fader. This allows users to create analog distortion or saturation effects.

Turn up the gain control more than is actually required so the preamp’s input stage overdrives the preamp’s output stage. Then attenuate the signal using the output level control to avoid digital clipping in the audio interface/AD-converters. That’s one way to achieve analog “crunch” in the digital era.

Conversely, if what is desired is pristine and undistorted sound, turn up the output level and use no more input gain than is necessary to avoid internal distortion. Depending on how the input gain (left) and the big level pot (right) is set, the recordist can achieve either a clean sound or various degrees of saturation.

In rare cases, microphones produce too much level, so the signal has to be attenuated to avoid clipping in the AD-converter. That’s when a pad is useful. However, pad switches are often used incorrectly or at the wrong stage.

If you’re certain neither your converters nor your preamp distorts, engage the pad switch on your microphone. The pad on a microphone attenuates the signal at the capsule, before it hits the microphone electronics, which worsens the noise performance and may affect the sound quality. Therefore, the microphone pad switch should always be the last resort.

Most of today’s high quality studio microphones can handle very high sound pressure levels and often come without a pad. Unlike pad switches, it doesn’t make much of a difference whether one uses the low cut on the microphone or on the preamp.

Using a low cut at the recording stage makes sense if rumble could ruin the recoding. A low cut is also helpful if the sound is so boomy that it’s hard for the performers to monitor themselves properly. In other cases, it’s usually best to disengage any hardware low cut filters and cut excess bass in the recording software. 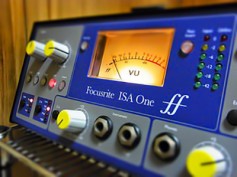 A fully featured mic preamp has pad and polarity switches as well as variable input impedance. This switch does not affect the sound, it only inverts the signal polarity. The signal polarity becomes an issue if a sound source is captured by more than one microphone.

This phase switch can be important for vocal recordings, especially in voice over situations. Only if both signals are in-phase, will the voice performer have optimal monitoring which is important for proper intonation. The engineer won’t hear the difference in the control room, only the talent in front of the mic can hear it.

So, when doing a soundcheck, try both positions of the phase switch and ask the voice performer, which gives him or her a fuller, more direct vocal sound. It can make in a difference in their performance.

Like so many of the techniques that make-up the skill set of professional recordists, proper set-up of mic preamps is very basic, but essential, knowledge in ensuring good recordings.