The forthcoming transition to ATSC 3.0 will usher in the need for higher data rates and more channel capacity in the over-the-air architecture. Broadcasters will apply their experience as “Bit Managers” in the studio infrastructure to the RF operation, with the knowledge that more power leads to higher quality of service (QoS).

The ATSC 3.0 transition will largely follow the multi-year spectrum repack process now underway. As a result of repack, there is likely to be more co-located channel sharing requiring broadband antenna systems with the central high power antenna retaining full ERP status. The use of physical layer pipes (PLP’s) – an integral reason for the flexibility broadcasters find in the DVB-T2 standard, but a new concept to US broadcasters – will allow for business models to evolve based on the incorporation of new over-the-air services. Similarly, broadcasters will have the ability to tailor areas for fixed (rooftop reception), nomadic (stationary or slow moving reception at a variety of locations), and mobile (fast moving, vehicular reception) services within the coverage umbrella.

To take full advantage of these efficiencies, the antenna must be able to adapt to provide the necessary signal strength in the desired locations. Furthermore, as stations progress through the repack, now is the time for broadcasters to begin planning for future strategies and services as part of their ATSC 3.0 antenna systems design.

The idea of future proofing a high-power broadcast antenna in anticipation of next generation broadcast requirements should first be considered. In any of the proposed next-generation systems under the ATSC 3.0 standard, the digital bandwidth is not limited by the number of users, but by the data rate supported within a given carrier to noise ratio (C/N). Increasing the capacity is not done by reducing the traffic, but by increasing the amount of throughput that can be delivered. The design objective for next-generation broadcast antennas may encompass the need to provide a system that is capable of controlling the signal strength and thus the C/N versus the distance from the tower. This will allow for service specific robustness to be delivered to selected areas within the coverage range.

Physical layer pipes (PLP) allow the broadcaster to offer a variety of business models within the licensed coverage area. Since every PLP can have its own modulation and forward error coding (FEC), different levels of robustness and QoS can be broadcast within the channel. For example, the channel can be split into 3 PLP’s: one for HD/Data services, a second for nomadic SD services and a third for mobile services. 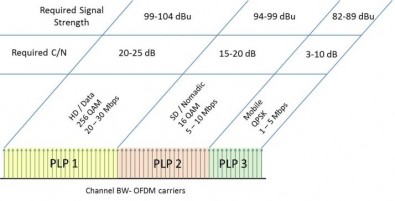 Figure 1. The use of Physical Layer Pipes allows the broadcaster to offer a variety of business models within a coverage area. Click to enlarge.

As shown in Figure 1, it is clear that in each case the bit rates for each PLP within the channel are different and will require different corresponding carrier to noise ratios (C/N’s). In order to tailor the desired service to specific locations within the coverage area, the signal strength versus distance from the tower must be a controllable feature of the antenna.

Service area specific robustness can be achieved through the use of PLP’s and signal strength concentration methods provided by the antenna. Consider an urban broadcast site located in the heart of a dense population. With the increasing expectation of high indoor QoS, the future goal will be to provide as much signal strength as possible in the immediate coverage area, providing high data rates with sufficient building penetration. Moving beyond the metropolitan area, where building penetration may not be required, nomadic services maybe preferred. Outside of this area, mobile services using a lower level of modulation for reliable reception can be considered. In order to accommodate high data rate services outside of the immediate coverage area, on-channel gap filling repeater sites can provide pockets of high signal strength. See Figure 2. 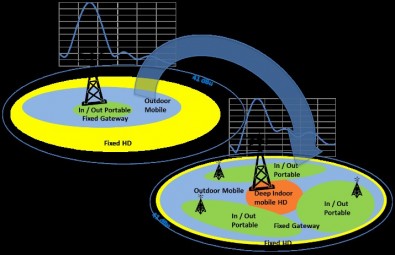 The use of Remote Electric Tilt is common practice in today’s wireless industry to reduce coverage area. Increasing the beam tilt also increases the signal strength near to the tower since the energy is concentrated to a smaller region. Unfortunately for broadcasters with higher gain antennas with narrow main beams radiating from much higher elevations, this is a very inefficient method to produce immediate vicinity saturation. Figure 3 helps to illustrate the effect of increasing the beam tilt with a high gain antenna. A simple exponential amplitude taper and progressive phase taper is used to vary the beam tilt of a typical 24 layer broadcast antenna.

Even though signal levels can be increased 5 to 10 dB in a limited region close to the immediate coverage area, losses of more than 10 dB are observed after reaching a few miles from the antenna. Since the constant phase taper technique used to increase the beam tilt allows the gain of the antenna to remain relatively constant (within .3dB in the example), this loss in signal strength in the far region is purely a function of the narrow beam width and lack of signal on the upper side of the main beam. This will not be acceptable in the described next-generation network plan since a small amount of receivers would experience stronger signal and a large amount of “gap fillers” would be required to increase the signal strength levels outside of the immediate coverage area. The goal needs to be to increase the signal strength in the immediate coverage area with a minimum amount of loss in the far regions. 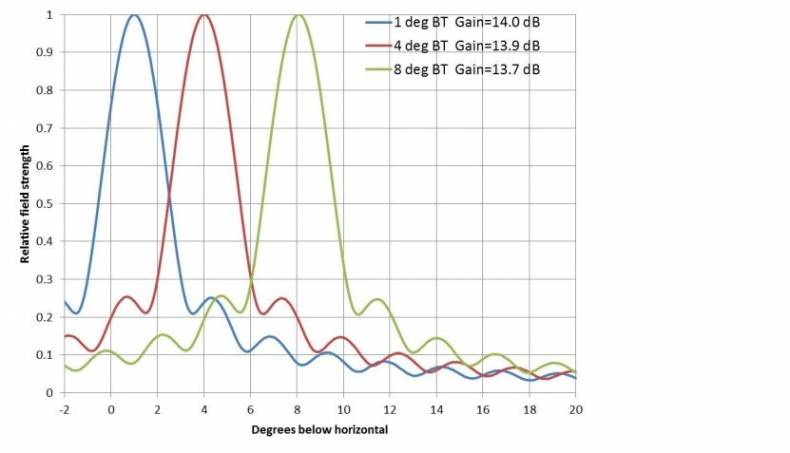 The null fill of an antenna is defined by the spacing between radiating elements and their illumination or relative amplitude and phase of each radiator in the elevation plane. Illuminations can be as simple as a single point where all the amplitudes and phases are the same for each radiator to very complicated where each radiator has a unique characteristic. See Figure4.

One must be able to change the illumination to design an antenna with variable null fill. For television broadcast antennas, the method must be simple due to their height and inaccessibility on large towers with expensive high power feed systems.

It can be shown mathematically that introducing an out-of-phase excitation approximately 5/8’s of the way from the bottom of an array, consisting of an illumination with a constant amplitude and linear phase taper, provides null fill in the first three nulls below the main beam. If the phase excitation at this point is 180 degrees, the starting beam tilt is unaffected, thus meeting the goal of close-in signal strength improvement with minimum loss in the far regions. With this in mind, illuminations have been developed by Dielectric which allow for very high null fills to be obtained through a simple illumination adjustment. 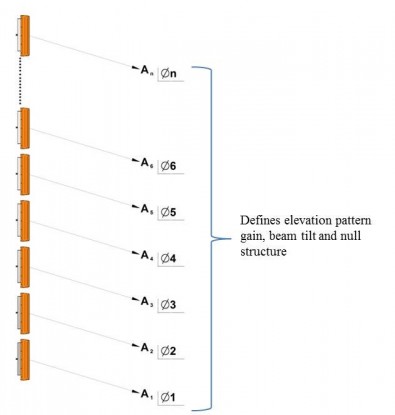 Figure 4. Illumination is the relative amplitude and phase of each radiator which defines the characteristics of the elevation pattern. Click to enlarge.

As mentioned earlier, the future of broadcasting will most likely see more co-location and antenna sharing, which will drive antenna designs towards broadband panel configurations. Individual panels in a panel array are fed through a series of power dividers and feed lines which determine their relative amplitude and phase and thus defining the illumination.

To better understand the average null fill increase vs. the gain reduction, the field strength vs. distance from the antenna can be plotted. For comparison purposes a height above average terrain of 1000’ using the FCC 50, 90 curves for UHF are used to compare the original design pattern with the effect of turning off one panel in conjunction with physically flipping one panel upside down to achieve a 180-degree phase difference. The ERPs based on the elevation gains of each pattern are 1000kW and 537kW respectively, assuming constant power to the antenna. The resulting expected field strength and field strength difference are shown in Figure 10. 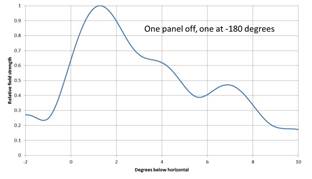 The reduced ERP and resulting loss of service at or near the horizon can be overcome several ways. It may be possible to plan on and increase transmitter power. As alluded to earlier, it may be possible to change the FEC for a resulting offset of lost gain to maintain the service area with corresponding reduction in useful data bandwidth. In the context of a next-generation system, the ability to overlay SFN or on-channel gap filling repeaters may provide the desired service area signal levels.

In anticipation of this new broadcast technology and the launch of new services, the ability to easily tailor the antennas signal strength to take full advantage of PLP’s should be considered if purchasing an antenna now. To accomplish this, the use of predetermined illuminations with broadband antennas that are modifiable in the field can provide the flexibility to customize the null structure at a future date.

The next article in this series provide deeper insight into some of the emerging technologies that can be applied for futureproofing antenna designs for the ATSC 3.0 standard. 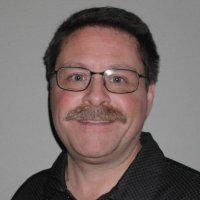