Real-time closed captioning gives viewers who need it instantaneous access to live news, sports and entertainment broadcasts. For viewers to see captions within two to three seconds of the words being spoken on air, the process has historically relied on operators trained to write at speeds of over 225 words per minute. Since it was originally developed in 1982 however, the Federal Communications Commission (FCC) never directly addressed quality issues in captioning.

That changed on February 20, 2014, when the FCC unanimously approved the implementation of new standards for TV closed captioning, addressing accuracy, timing and completeness. The new FCC standards mean that all closed captioning must now adhere to the following:

So what do these new rules mean for broadcasters? In its simplest form, content providers must take greater care with the precision of captions. In the past, captioning was somewhat hit and miss, with accuracy being often less than perfect. When words are missed or spelled incorrectly in a caption, viewers reading the captioning can understand the story in a completely different way from viewers hearing the talent’s spoken presentation.

News programming has always been an area of particular issue for closed captioning. The live event nature of news broadcasts has caused problems with caption accuracy and led to many local communities airing uncaptioned news programming. In addition to implementing quality control regulations, the FCC also adopted measures to ensure that people who are hearing impaired will have greater access to local news broadcasts. These measures include requiring broadcasters to pre-script more of their news programming, including sports, weather, and many late-breaking stories.

While these rules go a long way toward improving closed captioning for news broadcasts, the potential for a high level of human error remains. With software such as Autoscript’s WinPlus Newsroom Prompting system however, broadcasters can eliminate a dangerous step. As the teleprompter scrolls for the talent, the script content is simultaneously sent as caption data to a generator that outputs the captioning, eliminating human transcription. So providing the talent reads what is on the prompter, the captioned output will be exactly the same as the live broadcast.

That still leaves the big issue of how to accurately display the spoken word of a field reporter. If they are not using a teleprompter, they won’t be sticking to a script and will ad lib. Live caption operators are then needed to generate caption data in real-time. While these are talented individuals, this is where accuracy traditionally begins to drift.

The obvious solution is for the field reporter to have the same script as the in-studio talent, and this can be done using a teleprompter system with operator on location and a network connection back to the newsroom. While this might sound easy, these facilities often aren’t accessible for breaking news stories, especially in confined spaces, war zones or hurricane alleys. 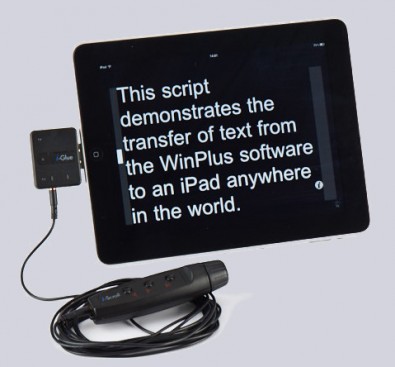 With the Autoscript WinPlus remote, a field reporter can view the same script as the studio team, no matter where the reporter is located.

There are technological advancements that can help solve this problem for broadcasters. Automatic script to device functionality is one way, powered by the accessibility of tablets in the field. With that in mind, Autoscript developed a unique solution which automatically enables a script from a studio/newsroom to be sent to an FTP site then downloaded to an iPad. WinPlus Remote means there is no need for additional equipment, hardware or operators, but the field reporter can still have the same script as the studio team, no matter where in the world they may find themselves. Even with last minute changes, the script scrolling on location can be the same as the one running on the in-studio teleprompter, and that exact script is output directly to the closed caption generator.

With the industry focused on bringing quality captions to the screen, for viewers with hearing disabilities and expanded uses such as public display screens, Autoscript has combined its experience and focus on innovation to develop solutions that help meet the new FCC requirements and assure the viewer that the captioned text they are reading is the same as what is being spoken on air. Broadcasters face many ongoing challenges, and now there are new regulations to meet, but the technology is here to help make closed captioning more accurate for all.

(Robin Brown has been with Autoscript for more than 15 years.