​In Part 2 of this series on Compression Technology we learned how Motion Vectors are generated when motion estimation is employed as the first step of creating P-frames and B-frames. In Part 3 we’ll learn how these motion vectors are used to generate Predicted Frames.

Dependencies among I-, P-, and B-Frames (Apple).

Video frames that will become P- and B-frames are partitioned into macroblocks in the same way as is done for an I-frame. Starting with the first macroblock in the Present Image (current video frame) a search is made to determine where it’s content can be found in the Adjacent Image (next video frame). When the contents of a macroblock have not moved, the macroblock’s motion vector is set to zero. 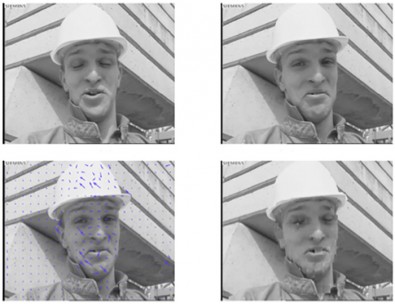 Ideally, these vectors would move pixels exactly to their new locations. However, as shown, the Predicted Frame has errors. To eliminate motion estimation errors, a Difference Frame is created. 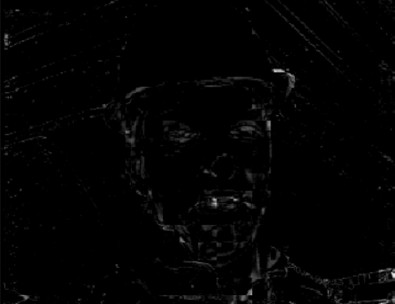 As a stream is uncompressed, an I-frame is re-created by reversing its lossless compression and then performing an Inverse DCT. This yields a Present Image that is output as a video picture. (A Present Image can be obtained from a previous I- or P-frame.) When a P-frame is encountered in a long-GOP stream, its motion estimation block is uncompressed. These vectors are applied to the Present Image to create a Predicted Frame.

This process is repeated for the remaining frames in each GOP. When the next I-frame is encountered, the process is repeated. Although P- and B-frames are more efficient – require less stored data – than are I-frames, because of the use of Difference Frames they have the same visual quality.

Very Cogent. The thing that everybody forgets is that the difference frame can require the same number of bits as an I frame thus causing unpredictable data rates. Could you explain which data is thrown away when the maximum bit rate is exceeded? I believe open GOP structures allow for arbitrary I frames which can be inserted when the difference frame exceeds a certain threshold, but still certain content (fast pans at high frame rates etc.) is going to cause problems. This certainly makes it interesting when calculating bandwidth and storage for media applications.

You are correct – encoders do have ways to handle scene changes, edit cuts, and rapid motion. Worst case, the encoder drops encoded data when necessary to keep the recorded data-rate within bounds. We see this as macroblocking.

When not stressed, an I-frame data peak is smoothed by the P- and B-frames that occur before the next I-frame. However, when I-frames occur too frequently, the stream data-rate can become too great. One way to prevent this, as described in a Sarnoff Labs patent on a broadcast (real-time) MPEG-2 splicer, is to adjust the levels between the from-stream and to-stream such that the resulting spliced transport stream will not suffer an overflow. Therefore, the goal is to decode and encode only GOPs that lie on a splice boundary. The re-encode is controlled by a feedback loop that adjusts encoder compression based upon the current data-rate.

To prevent overload, a smart GOP splicing system, after decoding all frames in a GOP, re-encodes them using higher compression. Increased compression decreases the amount of data while causing a loss of video quality. Thankfully, the lowest quality encoding occurs when a GOP has been trimmed the most and is, therefore, of very short duration.

The Sarnoff patent addresses this issue by this statement, “With respect to rate control (which ultimately determines overall picture quality of the recoded portion of the transition clip), due to masking in the human visual system, a small degradation in video quality at a scene change is often imperceptible to a viewer.”