Television remote controls can be simple or complex, but users value ease-of-operation.

Watching television — like we did a decade ago — is no longer a linear experience. In fact, it’s no longer even about watching television in the strictest sense. Consumers are, however, in the driving seat with myriad choices when it comes to what they want to watch — series, movies, sport, live broadcasts, and on demand content. They have almost unlimited choice in how they want to watch this content, whether that’s in the living room on the humble television set, streamed via their games console, or through an app on their smartphone, tablet or laptop. And sometimes they even use a combination of devices, like watching a show on television but participating in online discussions via Twitter on their smartphones or tablets.

The market is constantly evolving with the emergence of new players, particularly in the OTT space, and changing business models of existing players — just consider the announcement of the 2016 launch of a streaming service in the US by the BBC. And if industry analysts are to be believed, this is only going to grow. In fact, according to Infonetics Research, the global set-top box market is forecast to be worth over $19 billion by 2018.

So while consumers currently have more choice than ever before in terms of both content and devices, has viewing behaviour changed that dramatically? The short answer is, yes it has.

Regardless of how content is received by the viewer, via terrestrial, satellite, cable or internet streaming, the fact remains that providers of this content are looking to find new ways to not only monetize their offerings, but also raise the levels of interaction. Generally, viewers don’t worry about where their favourite programmes are coming from, only that they are able to watch them where, when and how they would like to. 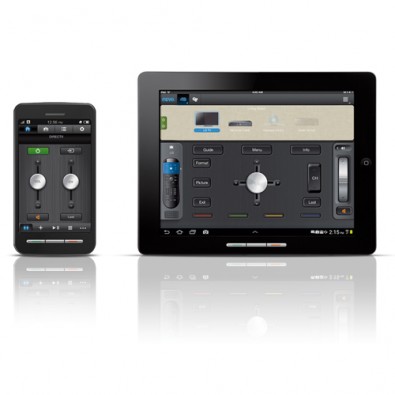 The Nevo is a universal remote app to control home entertainment equipment from a tablet or smartphone. The device can control TVs, Set-Top Boxes, audio devices, DVD players and streaming media boxes from hundreds of manufacturers.

But with so such choice, how do content providers — from OTT operators to so-called traditional broadcasters — ensure that they are meeting the needs of their customers and properly monetising the content at the same time? Ultimately it comes down to user experience, the way in which users access the content, find what they’re looking for and then consume it.

In the living room, for example, the driving force behind this user experience is undoubtedly the remote control. In recent research conducted by Trendbox DB on behalf of Universal Electronics, it was found that of viewers in the UK, Germany and France, there was an average of 3.3 remote controls per household. This is in no way surprising considering that 75% of respondents also had other devices (like set-top boxes, DVD players, games consoles and computers) connected to their main televisions.

Interestingly, the volume control buttons are those most used on the remote, and almost a third of all consumers admitted they only used a few buttons because they didn’t understand what the rest actually did.

The confusion around remote controls doesn’t stop there. One of the main user challenges is the confusion around switching source, or navigating between TV, set-top box, games console and other components like a DVD player or amplifier. In fact, 34% of respondents said that they struggled to get the right picture onto the screen. This inability to properly access content can have detrimental consequences for manufacturers in the financial sense. 10% of these respondents said they contacted support to help them change the source. The number may not seem high, but when you consider that each call to the contact centre could last several minutes, that’s time agents could be spending on other income-generating activities or answering other customer queries.

Many of today's electronics devices offer search and even voice control. Such features enable viewers to control more of their entertainment equipment with a single unit.

It’s not all doom and gloom. The remote control can be used to simplify the user experience. If it is easy to use (and can be used to control other devices) then content providers can take steps towards making sure their content appears where it should.

A key part of the simplification process relates to navigation. For set-top box operators and OTT content especially, searchability is crucial. A number of methods can be used to find content, depending on the type of remote control. This includes voice, hand movement and gesture control, using keys and track pads, or even apps that can turn your smartphone into remote controls.

But getting to the point where users can search for and interact with the content they want begins when the remote is actually set up. This process is particularly important when it relates to a universal remote that controls everything including the TV, DVD player, set-top box and console. While many users might get installers to set up the remote control during the initial installation process, what happens when components are added to the stack, or if remotes get broken or lost?

Consumers, regardless of what they’re controlling, want a remote that is easy to use. This is reflected in the research with 80% of respondents agreeing. However, this isn’t always the case as the more choices viewers have, the more complex their watching journey becomes. But more choice doesn’t necessarily need to mean more complexity. In fact, with content providers and manufacturers working together to perfect the user experience, all goals can be met; whether that’s improving the user experience, monetising content or creating the perfect remote.