Many elements of audio production have gotten simpler over the years. Even amateurs can learn to do basic multitrack recording at home with a brief tutorial. However, one area still not for the faint of heart is speaker installation and calibration. It requires training and practice, or professional set-up to do it right.

Whether it’s a small project studio, a broadcast control room, a motion picture theater, a small PA system for voice amplification or a live performance music sound system, each type of installation is different and requires specific skills. Some installations are easier than others, but all demand special training and practice for professional use.

John Meyer, a pioneer in professional sound and founder of Meyer Sound Laboratories with his wife, Helen, found that speaker education was essential to his company’s success when it was founded in Berkeley, California in 1979. Since then, a big part of Meyer Sound is educating customers on the installation and use of the gear the company manufactures.

Meyer began his professional life in 1967 working at a high fidelity store doing custom installations. It was the early days of concert systems, and Meyer did a custom sound installation for Steve Miller and his band when they appeared at the Monterey Pop Festival that same year.

John Meyer, founded Meyer Sound Laboratories with his wife Helen. Together they have emphasized the importance of educating customers on the installation and use of the audio equipment they manufacture.

The seminars are intensive and focus on cutting-edge techniques plus electronic and acoustical fundamentals. They operate from the perspective that high technology is always built from basic concepts.

Steve Bush, a senior Meyer technical support and seminar instructor, debunked one widely held notion right off the bat. “We don’t make anything where a button can be pushed and signal processing applied that will ‘auto-magically’ optimize the speaker system for the room,” he said. “There are a couple of companies who have attempted this and it’s an interesting kind of idea, but we’re not there yet as an industry.”

Steve Bush is a senior Meyer technical support and seminar instructor, notes that no amount of technology can "auto-magically" optimize a room's speaker system.

Audio companies, like Denon, sell high-end consumer receivers with calibration systems, he noted. They set rough level adjustments and can choose from a choice of EQ settings. But they won’t do things like put in a third octave, a two dB cut at 250 hertz, or other fine tuning.

“The EQ settings closest to the target curve are the ones those systems select,” he said. “It’s not that precise, but for home listening situations for the average Joe, it gets way closer than he’s ever been. For a few hundred dollars, you can have a decent sounding system with absolutely no calibration at all. It will not sound bad. With a little bit of delay and a little bit of level adjustment — never mind the EQ adjustment — a system can sound pretty good.”

For professional level sound systems, however, such automation is not even close, Bush said. “Will there be an automatic sound system in the next few years? In my estimation, I really don’t think so. It’s very complex and it has to be made simple. To do that either takes a lot of equipment or a lot of processing power. There has to be enough capital in the industry to go through the development. Nobody’s quite there yet. We need more people who need and can afford these things before such a system can be built.”

Meyer Sound makes several application-specific professional speaker systems. There may be models designed for control rooms, cinema, surround systems, concert systems and PA systems for reverberant spaces. Each is designed to solve specific problems — which have to be recognized by the installer.

“We have a department inside Meyer Sound called Design Services,” Bush said. “They take incoming requests for design of sound systems and they get a list of requirements usually from a consultant, a design build firm, a dealer or a distributor. They usually have information about the room’s acoustics, the needed frequency response, how low and high the system should be and the sound level needed. Those are the normal parameters that will get us started in selecting the appropriate products.”

The room or venue where a speaker system is going to be used has to be factored into the decision of what gear to choose. What is the structure of the room and how much weight can it support? What’s the size of the space? How reverberant is it? No matter the room’s size — whether a major concert hall or a small control room — there are issues that need to be taken into account. 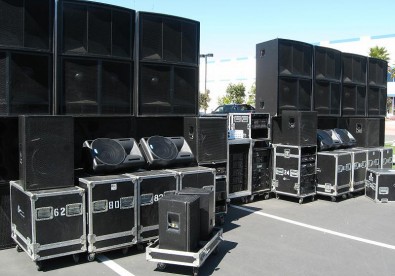 When it comes to concerts, large and powerful might describe the required sound systems. Shown are example Meyer concert speakers.

Special circumstances must be considered. One example is Dolby Atmos, Dolby’s latest surround sound technology which was improved to add immersion to home theaters. Atmos employs in-ceiling speakers or special Atmos enabled upward-firing speakers that reflect sound off the ceiling. An Atmos installation has to include consideration of the room’s ceiling structure.

As speaker configurations vary, specialized training is needed. Take a basic voice amplification system for speeches in hotel ballrooms. In this case, a technician can be trained in a single day on one speaker type and on how to use processing equipment for level, EQ and delay settings. Then, with additional practice, the operator can become skilled in such installations.

“It’s a little bit like playing the guitar,” Bush said. “You can have somebody play two or three chords, but they won’t play them very quickly or very well unless they practice. It’s the same with speakers — with time and practice the user gains experience.”

As far as design, sound systems boil down to some pretty simple things, Bush said. “You have to pick the right loudspeaker and that means enough level, enough bandwidth and directivity. Most of the time we are working inside of a room. What the audience ends up hearing is the speaker and the reflections from the room. The idea is you want the most direct sound for each listener.”

To achieve the correct results, sound technicians must pull from their skill set the proper ways to project speakers for the best coverage. A more complex scenario is major concert sound, where the objective is to have the sound essentially be the same for each listener at every venue. That’s usually the job of the system technician on the tour.

“The system tech arranges speakers in a given venue so that nothing is too loud or too quiet. He or she must make sure the audience and the sound mixer experience the same sound,” Bush said. “There is, of course, no perfect sound system where every seat in a venue can sound exactly the same.

“I could make the venue sound great in every seat, but the speakers would be so close to the audience members that nobody would be able to see the stage. There are basic compromises working with speakers relative to each other. There’s a bag of tricks in adjusting the speakers, including their levels, positions and mounting.”

Cinema speakers present a different situation. Sound systems in motion picture theaters are designed to precisely reproduce the decisions made by the director and sound technicians during the mixing session. To ensure conformity, these systems follow SMPTE 202M, a standard for motion picture audio. Installers are trained to follow this standard, which is precise.

“SMPTE is now working on an updated version of 202M because now we can build sound systems with a lot less distortion than in the 1970s and 80s,” Bush said. “They are attempting to write a distortion specs which was never part of the original 202M.”

As precise as cinema sound is due to the standard, broadcast surround is the opposite. Outside of the recent loudness spec, there are no specifications for broadcast 5.1 surround sound.

“What broadcast engineers do is grab some speakers, put a microphone in the sweet spot of the room and time the surround speakers to arrive at the mix location at the same time the left and right do,” Bush said. “They will set the frequency response by using EQ to be very flat. They are not going to change it by adding more high end or low end.”

The lack of broadcast surround standards extends to the 5.1 monitoring in mobile trucks used for sports broadcasts.

Students at a Meyer Nashville training seminar focus on the directivity of low frequency sounds.

“People have bought our small surround speakers for mix trucks. Again, it’s a compromise. Some of the systems sound pretty good, but there is a point where it’s going to be good enough. Occasionally someone new to mixing surround is not sitting in the middle of the field of the surround speakers and they get little carried away and they turn up the low-end a bit more than it should be. At home, you’ll be flipping through channels on a Sunday and you’ll hear the difference. Because there are no standards, you will get variations.”

Meyer Sound teaches a wide range of speaker calibration classes for all sorts of applications. For more information, visit: http://www.meyersound.com/events/seminars/.