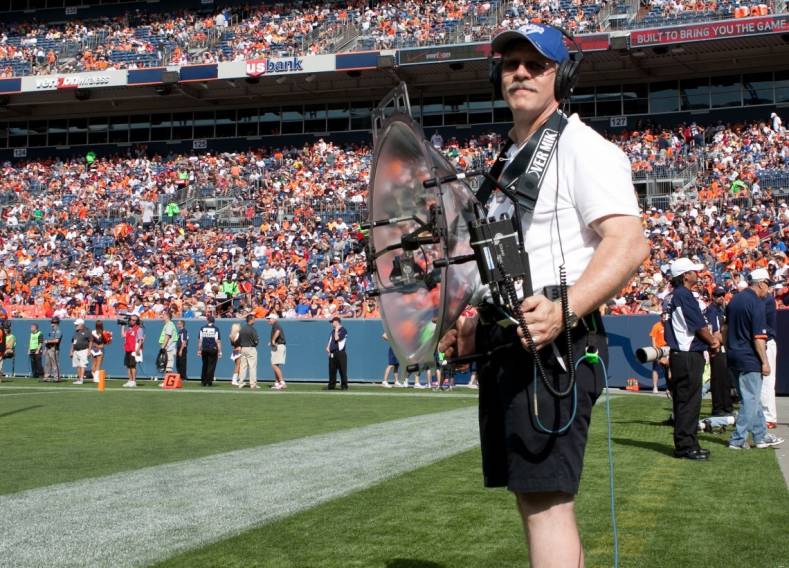 Paul Terpstra worked the sidelines with his large parabolic mic. He discovered that sometimes, smaller is better.

In 2011, the Fox network went on a search for a better parabolic microphone to use in its sports programming. When the company could not fine one, it asked an engineering contractor if he could design and build a better mic.

Thus began a journey that has led to a new generation of parabolic technology for small format video production.

The contractor that Fox approached was Patrick Santini, a specialist in building stages for sports television and other live events. Santini had worked previously with Paul Terpstra, a research and development engineer. Together, they tackled the issue of building a better and safer parabolic microphone. 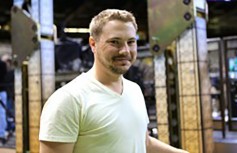 Fox had become dissatisfied with Big Ears parabolic mics from Crystal Partners, a company that has since gone out of business. In the fall of 2011, the network tested a prototype 26-inch model from Santini and Terpstra. The audio was so good that Fox ordered 50 units for the 2012 football season. Klover Products, their jointly held company, was suddenly in business.

In the summer of 2012, Fox used a 26-inch parabolic mic at the Major League Baseball All-Star game in Kansas City. A Big Ears model was replaced with the Klover unit behind home plate.

Fox’s audio technician heard a new sound in the mic and at first couldn’t figure out where it was coming from. It turned out to be a water fall in the distant outfield of the Kansas City ball park. No other parabolic microphone had ever picked up sound at such a long distance before.

Realizing the 26-inch model was too sensitive for baseball, Klover built a smaller 16-inch parabolic mic model. It has become popular. The New York Mets have installed eight of the 16-inch models in its new stadium, and several contractors for the new Atlanta Braves stadium have included Klover’s 16-inch parabolic mics in their bids.

Then, at NAB 2013, a man approached Terpstra with a question. How small could Klover build a parabolic microphone? The man told Terpstra he worked in reality television and interview subjects often changed their behavior when a shotgun mic mounted on a boom was visible. The man wanted to be able to mic the subject indiscreetly from a distance and avoid the view of the microphone.

Thus began a discussion of parabolic size. Previously, small parabolic mics always lacked low end. “Many sounded like audio in tin cans,” Terpstra said. “So I went to work, experimenting with a variety of shapes, sizes and material thicknesses. I can’t claim any genius on my part, but we finally created a nine-inch parabolic microphone that defeats the common misconception about a lack of low end.”

The Klover Mik 09 nine-inch model, designed to mount on portable video and DSLR cameras, has been out less than a year and is selling well. It is now being used not only in reality television production, but in a wide range of applications from wedding videography to picking up the sound of coaches who don’t like to wear microphones during sporting events.

The small size and transparency of the MiK 09 makes it almost disappear from view. The mic is 10 by nine by three inches, with an eight-inch parabola size. It weighs about one pound and costs $450 without a microphone. A “dead cat” wind cover is $50 extra. The mic comes with a dish assembly, yoke, mounting block with a ¼-20 hole for a hot shoe and a rod for securing the device in shotgun mic clamps.

Klover MiK 09 parabolic microphone. Users can select their own microphone as the unit works well with a variety of models.

“I try to convince people that the general folklore about parabolics is incorrect,” Terpstra said. “You can make a small parabolic mic that sounds great. I think most of the rules of thumb come from the parabolic shape of satellite dishes. People think about how electromagnetic waves work with a parabolic dish, but we are dealing with sound waves here. Sound pressure waves are a totally different animal and that’s where the misconception is rooted.”

Klover’s MiK 09 nine-inch parabolic mic allows owners to use omnidirectional lavalier mics they already own. The mic’s performance is comparable to high-end shotgun microphones, and because the lav is located within the parabolic dish it tends to be more wind resistant.

Klover doesn’t recommend specific microphones for the device. “All audio people have their favorites, so we don’t recommend particular models or brands,” said Terpstra. “We just suggest that people use a lav that has as flat a frequency curve as possible. A lot of mics have a bright spot — a little mountain on the high-end of the frequency curve. This amplifies the normal tendency of a parabolic to pick up the high frequencies. The flatter the curve, the better the frequency out of the parabolic will be.”

It is common for parabolic mics to have two handles located on opposite sides of the dish with no support between them. As a result any movement of the handles causes the plastic dish to generate vibrations and unwanted noise that is picked up by the mic.

All connections to the Klover MiK models incorporate vibration isolation components to eliminate these unwanted noises. In addition the handles are designed to be rigid so the operator cannot distort the dish.

Rapid motion of the dish can cause the pickup mic itself to exert forces on the dish’s rim and create noise. Klover incorporated vibration isolation components into the support for the MiK’s pickup mic so this noise is also eliminated.

New applications for the Mik 09 are being found almost daily. For example, at Willis Tower (formerly the Sears Tower) in Chicago, a popular tourist attraction, the Mik 09 is used for tourist videos in a glass observation booth 103 floors above the city.The mic picks up the speech of individual tourists above the loud crowd noise and highly reflective bullet-proof glass in the booth.

HBO approached Klover about using its parabolic microphone on boxing telecasts. A unique problem in boxing is that fans along the front rows of matches often use profanity and the mic must not pick up those words — only the action of the matches. That can be a problem for a mic that has a long reach for sounds in front of it.

Terpstra said a trick is to place the mic higher up and aim down, so that the background is the floor of the boxing ring — not the crowd. He is developing accessories that will also be able to narrow the field of use even further for such special events.