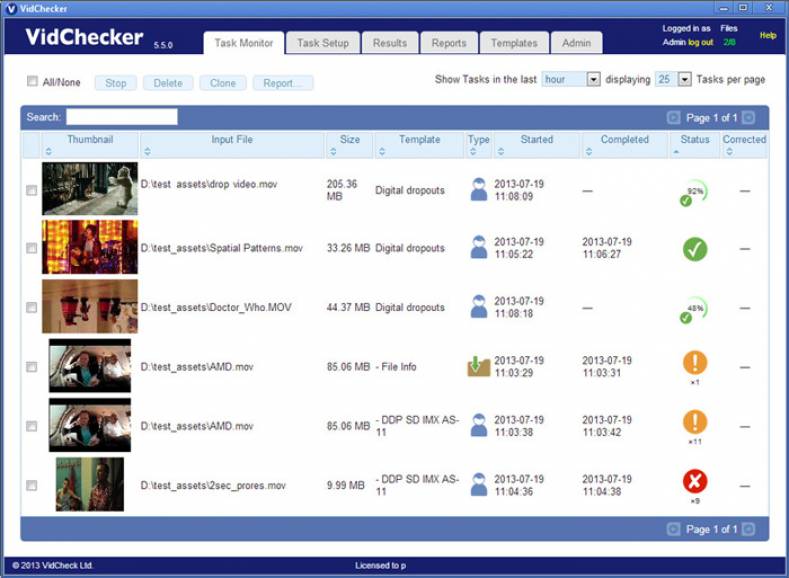 Vidchecker both describes the problem and automatically corrects it too, which makes it different from other QC products.

Controlling content quality for delivery in an increasingly diverse array of formats to multiple platforms is time-consuming and costly, particularly in the rush to prepare and exchange file-based media between post production, distribution and broadcast facilities. There are now ways to automate that time-consuming process, but the question broadcasters and facilities houses should ask themselves when they are considering an investment in auto-QC technology is, “Does this auto-QC software just tell me where the problems, are or will it tell me where they are and fix them for me”?

Some QC systems automatically test content for unacceptable flaws, but still require considerable amounts of manual intervention to repair those flaws, and yet another pass to confirm that they have indeed been fixed. Unfortunately, what compounds the problem is that manual repairs can often introduce new errors, which means that the “auto” QC process has to be repeated, sometimes over and over. There’s precious little that’s “automatic” about that at all.

And therein lay the risk when considering an auto-QC product for an otherwise healthy workflow. The wrong decision can actually slow the workflow down.

This is, in part, because expecting video and audio editors to be fully conversant with the multitude of file-based media formats and their delivery specifications is a big ask. An editor should be focussed on creating content rather than getting bogged down in the minutiae of formats and standards. One major online content provider has a complex list of broadcast/distribution delivery specifications that includes more than 20 different combinations of “acceptable” video/audio HD formats. So where do you start and, more importantly, how do you know when you’ve arrived at “acceptable”?

The good news is that the AS-11 UK DPP delivery standard is an excellent example of a well-considered signpost that makes those definitions much easier to grasp. That’s why we’ve not only supported this specification but developed technology to take the pain out of correction. If there are issues with a file, Vidchecker not only describes the problem, it automatically corrects it, too, which is what makes it different from any other QC product on the market.

The AS 11 UK DPP delivery standard has been very positive for the UK market and I see no reason why similar partnerships could not be established in other parts of the world. All it takes is the dedication of knowledgeable resources coupled with political will and industry collaboration. I am sure we’ll hear discussions about like-minded initiatives taking shape while we’re at NAB 2015.

as part of the edit process, immediately before the media is rendered. This approach means that the user can be confident that the rendered media will fully comply with the specified requirements before it leaves the Adobe environment.

We think that’s a great way to control content quality for delivery.

VidCheck are at NAB Booth SL5421

In the last article in this series, we looked at SDP files and the importance they play in identifying source and destination devices. In this article, we look at why we combine layer-2 switching and layer-3 routing, and why broadcasters…