The ATSC is working with new tech partners to bring new features and capability to the NextGen TV standard. Like digital ad insertion.

At the recent NAB Show New York, a new digital ad insertion feature for the ATSC 3.0 (NextGen TV) television transmission standard was announced by Pearl TV that takes advantage of two-way interactivity via an Internet connection in combination with an over-the-air signal. With it OTA viewers can seamlessly access streaming content.

As the availability of a NextGen TV signal has now reached 55% of U.S. households (with a goal of 75% penetration by the end of 2023), broadcasters are clamoring for new ways to generate revenue in a highly competitive world. Server-side Ad insertion (also known as dynamic ad insertion and used by the cable industry for years) is now possible thanks to a new app called RUN3TV that addresses the A/344 Interactive Broadcast Standard as a part of the NextGen TV specification. With it, broadcasters can stitch targeted advertising on a live and linear basis into OTA broadcasts. This allows stations delivering in local news, sports, and entertainment to create an experience for viewers that is as seamless as it is on linear broadcasts, albeit with individualized ads based on user data.

For the past year RUN3TV has tested the platform to ensure the web platform is stable and uniform across manufacturers, operating system versions, and connected TV models. The web-based architecture enables stations to develop, innovate, and differentiate at the application services layer – all while utilizing existing web capabilities.

With the combined NextGen TV and the RUN3TV framework, broadcasters can leverage a connected TV device graph of 100 million households, to deliver local-at-scale precision.

“Connected TVs continue to be a driving force behind turning the TV screen into a full-funnel marketing tool, bringing together the premium environment of television with all the tools digital has and more," said Adam Helfgott CEO of Madhive, which supports the SSAI protocol and began working with local broadcaster TEGNA in 2017 on streamlining campaign planning, buying, and measurement to give broadcast sales better returns. Through its self-service ad serving platform, advertisers can customize and automate the buying process into a single operating system that ad and operations teams can use to increase revenue.

"Now, with NextGen TV and the RUN3TV framework, we can bring these capabilities to over-the-air delivery, so that broadcasters can leverage our proprietary connected TV device graph of 100 million households, to deliver local-at-scale precision,” he added.

NextGen TV is based on internet protocol (IP) technology for interactivity, offering a combination of online and broadcast television.

Robert Folliard, senior vice president, government relations and distribution at Gray Television, stated that by next year there will be 10 million addressable over-the-air households in the U.S.

“There's a plethora of opportunities for broadcasters with RUN3TV—think of it as web pages over the air that are completely customizable. I am excited to see how broadcasters will lean in on this new capability, engage with the platform and harness a new revenue stream,” he said. 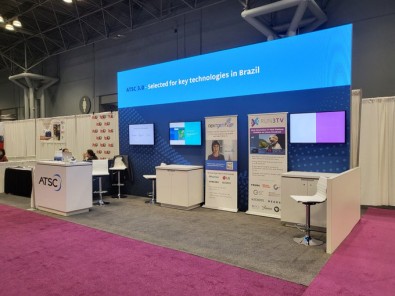 The ATSC was on hand at the 2022 NAB Show New York conference to provide updates on the emerging TV standard.

During the NAB Show New York conference, Pearl TV’s Schelle participated in a panel entitled, “NextGen TV, Streaming and the Future of Local Media,” where new types of interactive services like RUN3TV were discussed for viewers using the new transmission scheme.

Pearl TV also announced its FastTrack program to accelerate development and retail availability of low-cost 3.0 accessory receivers. The program, it said, will help advance availability of devices for consumers by guiding device makers through the NextGen TV logo and other conformance requirements, including security and regulatory compliance and testing, as well as promoting opportunities for distribution and marketing partnerships, Pearl TV said.

It was noted that over 90% of households have displays with HDMI inputs that are not outfitted with 3.0 receivers. The new program aims to support manufacturers wishing to make devices that support NextGen TV’s feature set, including enhanced video, audio and interactive features. The goal is to make it easier for CE companies to design, manufacture and sell upgrade accessories.