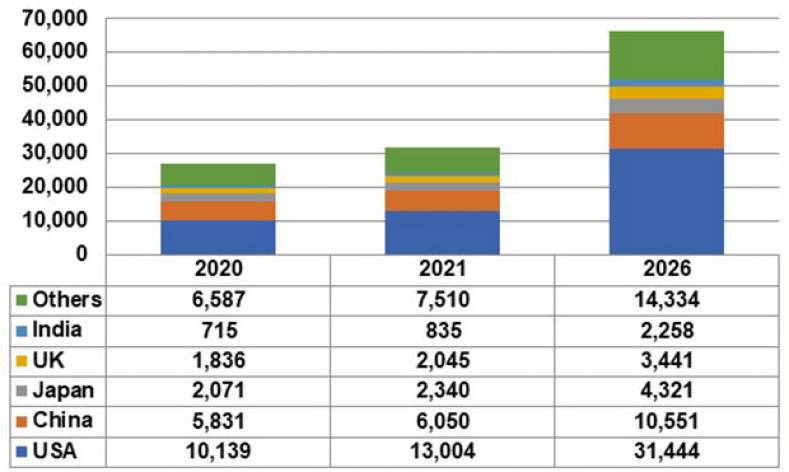 This equates to $39 billion additional revenues, of which the US is predicted to contribute $21 billion and China $5 billion. The US is currently spearheading AVoD growth and became the world’s biggest spender in this sector as the Covid-19 pandemic dragged China’s outlay down by 14% during 2020, despite that country being the only major economy to register economic growth over the year.

This reflects China already having a large legacy AVoD base with SVOD now growing faster there. By contrast, AVoD is making big strides in the US among slightly older less affluent consumers unwilling to replace bloated and expensive legacy pay TV packages with multiple SVoD subscriptions approaching the same aggregate cost. As a result, even the pandemic, with its squeeze on marketing budgets, has only dented the global increase in AVoD revenues, holding back growth to 9.2% over 2020.

As Digital TV Research pointed out, it is hardly surprising the US is leading the AVoD charge because it has by far the world’s most advanced advertising market, combined with the most developed OTT sector. These factors have conspired to entice some of the media giants to make major plays in SVoD.

Comcast has majored on AvoD to generate revenues for both its Peacock and Xumo streaming services, which are likely to be folded into a combined offering with some premium content, including originals, still paid for. ViacomCBS acquired Pluto TV to enter the AVoD realm, while Fox did the same with TubiTV, which are both gaining users rapidly. It is true that Disney Plus on the back of its huge catalogue and brand has stolen the headlines with its steep climb towards 100 million paid subscribers worldwide, reaching almost half the Netflix total in under a year, but the numbers for those AVoD services have also been very impressive beneath the radar screen.

Both Pluto TV and Tubi TV passed the 30 million active user mark in the US late in 2020, while Peacock TV claimed to have 42 million sign ups by April 2021. A recent report from Omdia indicated that nearly 200 million US consumers are now consuming content from some AVoD platform on a monthly basis.

This explosive US growth is starting to spill into Europe, with Pluto TV having launched services in France and Spain. This comes amid signals European consumers are increasingly receptive to ad supported streaming services, which will register with Netflix given its insistence so far on sticking solely with subscriptions. A report published by digital ad verification specialist Integral Ad Science (IAS), indicated that 83% of UK consumers were willing to watch ads for access to free streaming content, while 56% plan to start watching such services over the next 12 months. Significantly, this growing acceptance was being fuelled by a rise in contextual and targeted advertising, making ads more relevant. As a result, while 19% of consumers now normally watch ads all the way through when streaming, that rises to 54% when the context is deemed relevant to the content they are watching, according to that report. There is clearly some correlation between content and product or service preferences, and it may also be that consumers become more receptive to an ad that is related to what they are watching.

Furthermore, about 17% of consumers are more likely to remember ads or look up products and services mentioned when viewed while streaming video or watching connected TV. IAS attributed that to the more enhanced targeting and data insights that these platforms can provide, compared with traditional linear TV.

Ampere Analysis is another market intelligence firm to examine AvoD recently, agreeing that it is now on a similar rapid growth trajectory to SVoD. It may even be on a higher track than SVoD in the US, obscured temporarily by the phenomenal take off achieved by Disney Plus for its subscription-based packages.

AVoD has been big from the outset in many developing markets. In some of those countries SVoD is growing faster on the back of an expanding middle class willing to pay for premium content, as in China. There are less signs of that happening in India, the other huge AVoD market, which is still biggest in the world by number of subscribers, with over 500 million monthly AVoD users. In India AVoD is set for continued growth, at the same rate as SVoD but from a higher base there.