You can’t get the Sinclair (SBG) Broadcast App from an app store. ATSC 3.0 “Broadcast Apps” are different than the typical ‘broadcast’ apps from Apple, Google Cloud or Microsoft Corporation offer at their App Stores because it doesn’t come from the internet. An ATSC 3.0 signal containing a Broadcast App automatically loads or updates at the receiver every 3 seconds. Ideas, research and implementation like this make NextGen TV stand out from traditional, one-way TV.

Bouchard explained that when a viewer buys a new NextGen TV set, connects the antenna and turns it on for the first time, the TV automatically scans and recognizes all available 1.0 stations and 3.0 stations. If a 1.0 and 3.0 station are the same station, the TV will only show the 3.0 station. When tuned to an ATSC 3.0 signal, the TV looks for signaling that indicates broadcast app availability or not. Loading the app takes about 2 seconds. When loaded, the broadcast app shows an icon indicating it is ready and an invitation to start it. Pushing the right arrow key enables the app and brings up a menu on the left side of the screen. 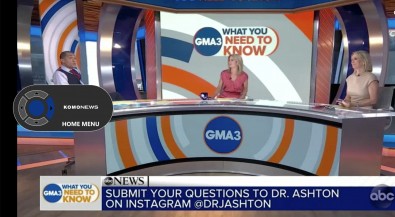 When loaded, the KOMO broadcast app shows an icon indicating it is ready and an invitation to start it. Pushing the right arrow key enables the app and brings up a menu on the left side of the screen.

The home menu presents choices for the viewer, for instance, the latest weather VOD from the local station, or the 7-day forecast. It also presents 25 different STIRR channels, audio channels from local radio stations, and it offers VODs for the top local, national and world news, sports, and entertainment stories.

Because the app is retransmitted every 3 seconds, it can automatically be upgraded as often as necessary with a new app or with added features within the app when available, including new channels. Temporary flash channels do not require an app update. Flash channel data follows the same pattern as a transmitted alert. The broadcast application reads this data being transmitted over the air and displays the flash channel option to the user.

SBG is testing alerts for the Broadcast App.

The Sinclair Broadcast App also supports ATSC 3.0 Advanced Alerting. With the Broadcast App, emergency alerts can provide multiple pages of content behind a typical alert crawl, with a "Show me more" button like on a website. It leads to more relevant integrated details such as live video, maps, and other special info choices. Viewers can set their Zip Code to filter alerts and opt in or out of five levels of alerts, from all to none.

Something new for ATSC 3.0 broadcasters is instant analytic feedback. The SBG Broadcast App provides SBG data of who is watching what on the App from where, starting the moment the Broadcast App is turned on. Adam Ware said STIRR is an on-ramp for Next Gen TV. He explained that some of the elements and analytics already developed and deployed in the STIRR OTT App are contained in the Sinclair Broadcast App.

STIRR was not designed to be a national service with affiliates, but rather to be a local service, with live local news, local weather, a station's local syndicated programming and other things that might not make it to an over-the-air TV channel. SBG has 84 STIRR City Channels, all direct to the viewer OTT TV stations anchored by local news. STIRR also allows pop-up channels for special events, live news conferences, or advertiser-owned 24/7 specialized channels more powerful than :30 and :60 OTA spots. STIRR is testing how much deeper viewers want to dig into local content.

Rob Weisbord compared building a NextGen TV station with diginets and multicast data networks to building basic cable channels with a local station connection and distributing with an easy-to-find and load app, equally suitable for home theaters and moving vehicles. He said the goal is to have a built-in DVR to transform how people view content. Adam Ware called broadcasting basic cable channels for free and bundling diginets and OTT a collective viewing experience. He said the focus is on the one-to-one customization of content that ATSC 3.0 allows by unlocking the power of a RF TV transmitters with hybrid capability. Unlike the internet, OTA signals don't buffer and can provide multiple streams of unlimited free and private data.

SBG is also working on building its national Broadcast Internet, Digital Data as a Service (DDaS) network as more SBG ATSC 3.0 stations go on the air. Simultaneous, OTA, one-to-many private data delivery for 3rd parties willing to pay for it is an exciting new business model beyond the scope of this story.