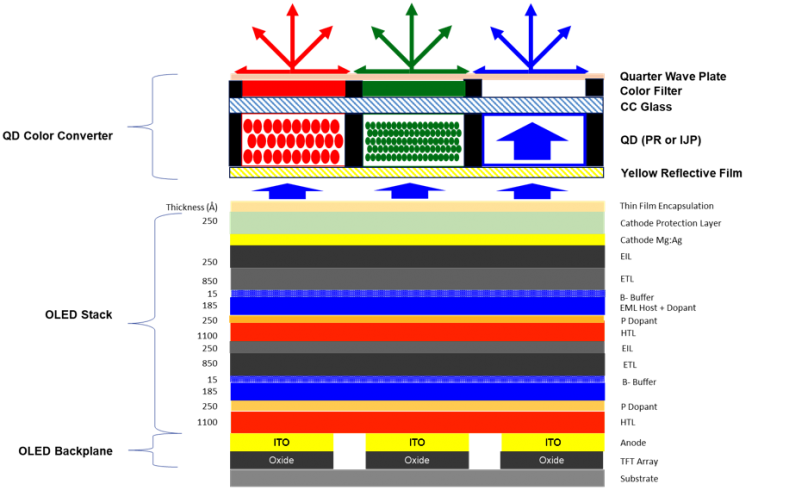 Yet more recently, as the emergence of high resolution 4K/8K, ultra-HD, High Dynamic Range and Wide Color Gamut (WCG) has coincided with debates between LED, OLED and Quantum Dot (QD) technologies on the display side, the relationship has become more dynamic. In particular, the ability to capture and transmit images in HDR and WCG has driven intense competition between major TV makers as they seek to optimize the underlying technologies to deliver the best experience possible.

This seems to have culminated in what can be seen as a major volte face by Samsung as it prepares at last to abandon its long-standing LED technology and migrate to the OLED approach favored by arch South Korean rival LG. But there is a twist in that Samsung will combine OLED with the QD approach the company has already adopted to enhance the contrast of its existing LED TVs.

The motivation for QD-OLED is then to achieve the visual benefits of OLED with its perfect blacks and self-illumination to avoid need for backlighting, but with lower production costs and greater brightness. This would enable Samsung to offer customers a lower cost entry point to OLED performance without some of the drawbacks.

Samsung’s impending wholesale switch to QD-OLED in about a year’s time early in 2022 is still just a rumor reported by Korea IT News, but the electronics giant had already confirmed it would start manufacturing QD-OLED TVs around that time. The only lingering doubt subject to confirmation is then over Samsung’s withdrawal from its QD-enhanced LED, known as QLED, driven by the demand to match rivals in full color range and contrast ratio, as well as wide viewing angle.

This dates back to 2012 when Samsung followed LG into launching a range of OLED TVs. But while LG then majored in OLED it did not work out so well for Samsung because costs of its version of the technology proved too high for its business model as a result partly of low yields. This led the company back to what had been its plan B, which was instead to enhance LCD TVs with QDs.

Quantum dots are nanoparticles between 2nm and 10nm in diameter, whose relevant property is the ability to emit visible light upon illumination with UV radiation, at a wavelength determined by size and shape primarily. In the case of LCD TVs this can be used to achieve high brightness while maintaining a full-spectrum of white.

The point here is that perfect white light, or “all-white” contains light of all wavelengths, while LED displays are limited to just some. So while contemporary LED backlights generate as much brightness as anyone needs, it is very difficult to combine that with the full-spectrum white.

QLED improves on this by combining red and green quantum dots with bright blue LEDs, maintaining brightness while gaining a full spectrum of white. But QLED still cannot match the almost perfect inky blackness of the best OLED displays and also suffers from poorer effective viewing angle range because of the need for backlighting.

OLED scores on those two fronts but its main drawback is the lack of brightness resulting from reliance on small pixels without backlighting. This is not a problem for people who enjoy watching TV with low ambient background lighting, but not everybody does.

QD-OLED kicks in by enhancing the brightness and avoiding need for filters to produce the colors, which reduces materials, complexity of manufacture and energy consumption, potentially lowering costs considerably. But there have been engineering development challenges pulling together the processes and achieving actual cost savings. Indications are now that Samsung has solved those challenges and reached a point where it may seriously attempt to gain, or regain, the technological high ground from its competitors.

That Korean report indicates that Samsung Display will have invested 3.1 trillion won ($12 billion) by 2025 in developing its new mass production line for QD-OLED TVs, coming on stream later in 2021, capable of making displays initially 65-inch TVs but then larger.

This has been driven in part by advances in high quality production and network capacity to deliver 4K resolutions alongside HDR and WCG. This has put the onus on TV makers to ensure their displays can deliver the potential experience to viewers, with competitive advantage to those that achieve the optimal combination of quality and manufacturing cost.