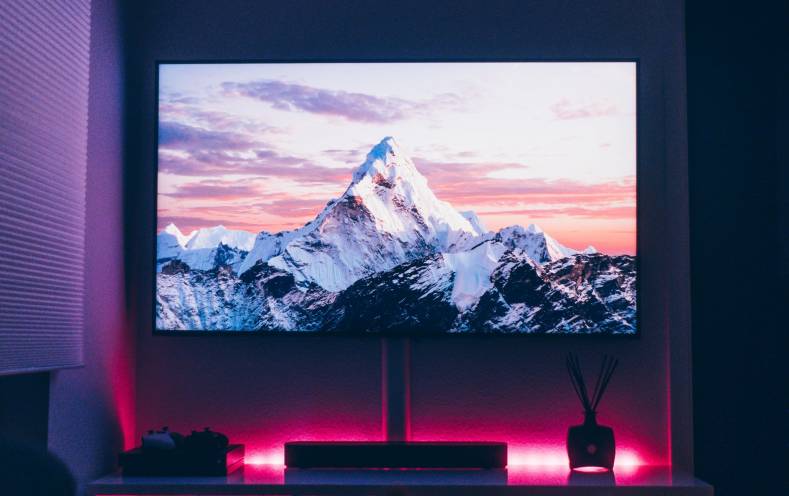 But targeting specific segments by exploiting audience data offers some hope of at least maximizing revenues from the surviving viewer base. At the same time, there is healthy growth in Advertising VoD which has led to some major media players, such as Comcast and AT&T, to come out with ad supported versions of their streaming platforms. Meanwhile, other major groups, notably CBSViacom and Fox in the USA, have been making hay with their completely AVoD platforms, respectively Pluto TV and Tubi TV.

Of the non-ad supported SVoD platforms Netflix stands out as the biggest gainer, with research just published by Ampere Analysis confirming it is now number two in Europe of all video and TV platforms by revenue, accounting for 6.1% of the total at around $8 billion. This is still only about half of the market leader Comcast with its 12% of revenues generated by Sky in the six European countries where it operates, the UK, Ireland, Germany, Austria, Switzerland and Italy.

Revenues counted are primarily subscriptions, advertising and public funding, but only the first applies to Netflix, while Comcast also derives income from the second. Third on the list on 5.7% having just been overtaken by Netflix is German public broadcaster ARD, which derives income from all three categories, followed by the BBC on 4.2% through mostly public funding but some overseas commercial revenue from content.

Traditional broadcasters have suffered from two covid-related aspects, loss of premium sports on TV and disruption of their ability to generate compelling original content. While these are temporary and indeed premium sports returned to screens in many countries later in 2020, the associated changes in viewing habits are more permanent, according to Ampere Analysis.

“The coronavirus pandemic has thrown the TV advertising market into decline, compounding and accelerating the woes of traditional and established brands,” said Tony Maroulis, principal analyst at Ampere Analysis. “And while Netflix’s pockets are getting deeper, local entities are struggling to compete. Over the next few years, Netflix alone is set to be better funded than many leading commercial broadcasters, and its scale means that it is able to produce quantities of high quality content that most of its local competitors cannot match. This global versus local imbalance will further accelerate the online viewing shift, which is now beginning to shift to older demographics as well as young”.

Netflix in turn will face intensifying competition from other major streaming platforms and is already feeling the heat from Disney, which has made huge inroads on the back of its diverse portfolio combining a lot of family oriented content through Disney Plus, adult material from Hulu and sports from ESPN. Disney Plus has enjoyed phenomenal growth soaring to almost 90 million global subscribers by the end of 2020 in the first year of its operation, almost half the total it took Netflix over a decade to amass. Disney has also made an impact on revenues across its three online platforms, so that its total direct to consumer revenues are now running at about $16 billion annually worldwide. That would probably have come in the top 5 of Ampere’s European list if they were all regarded as one. 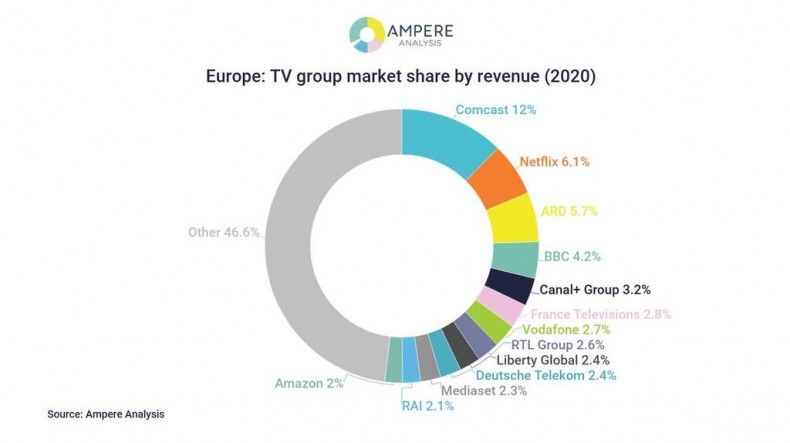 Major advances on the international front are also being made by Comcast’s NBCUniversal with Peacock and AT&T’s WarnerMedia with HBO Max, both combining subscription with ad supported offerings in those cases. Peacock had 26 million subscribers by the end of 2020, while HBO Max had 12.6 million.

Significant traction has also been gained in the USA by ViacomCBS with Pluto TV and Fox with Tubi TV on the AvoD front, while Amazon is also gaining traction with its ad supported IMDb TV launched in January 2019 and set to enter the UK in 2021. While Netflix has eschewed any ad supported version in the belief that its subscribers would be put off even by the existence of such an option, AvoD has grown in many developing markets such as India and also among less affluent consumers elsewhere, especially the US. That is why some of those major platforms have ad supported versions, targeting that seam of customers.

Meanwhile, vendors offering advertising technology are themselves making sales among both the newer breed of AVoD service providers and traditional distributors, including commercial broadcasters and pay TV operators. Among these is Synamedia, video technology company formerly owned by Cisco, which in turn had been partly acquired from the NDS business once owned by News Corporation.

This links back to Comcast and even Peacock, since Synamedia is backed not just by the Permira private equity group but also Sky, which is now part of Comcast. Synamedia claims that its Iris is the most comprehensive addressable advertising solution package enabling video service providers including broadcasters and pay TV companies, as well as online services, to reach specific viewer segments across all services, devices and screens. This can in particular unlock new revenue streams for additional providers, according to Synamedia. The claims draw on the fact that the platform incorporates experience and technology amassed developing the AdSmart technology used by Sky and Comcast. AdSmart has been enabling highly segmented addressable advertising via the traditional satellite TV platform in 2014 since its UK launch in 2014.