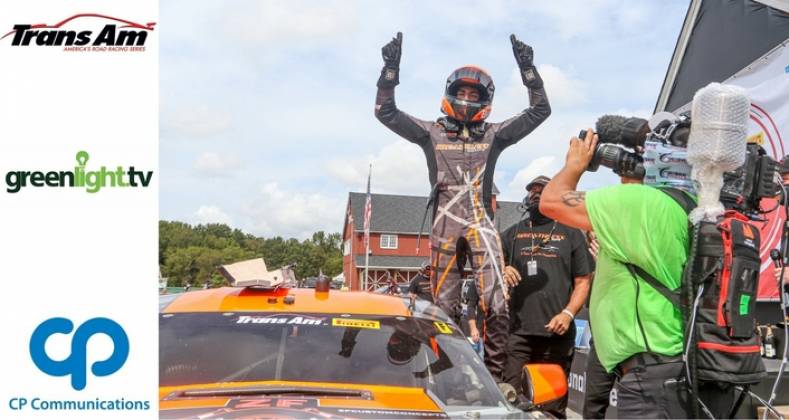 CP Communications, headquartered in St. Petersburg, Florida, has provided expertise and technology to Greenlight Television for its worldwide live stream of the Trans Am Series, a US-based muscle car racing championship.

CP Communications brought IP and bonded cellular gear to the production to help reduce costs, limit infrastructure and minimize the size of the crew.

Greenlight Television was in 2019 asked to develop a quality live stream of the Trans Am Series without the costs of using an OB truck. With the added challenges of the COVID-19 pandemic, Greenlight sought help from CP to prepare this streamlined, remote production.

The small crew on-site for the Trans Am Series used 12 MVP Agile Airlink encoders for six in-car systems, four fixed camera positions, a roaming pit and podium camera and a drone. All of the content was delivered to Greenlight’s remote production studio on the Isle of Man in the Irish Sea, with CP providing real-time production support from its distributed network operations centre. The live feed cut was sent to commentators at the track and then streamed to the Isle of Man. Voice and graphics were added to the final live stream, with a latency of 1.6 seconds.

“The traditional production approach for this kind of event would require a mobile production truck, an RF unit and a seemingly endless amount of fibre, technicians and production equipment onsite,” said Kurt Heitmann, CP Communications CEO. “Working with partners like Greenlight who embrace the REMI model substantially reduces costs.”