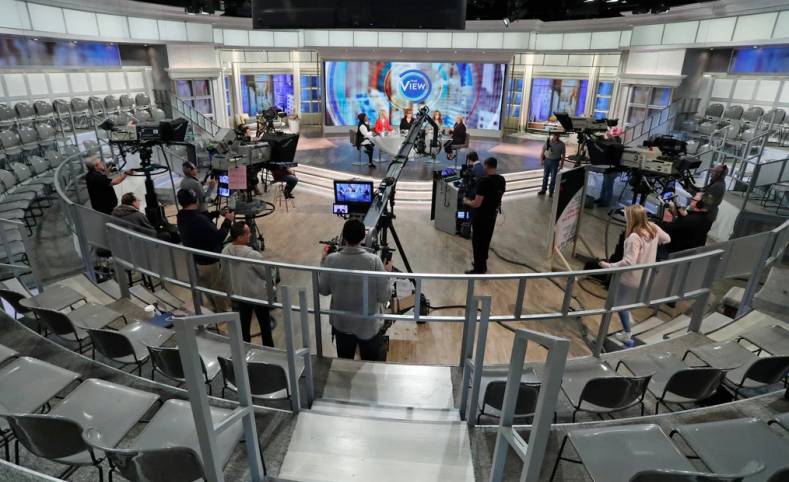 Popular TV Shows like ABC’s “The View” now shoot with no audiences and lots of safety procedures to adjust to.

As TV and movie production studios begin to slowly resume operations, they are doing so very carefully and with a number of government-mandated protocols for safe working in place. Some say these operational restrictions—limited crew, remote control when possible, non-essential personnel are not allowed—are significantly adding to the time it typically would take to complete a project. For starters, all shared equipment, microphones, and other TV production tools must be disinfected after each use.

While these precautions are necessary to get the more than a quarter of a million people in the arts who have filed for unemployment assistance in the US since the pandemic began back to work, it does not make it easy to get the work done. Huel Perkins, who co-anchors the evening broadcasts with an at-home Monica Gayle, for local Fox affiliate WJBK-TV, told The Detroit News newspaper that in normal times, he's used to there being anywhere from 225-250 people in the station’s Southfield, Michigan headquarters. Now there's sometimes only four, “and I'm the fourth,” he said.

Hollywood labor unions and studios have reached an agreement on coronavirus protocols that include mandatory testing schedules, personal protective equipment (PPE) guidelines, sick pay and quarantine pay. The agreement also creates a zone system regarding work areas on sets and production offices. Under the deal, actors and those they come in close contact with must be tested at least three times per week.

All employees will receive 10 days of coronavirus paid sick leave. The leave can be used for anyone who either tests positive, exhibits symptoms, isolates or self-quarantines, or when a member of their household tests positive.

In addition, many studios now require COVID-19 safety courses before arriving on set, locations must have enhanced ventilation, and shooting days are limited to 10 hours.

With production starting and stopping randomly, the feeling among production professionals, many who have been out of work for months, is “hurry up, but wait.”

Yet the precautions are working, allowing productions to resume operations. Filming of the new “Batman” movie was halted when its star (Robert Pattinson) tested positive for COVID-19 in May. Duncan Crabtree-Ireland, chief operating officer with the screen actors guild SAG-AFTRA, said that the situation was handled swiftly.

“The system is working,” Crabtree-Ireland said. “The testing was conducted, the test results came in and the people in charge made appropriate decisions.”

In August, three employees tested positive at Television City, in Los Angeles, they were separated and sent home to quarantine. The positive tests triggered built-in safety protocols, with the individuals sent home to seek medical care and contact tracing implemented.

Meanwhile, a staffer from “The Bold and the Beautiful” production company Bell-Phillip Television tested positive for COVID-19 in July. As a precaution, the studio moved up the show’s dark week for that month and added a second dark week. The daytime drama has since returned to production at Television City.

In Australia, production has resumed on Neighbors, a long-running TV soap opera. This has led to the cast social distancing on set and operators shooting special camera angles to make characters appear closer together. 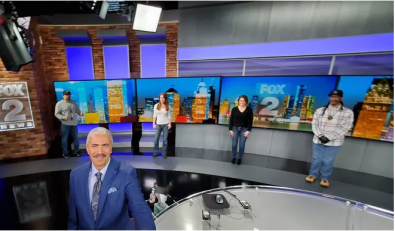 Like most news teams during the pandemic, the local Fox affiliate WJBK-TV is working with a reduced staff. Anchor Huel Perkins is in the foreground.

“We’re going to assume if someone does get sick we don’t need to shut the entire shoot,” he said, “we just close that group and carry on.”

Of note, the cost of the industry-wide shutdown in Australia is estimated to exceed $325 million, according to Screen Producers Australia, as work on more than 100 TV shows and films have ground to a halt. They are slowly coming back.

In the UK, the British Film Institute has launched targeted relief programs worth £4.6 million ($5.7m); including £2 million to help independent productions resume filming when measures are lifted, and a £500,000 contribution to a £2.5 million fund to help the industry’s self-employed and freelancers.

“We are working with colleagues across the industry to support those who have been hardest hit, and ensuring that we thrive as we recover,” said Ben Roberts, Chief Executive at the BFI. 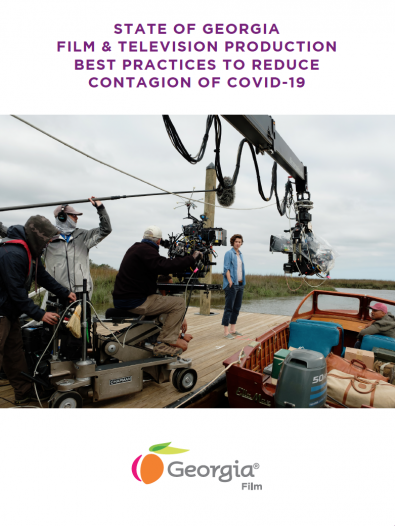 Many U.S. States, like in other countries around the globe, have developed strict and sometimes counter-productive protocols that must be met in order to operate a production safely.

While many TV shows are resuming production, there are still no audiences allowed in the studio and featured guests are interviewed online. This will be the case until at least next Spring or perhaps longer. Meanwhile, those working are happy to be back, even if it is under strange circumstances, with social distancing and greater hygiene measures now firmly in place.

By chance, some technology providers are finding a silver lining in the pandemic. Custom Consoles, makers of studio and production control furniture, said that it has seen significant demand for its new Operator Safety Screens, calling it one of the fastest selling new products in company history. Designed to help technical control room and media facility staff maintain social spacing against coronavirus infection, the screens started shipping in early May and the company has reported more than 300 sales in three months since.

"Many broadcast media facility managers initially responded to Covid-19 by encouraging staff to work from home," said Neil Reed, Managing Director at Custom Consoles. “The Operator Safety Screen was developed in response to demand for a practical and effective way to reduce the risk of cross infection. Sales have doubled in August and September as broadcasters returned from lockdown to a carefully supervised regime including temperature checks, screen dividers in all galleries, UV cleaning and one-way pedestrian routes. Customer feedback shows quite clearly that the screens do indeed give protection; provided shared IT tools and desk surfaces are sterilized."