The cancelled Las Vegas 2020 NAB Show delayed the US launch of commercial Nextgen TV, but broadcasters don’t let technical problems ruin an exciting show. They kept the NAB Show going with a come-as-you-are, delicious and nutritious, Las Vegas-style, virtual broadcast technology buffet, and made it look like that was the plan all along.

From the first National Association of Radio Broadcasters (NARB) convention in 1923 until 21st Century NAB Shows, nearly every visitor and exhibitor wore business attire with leather shoes. Big exhibitors offered special discounts for purchase orders received at the show to justify the expense of exhibiting. About the time most vendors stopped exhibit floor discounting in the 1990s, NAB Show attire began trending towards casual and comfortable. This year, the 40,000 industry professionals who attended the 2020 NAB Show stayed home and  'phoned it in.'

It wasn't by choice, but visitors, exhibitors, speakers and leaders dressed in their favorite home attire, sat in their favorite chairs, and did like everybody else in the Spring 2020 broadcast TV industry by leading the way into social distancing from home on the internet. The NAB, exhibitors and session presenters quickly adapted to the new reality with the NAB Show Express, and streamed it on the internet for free. Social distancing made the 2020 NAB Show and BEIT sessions the easiest NAB event ever on time, budgets, laundry and feet.

Rarely but sometimes, the magic of broadcast karma can be kind. The last time NAB cancelled a show was 1945. Who knows what would have happened to local TV had the NAB 'rolled the dice' and not cancelled the 2020 Show? Managers might have unwittingly brought the virus home to a thousand local TV stations or more. Broadcasters dodged that one. Good call, NAB.

The following summarizes the most significant ATSC 3.0/Nextgen TV information gathered from these and other post-NAB Show 2020 resources.

Virtually everyone agrees the pandemic is delaying ATSC 3.0 progress, not a lack of commitment, making its 2020 launch in 60+ markets more “2020ish,” quipped Rick Ducey during the GatesAir Webinar. He described Nextgen TV a ‘two-sided market.’ One side requires broadcasters to transmit it. The other side requires many people seeing it. CE manufacturers must flood the market with affordable Nextgen TV receivers.

Ducey’s company has been asking different groups in the ‘ecosystem’ their expectations about Nextgen TV. What are they hearing? What do they think is going to happen? What are Nextgen TV’s capabilities? What does the timeline look like?

Ducey summarized the answers. “It’s a bit of a mixed bag. Different people have different levels of understanding and different expectations. That’s something we on the industry side need to try to get synched up to really have a meaningful impact on the broader marketplace.” Agencies and marketers have lots of questions and some think they know what is true. Expectations will change as Nextgen TV moves forward. Most exciting to the advertising community is that it combines the best of linear TV with data and the ability to target audience segments and make it interactive.

Advertisers expect Nextgen TV will need at least 50% household penetration before it becomes a competitive advertising platform. “To really be competitive in the space, going to the ATSC 3.0 transmission platform is a key step, but there’s a whole lot of back end stuff and middleware that needs to come together to really make broadcast TV as competitive as it can be with digital media,” Ducey said.

While targeted advertising opportunities are significant, Ducey continued “there are other things outside that core marketplace of advertising” that TV stations and groups are exploring while looking at Nextgen TV business models, such as spectrum leasing and private wireless data. Ducey’s company predicts a potential 8% annual growth rate for Nextgen TV, between approximately 2023 to 2030.

Ducey said ATSC 3.0 is exciting in the advertising and marketing space because “it has the ability to bring a lot of things together,” and it will bring new viewer targeting competition to MVPD, vMVPD, OTT and CTV, not just on the transmit side but the receive side for household-level local storage. Broadcasters will also have unique advantages such as geotargeting with SFNs and geo zones, audience targeting with data-matching, decisioning engines for dynamic ad insertions, inventory management and audience measurement of OTA and connected viewing. ATSC 3.0 is a giant step away from blanketing a market with a one-way RF TV signal and hoping for good results.

ATSC 3.0 allows broadcasters to match content to data-defined audience segments to improve performance. Ducey asked “What happens when those audience segments see an ad? What do they do?” Advertisers can see what TV sponsorship activity actually returns, not by ratings, but by performance. What is important is that “it has to play well with a number of other products of the overall business model to have a whole stack of technologies and data available.”

NAB CTO Sam Matheny opened his comments by saying ATSC 3.0 has better pictures, audio, security, interactive engagement, distribution via IP, and the ability to configure a transmission to meet market needs such as modulation, coding, PLP and SFN. About 950 spectrum-repacked stations now or will soon have ATSC 3.0 - capable transmitters on the air, needing only an exciter upgrade or reprogramming to broadcast an ATSC 3.0 signal.

Stations are asking questions about ATSC 3.0 and those questions can sometimes go to the engineering department. NAB CTO Sam Matheny suggested engineers use the NAB’s ATSC 3.0 Transition Guide to help TV management executives understand the transition issues. “Its not meant as a technical deep-dive,” Matheny said. “It is meant to address transition issues on a market basis and offer some best practices for how that might take place.” He referred stations who are thinking about becoming a host ‘Lighthouse’ station, to the Pearl Host Station Manual on the ATSC website resources tab. 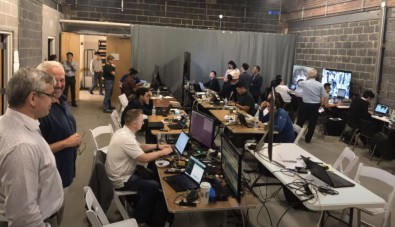 NAB-hosted interop testing at the ATSC 3.0 experimental station in Cleveland.

The NAB has organized several “Interops” hands-on testing sessions for interoperability, interactivity and advanced features such as modulation and encoding. Interops sessions are opportunities for professional equipment and CE receiver manufacturers to get together at test facilities in Cleveland, Santa Barbara and the Phoenix Partners Group, to test some of the new capabilities and ensure all features work across all different TV sets the same way.

At this January’s CES LG, Samsung and Sony announced higher-end 20 Nextgen TV models, from 55 to 85”, 4K UHD and 8K. The Samsung Nextgen TV models are all 8K. All the first models have dual ATSC 1 and ATSC 3.0 receiving capabilities. There is a great deal of interest in Nextgen TV on the consumer side and a strong desire to introduce new home receiver devices that connect to a display via Wi Fi or HDMI, targeted to sell for USD $200 or less.

Due to growing interest and activity in 4K UHD, much of Matheny’s presentation focused on it. 4K UHD requires significant OTA bandwidth which may not be possible during initial deployment mode with channel sharing, and perhaps in the future as stations find more ways to produce revenue with OTA bandwidth. A ‘Lighthouse” station will probably broadcast 4 or 5 channels in 1080p with HDR, like the KVCW 3.0 model (see below).

ATSC 3.0 is based on internet protocol (IP) as its transport layer. A scalable ATSC 3.0 encoder can split a 4K signal into a base layer for 1080p with HDR that would be broadcast OTA, and an enhancement layer transmitted via broadband. The receiver recognizes two incoming IP streams that need to be put back together to display a full 4K picture using the enhancement layer for detail information, similar with how color information is added to a baseband monochrome signal. Without the broadband connection, the receiver displays the 1080p HDR OTA stream, which alone is superior to today’s best ATSC 1.0 1080i SDR pictures.

While some tests, experiments and measurements can be performed remotely, there is no substitute for the physical work required to support experimental testing and field data collection and some of that work has been delayed. There are also potential pandemic-related delays in the manufacturing of ATSC 3.0 chipsets and Nextgen TV sets that remain unknown.

In the meantime, KVCW the Sinclair Broadcast Group CW affiliate in Las Vegas, planned to launch ATSC 3.0 broadcasting just before the 2020 NAB Show opening but its debut was delayed by the pandemic. KVCW 3.0 was scheduled to begin broadcasting programming on May 26, marking SBG’s first commercial deployment of the Nextgen TV standard.

KVCW partnered with three other Las Vegas commercial network affiliates to broadcast all four station’s content in ATSC 3.0, sharing equal portions of the spectrum. In return, the partners will co-host KVCW’s channels in ATSC 1.0 including the CW and several Diginet channels.

KVCW 3.0 will provide an early transition model effort every market will individually need to create and launch through cooperation and coordination between stations and groups. Channel sharing agreements will force broadcasters to work together in ways they never have before, because everyone recognizes the value and benefits for stations and viewers uniquely possible with ATSC 3.0.