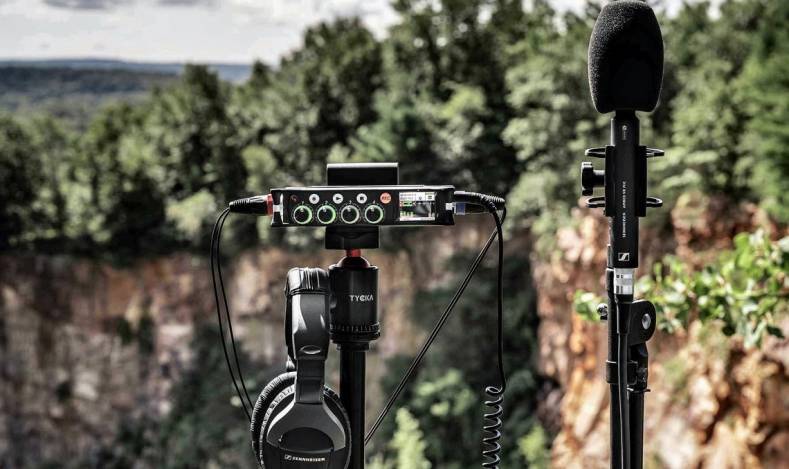 Sound Devices has upgraded its MixPre line of portable audio mixer/recorders and Zoom will soon deliver its F6 mixer/recorder. Both have a revolutionary new feature: so much headroom that it no longer matters where the gain level is set during recording. Both explosive high and quiet volume signals can be recorded at full audio quality without touching a control.

That is a major advance for field recordists: basically hands free gain riding. With these recorders, clipping is impossible, regardless of audio levels. Both the Sound Devices and Zoom recorders introduce the ability to record 32-bit floating point WAV files. The primary benefit of these files is their ability to record signals exceeding 0 dBFS. There is in fact so much headroom that from a fidelity standpoint, it doesn’t matter where gains are set while recording. 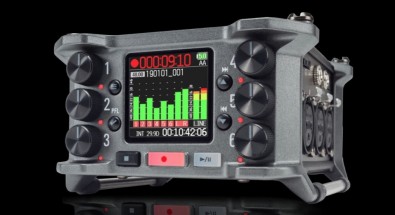 The idea of 32-bit floating point recording is very new and a bit technical to explain. But to sound operators, at a price beginning at about $650, the good news is you can buy a mixer/recorder that allows risk free level riding. Like everything, there is a trade off. The 32-bit floating point files are about 50 percent larger than standard 24 bit audio files. Some good news is audio levels in the 32-bit float WAV file can be adjusted up or down after recording with most major DAW software with no added noise or distortion.

Traditional 16-bit WAV files store uncompressed audio samples, where each sample is represented by a binary number with 16 digits (binary digit = “bit”). These numbers are “fixed-point,” because they are whole numbers with no decimal point. Numeric values represent a discrete voltage level corresponding to the signal amplitude. 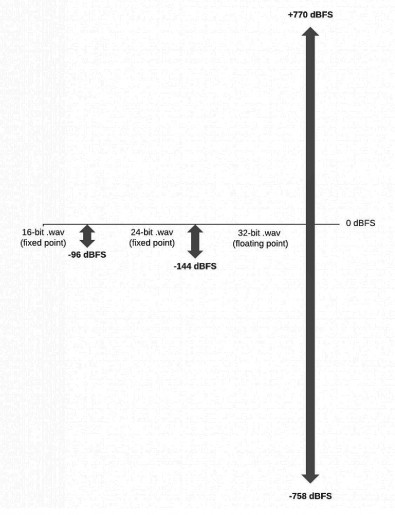 The number 65535 represents the maximum amplitude (loudest) the signal can be, and the lowest values represent the noise floor of the file, the lowest bit toggling between 0 and 1. The maximum dynamic range that can be represented by a 16 bit WAV file is (0 dB – (-96.3 dB)) = 96.3 dB. Moving to 24-bits (fixed point) WAV files improves on the amplitude resolution of 16-bit by extending the 16-bit word, adding 50 percent more bits, to make a 24-bit word.

Compared to fixed-point files (16- or 24-bit), 32-bit float files store numbers in a floating-point format. This is fundamentally different than fixed point, because numbers in these WAV files are stored using decimal points and exponents. This difference is significant because much larger and smaller numbers can be represented compared to a fixed-point representation.

The first bit indicates a positive or negative value, the next eight bits indicate the exponent and the last 23 bits indicate the mantissa, or the part of the algorithm that follows a decimal point. The dynamic range that can be represented by a 32-bit (floating point) file is 1528 dB. Since the greatest difference in sound pressure on earth can be about 210 dB, from anechoic chamber to massive shockwave, 1528 dB is far beyond what will ever be required to represent acoustical sound amplitude in a computer file.

Most modern DAW software can read 32-bit float files. When a DAW first reads a 32-bit file, signals greater than 0 dBFS may first appear clipped since, by default, files are read in with 0 dB of gain applied. By applying attenuation to the file in the DAW, signals above 0 dBFS can be brought below 0 dBFS, undistorted and used just like any 24- or 16-bit file.

For 32-bit float recording, exact setting of the trim and fader gain while recording is no longer a worry. The recorded levels may appear to be either very low or very high while recording, but they can easily be scaled after recording by the DAW software with no additional noise or distortion.

Recording 32-bit float audio files, along with high performance analog and digital electronics that can take advantage of its massive dynamic range, offer sound designers and sound mixers a new way to record audio. This is especially useful for applications where very loud, unexpected sounds can be captured without the use of limiters.

This is a remarkable new advance in mobile recording technology.