Reading spec sheets for microphones these days can make one’s eyes gloss over. So much is so similar. Yet, we know each mic sounds a bit different, which is where subtle creative differences come into play. One especially mystifying spec to many is whether or not a mic has a transformer. What does a mic transformer do and is it better with or without one?

First, a little background and history is needed on the question. In the earliest days of pro audio, transformers — for microphones and other gear — were used to provide electrical isolation between different equipment components and to create balanced interfaces to minimize buzz and hum. They were also used to match levels between different devices.

All professional studio condenser microphones, then and now, need a balanced output. Some kind of circuitry is needed to convert the ultra high impedance capsule signal to a low impedance output. Prior to the mid 1970s, these mic outputs were balanced by means of an output transformer.

In the late 70s and early 80s, transformerless outputs came into play. Almost overnight, audio transformers were considered outdated technology. Not only did transformers cost more to produce, but removing them meant the audio from the microphone was cleaner. In those days, “colored” audio was considered something users did not want. Transparent, clean audio was in demand.

In today’s world, most new microphones have no transformers. Solid-state circuits have been developed to replace them. With good design, these circuits can out-perform transformers in almost every respect. They have far wider signal bandwidths with a more linear frequency response. Significantly lower distortion and considerably better phase and transient response are also benefits. 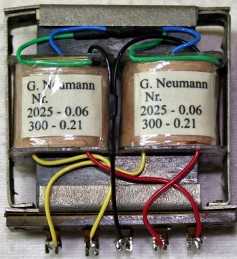 As you might have guessed by now, the highly transparent sound of modern microphones can be too technically perfect for some discerning ears. Many of today's producers seek the vintage colored sound of older gear using transformers. Though at least 90 percent of a microphone’s sound is in the capsule, the transformer debate is a key reason vintage microphones remain in such high demand.

The subtle flaws of transformers lend a sonic character to a microphone that in many applications recordists enjoy. Some mics are used specifically to create a form of benign distortion in a recording. This is in fact a selling point for some mics still using transformers.

Use of transformers (or not) is still another reason that microphones are considered to be an artist’s paintbrush for sound. There is no right or wrong decision.