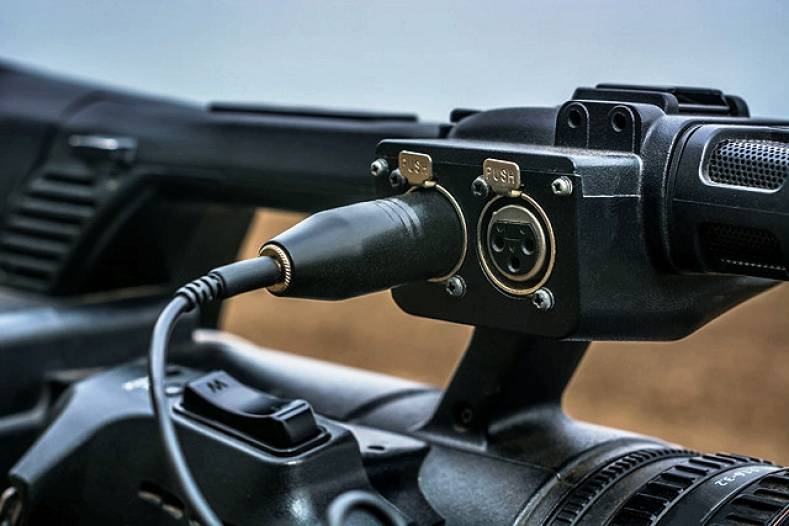 Most novice videographers can plug a microphone into a mic jack and get a reasonably good audio signal. However, at times, many get noise, distortion or an unusably low audio level. That is usually caused by mismatch in audio connection types.

To avoid such audio problems, one must understand the differences between audio connections and signal types. As you might have expected, there is more to properly connecting audio equipment than just matching the plugs to the right jacks. In fact, there are four different types of signals in audio that can cause problems when mismatched.

Microphone level, according to a white paper from Azden, is the voltage signal produced by the weakest of all the audio signals. This is because of the nature of how microphones work. In general, mics produce a very low voltage and always require a pre-amplifier to boost the level before it is usable for recording. After a microphone signal passes through a preamp, it becomes line level.

Line level signals are much hotter than microphone level. This can be from the output of a mic preamp or audio mixer. There are two types of line level: +4dBu "Pro" Line Level or -10 dBV "Consumer" line level. 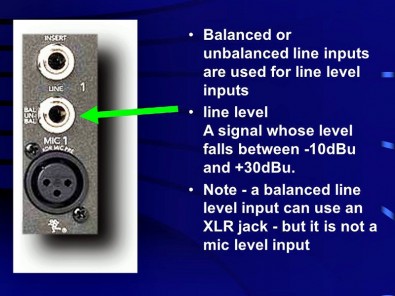 The normal level of the audio signal in a professional studio is +4 dBu or about 1.23 volts (0 dBu=.775 volts). When the console output meters read "0" on a VU meter, the level of the signal is +4 dBu. This is pretty much standard in the industry for all professional consoles and audio gear.

The level of the audio signal in home stereo equipment, inexpensive "semi-pro" gear is -10 dBV or .316 volts (0dBV=1 volt). This lower "line level" is about 12 dB lower than professional line level. One of the compromises that is present in such gear is that the inter-connecting wiring is four times more likely to have unacceptable hum or noise due to stray fields. The professional line level is higher and therefore less-sensitive to the introduction of noise.

There is a different level for musical instruments. This sits between microphone level and line level, and still needs pre-amplification. The kinds of devices that use this signal type are devices like electric guitars and keyboards. It is not something videographers typically have to worry about. But when using them, the input levels are different. 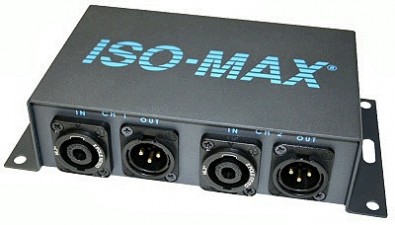 Other oddball inputs for videographers are loudspeakers. This level is the hottest of all, with much higher voltages that should only be sent over specialized speaker cable. For video, speaker connections are not often part of the sound production process. But camera operators need to know about it. Azden warns users to not try to do something silly like connect the output of a speaker amplifier into a camera’s microphone input. That’s a very bad idea!

Setting up a good gain structure in an audio system will take advantage of the dynamic range and signal-to-noise ratio of each piece of equipment. Mismatching signal types will lead to suboptimal gain structure.

If a microphone is plugged into a line level input, a very low level will be received. The microphone signal is weak and the line level input has no pre-amplifier so in this case the audio signal will barely come through. This usually leads an unwitting sound operator to conclude that either the microphone is not working or prompts them to turn up the input gain significantly.

Doing so might actually get the audio signal to show up on an audio meter or become audible in monitor headphones, but because the input gain is juiced, a lot of noise will be introduced, yielding poor quality audio.

If a line level output is plugged into a microphone input, it will create distortion. At the very least the signal will be extremely hot, offering little control over the level. The sound operator could try to combat this by turning the input gain way down, and/or turning down the volume of the line level device, if such an adjustment is available.

Doing so might even seem to work, but this setup actually demonstrates very poor gain structure and will not yield as clean of an audio signal as if the input and output signal types were matched.