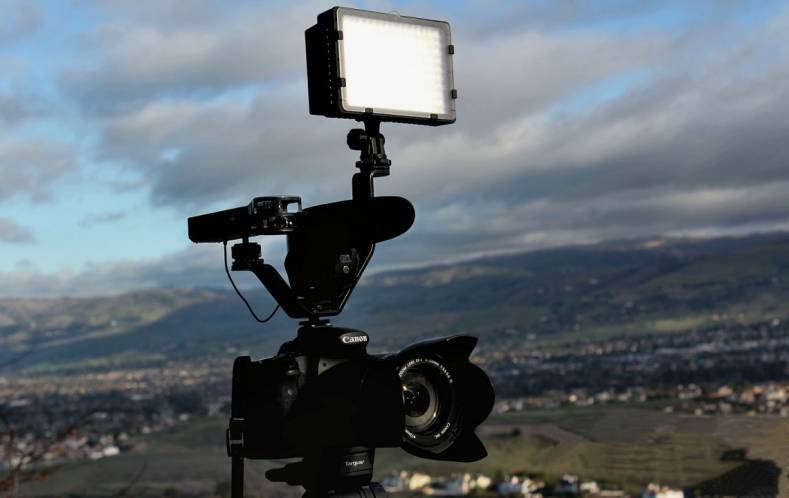 Because we experience the world in three-dimensional sound, why shouldn’t we always choose a stereo over a mono microphone for a video camera? The question sounds like a no brainer, but stereo audio is not always the right choice in video production.

In basic terms, stereo means two channels of audio, where mono means one channel. In stereo, there are left and right channels; mono is only one channel. Stereo is not better than mono. They are just different. In fact — on the same video shoot — both stereo and mono sound is often chosen on a shot-by-shot basis. The difference is determined by the type of sound being recorded.

Most video cameras, whether professional or consumer types, have at least two audio channels. Pro cameras often have two XLR microphone inputs, while consumer models usually have a single 3.5mm stereo mini-plug microphone input. Some cameras don’t have any microphone input at all. So make sure you know the camera’s capability in advance and choose the microphone accordingly.

Sometimes the difference between stereo and mono microphones is explained in an analogy to a camera’s wide angle prime versus a zoom lens. A wide-angle prime lens can let us see children playing to the left of the frame and a bird in a tree to the right. With a stereo mic (the wide angle prime), the audio allows us hear the children playing on the left and the bird chirping on the right plus all the other sounds in the park.

However, if we want a closeup image of the bird and to better hear its song, we use a zoom. The zoom lens will give us a detailed closeup image, and a mono shotgun microphone will do the same for the bird’s song. 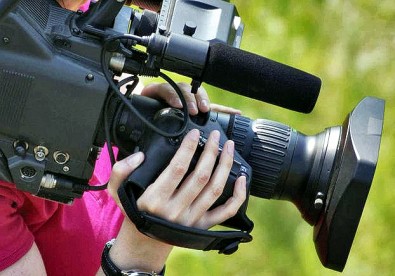 On-camera microphones are often best used in a monaural configuration to record dialogue. A boom is even more desirable. A stereo mic would be used for ambiance.

A stereo recording on video creates more of a sense of place, or a listening environment, than a mono mic can. A stereo microphone is important when recording live music, which can come alive in two-channel sound. However, the sound of the music recording will change if the camera is moving around. The trick is to find the sweet spot in the room where the music sounds the best. Place the camera with the external stereo microphone in that spot on a tripod and leave it there. If you want more coverage for B roll, use a second camera and shoot around it.

Every time a stereo microphone is used, be mindful of where it’s placed. This rule is critical even when shooting a scene making a simple telephone call. There must be coordination between the picture and sound, or the audience will be unable to follow.

Outdoors, a stereo microphone should be considered. It is hard to capture an outdoor environment with a mono mic. Stereo can enhance presence of outdoor video footage. For example, a stereo mic will let viewers hear which direction a bird’s song is coming from, the stomping of leaves in the underbrush from an unseen animal will be more life-like and the wind sweeping through the valley will come alive.

Essential, however, to stereo microphones used outdoors are windscreens. Do not use the simple foam windscreens that come with most mics. Instead purchase professional-quality windscreens and shock mounts that completely protect the mic from the environment. These can be expensive, but are essential to all outdoor microphones. Wind noise can easily destroy the stereo effect.

When is a mono microphone better than stereo? To understand, look at the design of a mono shotgun mic, which has a single microphone element. That element is normally placed at the back end of a barrel, which has cancellation vents on both sides. This gives the microphone a narrow pickup pattern that is called super-cardioid.

The result is a microphone that is most sensitive to sounds coming from the direction it is pointed, while being less sensitive to sounds from the sides and rear. This directional pickup is preferable for most dialogue and voice-over applications. It will make the subject’s voice and the recording more intelligible. And whenever recording interviews, always record in mono.

Mono microphones also pick up sounds at a greater distance than stereo microphones, again because their pickup pattern is more focused and extraneous noise is reduced. 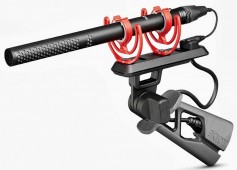 The super-cardioid polar pattern from the Rode VideoMic is highly directional, focusing on the subject in front of the camera, and minimizing any surrounding sounds.

A mono shotgun microphone, like the Rode Videomic, is highly directional, meaning it is more sensitive to sounds directly in front of it. Most on-camera mics are generally somewhere between 15 and 45 degrees. These are great for recording a specific sound and blocking out background noise. The Videomic has an X/Y pickup pattern, which means that the two microphones inside are angled perpendicular to each other. There are many ways of building stereo microphones, but a proper X/Y pattern will give users a reliable “wide stereo field.”

Another consideration is a newer category of microphones called “VR” mics, for virtual reality. These mic configurations usually combine four or more channels for a wider surround sound feel. 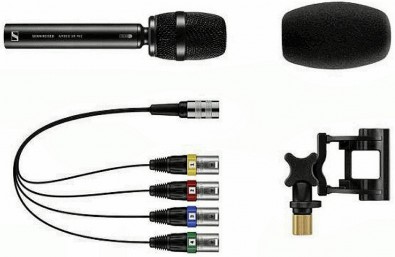 A leader in this area is Sennheiser, who makes the Ambeo VR Microphone. It records immersive audio for VR video productions. The mic was developed and fine-tuned to capture the total audio experience. The VR is an ambisonic microphone using four matched KE 14 capsules in a tetrahedral array.

This specialized architecture allows users to capture the sound around them from a single point, for 360-degree spherical ambisonic sound that matches the VR video content. The Ambeo VR Mic works with the included A-B encoder software plug-in.

As with all audio production, there is no one right way to do anything. This is why audio pros create a kit that gives them choices to use the right tool for the job at hand.