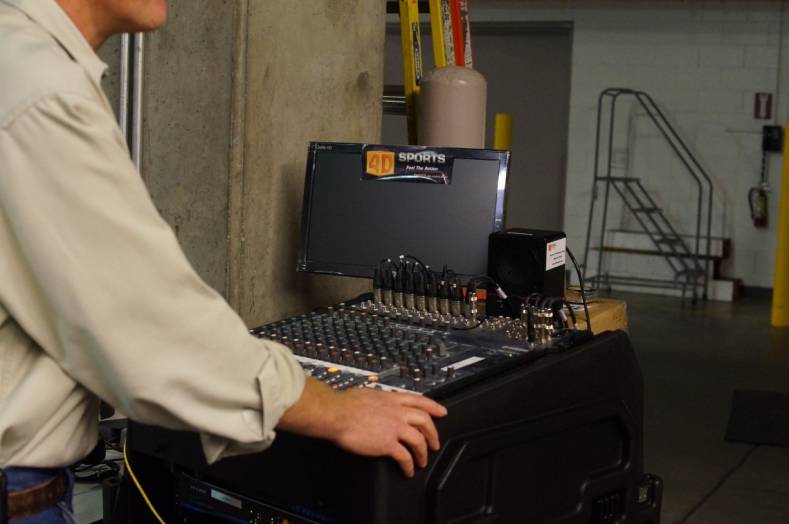 Amidst steadily increasing image resolution and multichannel surround sound audio, consumers now have access to the best viewing experience ever, but a company in Ohio wants to take it one step further and allow viewers to “feel” the broadcast during live events coverage.

Guitammer, a company that for years has deployed it’s “4D” hardware technology (using tactile and low-frequency transducers) in over 100 theatres to shake more than 14,000 seats in 10 countries worldwide, is now migrating the sensation to live broadcast television and sports arenas around the country to add another element to “fully immerse” viewers into a program—live and in real time. You might have also experienced the hardware version of this technology as part of an amusement park ride. Other applications for the hardware already include home theater, video gaming, simulated racing and an enhanced music experience.

“Given our experience with the technology, we saw an opportunity to extend it to broadcast television and add extra excitement to live events, like sports,” said Mark Luden, president of Guitammer.

After a series of proof-of-concept tests in 2013 (for NHRA live hotrod races on the ESPN2 channel), his company has now entered into a partnership with the San Jose Sharks of the National Hockey League (NHL) and Comcast SportsNet California to bring the technology to Northern California viewers. The official debut for Guitammer’s “4D Sports” technology at SAP Center occurred during the Sharks-Florida Panthers home game on November 20, 2014.

Under terms of the agreement, all of the Sharks 2014-15 games at the team’s SAP Center in San Jose that are telecast by Comcast SportsNet California will use Guitammer’s patented “4D Sports” broadcast technology, allowing fans at home to not only see and hear all the game’s action, but feel it, live and in real time. When players crash into the boards, all the bone jarring impacts and action causes your seat to shake accordingly.

“Comcast SportsNet is committed to providing its viewers with compelling and entertaining programming and is focused on utilizing innovative technology to enhance the fan experience,” said Ted Griggs, President and General Manager of Comcast SportsNet California, “We are pleased to partner with The Guitammer Company and the Sharks to provide a whole new perspective through this ‘4D’ technology, which has the potential to be a game-changer.”

It works by attaching a low frequency transducer, a live subwoofer, albeit silent on steroids (they recommend the wireless ButtKicker Kit hardware—originally designed for musicians to feel the bass as well as hearing it—but other companies’ tactile or motion technology can be used as well) mounted under your living room couch or recliner that receives signals from 76 pressure-sensitive sensors mounted around the boards at SAP Center and perfectly synchronises them with the video image on TV. These sensors, attached to boards with gaffer tape at both ends of the ice rink, capture the impact of players crashing into the boards and allows fans at home to feel as if they are sitting right on the glass in the arena.

“We’re compatible with a wide variety of proprietary and third-party hardware devices and systems,” Guitammer’s Luden said, referring to the broadcast technology as similar to live, virtual reality technology. “It can be loud and violently felt, or more subtly. Either way, you’ve got something in your living room that not many people have… and that’s the feel of the game.”

He said the system at the arena could be set up in four to six hours. An audio technician supplied by Guitammer sub-mixes the sounds with a dedicated mixer console at rink side and watches as the game action progresses. The operator can turn up the sensitivity of the sensors that are near where the game action is occurring. This allows the system to distinguish between a light and hard hit and shakes the living room couch accordingly. Basically, only the action occurring within the frame of the camera is enhanced with Guitammer’s technology. Each end of the rink is broken into four “zones” (from blue line to blue line, nothing in the neutral zone) and the audio technician opens up the board when play is in a particular zone. This way, the couch in your home does not shake when there’s no action seen. 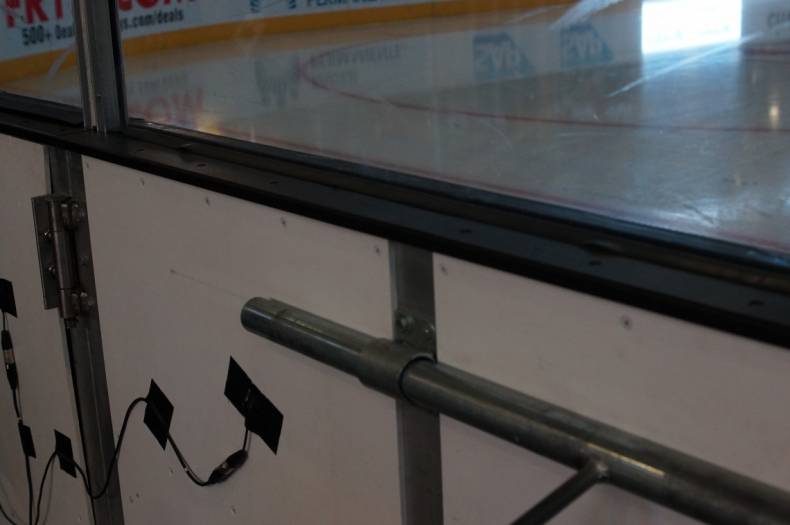 Pressure-sensitive sensors, attached to boards with gaffer tape at both ends of the ice rink, capture the impact of players crashing into the boards and allows fans at home to feel as if they are sitting right on the glass in the arena.

Guitammer’s technology includes single-access pressure sensors and a digital encoder for each sensor. The feed is then handed over to the production truck for inclusion into the main broadcast audio feed.

In 2015, the system will move to an online model that will bring the data captured with the sensors to a “second-screen” experience, on a computer or tablet, that will allow a user to directly monitor a specific player (a la, following NASCAR drivers during a race telecast). This opens up new opportunities for revenue, in a multitude of sports.

"Our goal is always to bring fans closer to the action, and what better way than to allow them to actually feel what's happening on the ice,” said David Koppett, Senior Executive Producer, Live Events, Comcast SportsNet California. “Guitammer's 4D technology helps us transmit the electric energy of a Sharks hockey game right into your living room.”

In the future, the company is talking about putting the technology in luxury boxes and special sections of a stadium (that can be sponsored for extra revenue). It also has plans to offer a processed, encoded signal that other people can license (e.g., viewers can choose their favorite player and follow them in ways you never could before, a la what NASCAR does with its telecast on Fox Sports).

In fact, this year the system will move to an online model that will bring the data captured with the sensors to a “second-screen” experience, on a computer or tablet, that will allow a user to directly monitor a specific player. This opens up new opportunities for revenue, in a multitude of sports, including the National Football League.

“Every time a player is tackled, you will feel it,” Luden said. “We see this as a big money maker for sports leagues and broadcasters looking for that something extra. You can choose your player and follow them in ways you never could before.”

“You can only do so much with video,” he said. “Right now, at 4K, it’s gorgeous. Sound only goes so far, because there are limits to what viewers can tolerate. You can't make it too loud or jarring, or it gets in the way of the viewing experience. This is a visceral experience that we think sports enthusiasts will really gravitate to. It’s another production tool to tell viewers at home the story.”

Broadcasters have been trying different approaches over the years to “immerse” viewers into a show, not just be a participant. For live sports, if you can't be at the game but still want to ‘feel’ the excitement of the game, this is way to do that.

The wireless ButtKicker Kit is available online at Amazon.com and at www.shakemycouch.com.