In the 1980s, it was easy to define a recording studio. For major studios, most of us would name the Record Plant, the Hit Factory, Criteria or Electric Lady among the premiere American studios. There were also some private studios, mainly owned by artists for making their own music. Today, however, the concept of the recording studio has been turned on it’s head.

Yes, there are still some major studios left, but most recording today has shifted to smaller, scaled-down systems in a variety of makeshift venues. Major studios are now normally only used for large budget projects. Whether broadcasters, independents or production studios, virtually everyone has their own private audio production facility.

The reasons for this transition are due to several factors. One is the explosion of personal media, like podcasts, and the fact that anyone — from individuals to private companies — are producing their own audio programming. This explosion of content has driven equipment prices down. Virtually any person or organization can now own the equivalent of a radio or television station.

Converting a house into a recording facility is neither cheap, or even legal in some communities.

Another reason is less spending on individual audio projects — from music recording to television production. Costs are much lower today than in previous times. Many music artists today record at home on small systems. They do this due to the collapse of the music industry. Some of the quality is quite good, but it depends — as always — on the skills of the operator.

Changes in technology have driven this recording transition. More powerful personal computers led the way. We are now in a computer-based universe, rather than depending on expensive hardware as in the analog days. Along with computers, the development of low-cost audio interfaces and the development of excellent plug-ins to emulate classic hardware processing have been important factors. 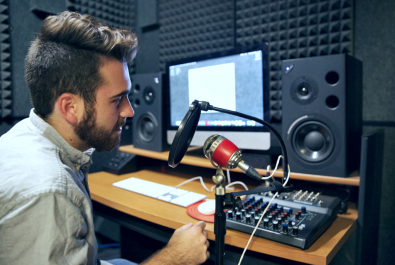 Also the internet has made it possible to link various producers, editors and artists from around the world. Major sporting events, like the Olympics, hire freelance audio and video editors regardless of where they are located. This global interconnectivity has redefined the production industry.

There have been some periods of pain and resistance in this transition. Major studio owners have battled home-based studio recording for years. Zoning laws and municipal ordinances in many areas make it illegal not to use commercial space, but that cat is out of the bag and it hasn’t thwarted growth of tiny facilities. The rise of project studio has put a number of major studios out of business.

However, both large and small studios are still being built in a new business environment. Recording is growing —not slowing down. Only the business itself has changed.

The good news is the cost of making professional quality audio recording has never been lower. Producer/engineers can now easily afford to create a small, task specific facility that can do very high quality recording. It is much easier to hang a shingle for recording than ever before.

The opportunity in recording is greater than ever before for those who know their stuff. Mediocrity always loses out in the end.