After doing the tedious work of completing a documentary or complex news feature, the last thing anyone wants is an underpowered, unenthusiastic narrator. In addition to a high energy level, we also want that voice to have presence and sound bigger than life. How do we ensure a “big” sound from the voice artist?

First of all, pick the right voice. If you want energy, cast an energetic voice artist. Don’t pick a narrator just because they are a known name. That is often done and is a major mistake often made by amateurs. Choose the right voice for your production. Spending big bucks on name talent does not guarantee a quality voice-over.

Once the artist has been chosen, getting a big sound in the recording studio is the next challenge. It can be harder than expected. There isn’t one grand secret to doing recording superior narration, but Waves, the digital plug-in specialist, has some suggestions:

Any narration must be of the highest quality. It will continue through the entire production so be sure it sounds good.

The first thing, Waves suggests, is to get a high quality recording of the voice. If you don’t have a good voice recording set-up of your own, it often pays to rent a high-quality voice-over studio for this one element. Once the recording is made, one of the easiest ways to get extra presence in narration is to simply turn the vox channel up until it starts to “sit above” any background music.

From there, use a parametric EQ to shape the sound. As a natural side effect in many voice recordings, there are a couple of specific bands of tone that are problematic. The mic, preamp, room and voice itself are likely to lead to several frequency bands in a few places that stack up.

Usually these frequency buildups will be fairly obvious. The usual culprits are room tone in the lower mids or mic proximity buildup in the low end. But there can be a little too much anywhere in the frequency spectrum for one reason or another. To correct this, listen carefully. A little attenuation in the right places can smooth the buildups and get the vocal to sit back into the track, even if it’s loud in level.

The trickier part to keeping narration full and upfront is when there is inconsistent tonal buildup over time. The narrator can hit a section where there is a sibilant consonant. To the end listener, the narration is smooth and upfront, but then it’s suddenly leaping out and disconnected. 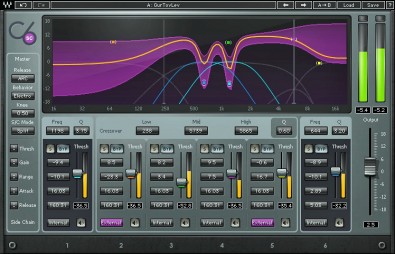 Waves C-6 Multiband Compressor Plug-In. Level control is a must. Pick a controller that has sufficient adjustments to tailor the sound as you desire.

For this, Waves suggests “the power sander,” the C6 multiband compressor ($69) plug-in. It simply balances out tonal inconsistency. If there’s too much 1.5 kHz hanging out in the sound, regular EQ is the way to go. But if the vocalist is changing proximity to the mic, at times there will be too much low end. That’s when multiband processing comes in handy. 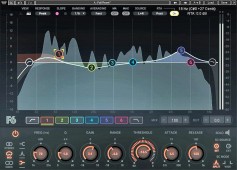 Alternatively, try a dynamic EQ to smooth the narration. The results will be somewhat similar, but the means of getting there are a bit different. A good dynamic processor will have multiple EQ bands that can be set to engage as each of their thresholds are crossed. This way, instead of isolating the sound with crossover points, will implement parametric EQ curves.

Compression is not the be-all-end-all solution to powerful vocals. The most important is the tone curve. If the EQ is not correct, no compression will help. Once the EQ curve is working, there’s a fair amount of flexibility in terms of how to compress the sound.

Approach setting the dynamics in stages: The first stage is manual level editing. If the narrator lets out a burst of energy, it can be tamed by attenuating it at the pre-insert stage. If the voice is smooth in delivery, a slower, more transparent compression is called for. If the vocal is choppy, the engineer can reign in the consonants in without over swinging. 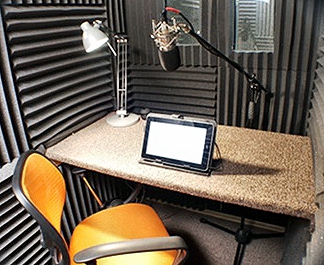 The last stage on the inserts is a subtle amount of “brute force” compression. This is compression that’s literally only being used to subtly push the vocal forward. Sometimes the voice just needs a little extra weight in the low mids. Look for limiters or plug-ins that offer the needed flexibility. The key to giving punch to narration is to use all these tools in moderation. One to two dB of attenuation is usually where the magic happens.

From this point, choose how to define your sound stage and mix the voice-over carefully with music and effects. Keep the narration front and center in the mix. Your production will take on a new sheen and aid viewers in following the action.