Students at Chapman University’s Dodge College of Film and Media Arts are getting a real-world education in the art of audio mixing, using a new Calrec Brio compact audio console as the teaching platform. The Dodge College at Chapman University, a private four-year university in Orange, California, is renowned for its state-of-the-art production facilities and award-winning faculty, many of who continue to work in the film and broadcast industries.

In fact, the new Calrec console is serving double duty at the school, as a key player in a busy television production schedule, and as a valued teaching aid to prepare broadcast students for real-world careers. Dodge College broadcast journalism students produce “Chapman News,” a highly rated live weekly newscast, in addition to a range of talk show and narrative programs. The newscast is broadcast on campus, and throughout Orange County and the greater Los Angeles areas, as well as streamed live on Facebook and YouTube.

David Goedhart, Television Studio Engineer at Chapman University's Dodge College, said that they needed a console that could handle the complexities of the school’s news and narrative curriculum. They also needed a console that would be simple enough for use in the classroom for basic audio monitoring.

"The Brio has far exceeded all our expectations,” Goedhart said. “It's intuitive, powerful, and full of great features. Best of all, Brio is giving our students fantastic hands-on experience with an industry-standard tool they'll be encountering in the real world of broadcasting.” 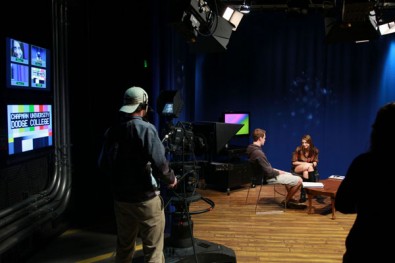 Students at the Dodge College of Film and Media Arts get hands-on experience with industry-standard tools that they'll be encountering in the real world of broadcasting.

"A key part of the mission of Dodge College is to be on the cutting edge of technology and put industry-standard tools in the hands of our students," says Dan Leonard, Associate Dean and Chief Technology Officer at Chapman University's Dodge College.

Students use the Brio console to mix a complex set of audio feeds for the news program, including audio from six anchors, four video playback channels, and reporters filing live news segments from two separate field locations. Brio handles IFB feeds from each reporter with its own dedicated mix, as well as incoming music tracks and other audio elements.

The Brio also plays a key role in classroom instruction. Particularly valuable are the DVI connections on the back of the desk, which enable instructors to project output from the Brio touch-screen display to a large screen in the classroom.

“Not only is the Brio an outstanding teaching tool, but it's purpose-built for TV broadcasting,” Goedhart said. “And because the Brio shares the same back end as the larger Calrec boards, our students will be able to walk right up to an Apollo, Artemis, or Summa someday, in their first professional jobs, and start mixing.”