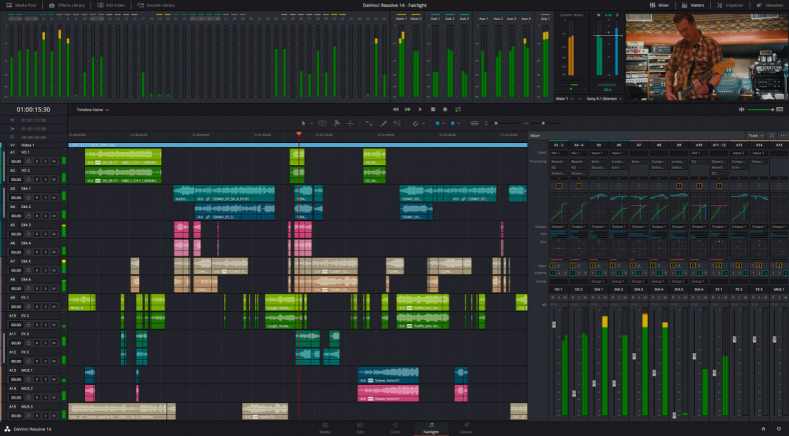 Blackmagic Design has released DaVinci Resolve 14 with a slew of new features, notably the addition of Fairlight audio. At the 2017 NAB press conference CEO Grant Petty explained that “The problem we are trying to solve is audio for the film and television industry.” The company expects that incorporation of Fairlight technology into the color grading and video editing system will transform workflows for the audio-for-video post.

New features include up to 10 times performance improvement, a whole new audio post production suite with Fairlight audio built into Blackmagic Design's DaVinci Resolve, and multi-user collaboration tools that let several users edit, color and mix audio from multiple systems, all in the same project at the same time.

What this means is that DaVinci Resolve 14 is like three high end applications in one. Customers get professional editing, color correction and the new Fairlight audio tools. All it takes is a single click to switch between the editing, color and audio screens. Then the new multi user collaboration tools let everyone work on the same project at the same time, so customers no longer have to import, export, translate or conform projects.

DaVinci Resolve 14 promises to change post-production from a linear to a parallel workflow, so everyone can work at the same time, giving editors, colorists and audio engineers more time to be creative.

Blackmagic developers have redesigned the Resolve processing engine to be up to 10x faster than previously. In addition to extensive CPU and GPU optimizations, customers also get better threading and GPU pipelining, lower latency, much faster UI refresh rates, support for Apple Metal and much more. This makes DaVinci Resolve 14 faster and more responsive than ever so customers get incredibly fluid performance and more precise editing, even on long timelines with thousands of clips. Scrubbing and playback are instantaneous and there is powerful new acceleration for processor intensive formats like H.264, making it possible to edit 4K images on a laptop.

Blackmagic announced the acquisition of Fairlight at IBC 2016. In six months the developers have integrated Fairlight's audio tools into the DaVinci Resolve video application.

Customers get a complete set of professional audio tools for recording, editing and sweetening, professional bussing, mixing and routing, and multi format mastering to 3D audio formats such as 5.1, 7.1, Dolby and even 22.2. The super-low-latency audio engine is designed to work with 192kHz 96-bit audio and delivers up to 1,000 tracks with real time EQ, dynamics processing and plug-ins on every track when used with the Fairlight Audio Accelerator (Petty stated it delivers around 60 channels on a regular computer). Plus the new Fairlight audio can record up to 96 channels while simultaneously playing back up to 150 audio channels, while mixing it all in real time! There simply is no other software available with this level of dedicated audio power.

The new Fairlight audio in DaVinci Resolve 14 features a full multi track timeline for subframe editing of audio, down to the sample level. The mixer is designed to let customers create sophisticated sequences and has several main, sub and aux buses for mastering and delivering to multiple formats at the same time. Every channel on the mixer features real time 6 band parametric EQ, along with expander/gate, compressor and limiter dynamics. Clip time warping lets customers stretch or compress audio without shifting pitch. In addition, every single parameter can be automated, even VST plug ins, using a variety of automation modes. 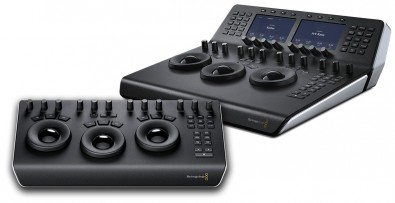 DaVinci Resolve 14 is available now in beta as a free download. The final version sees a price drop from $995 to $299. Couple that with the recently released micro and mini grading panels, and Blackmagic is offering a powerful post package as a very reasonable price.