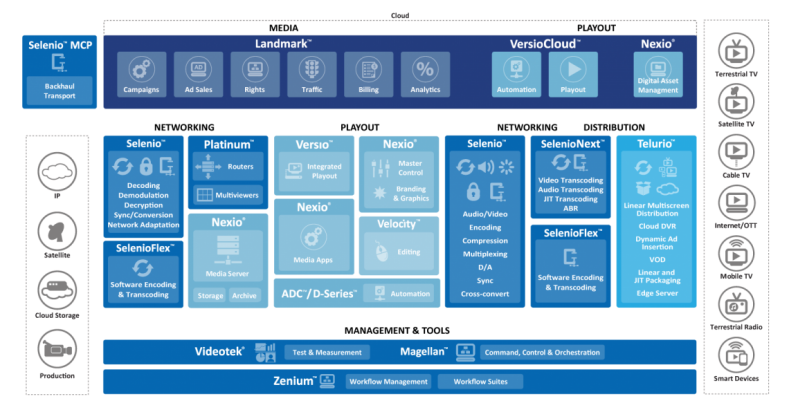 Charlie Vogt sees the Alliance for IP Media Solutions (AIMS) as key to the deployment of IP-enabled systems into the broadcast environment. IP allows broadcasters to leverage cloud services and software defined networks to create new business opportunities. Playout is just one area that stands to benefit from a move away from the constraints of SDI systems to IP. Vogt sees 2016 as being a landmark year for change—”this is going to happen”.

Imagine Communications is, like many other vendors, in a transition from a SDI world to Internet Protocol (IP) as the primary means to interconnect video systems. IP-enabled platforms lead naturally to software-defined networking and cloud services. These three solution areas are very much at the heart of Imagine’s product line-up along with TV Everywhere.

The Broadcast Bridge has talked to Imagine’s CEO, Charlie Vogt, about the move to IP and how the company sees the industry evolving in 2016.

Coaxial cable, connectors, and jackfields have served the industry since its inception, but it does seem that its days are numbered, as the ubiquitous IP looks set to take over with twisted pairs and optical as the physical layer.

Vogt started: “This is an industry that has built solutions to specifications that have been in place for 30 or 40 years, but when you are moving rapidly into a new domain like IP, and into networks defined by software and ultimately to virtualizing network functions, there has to be a move to new and open standards. Without open standards you don’t get the benefits of application development and interoperability.”

"You have to embrace this change or you are not going to participate", Charlie Vogt, Imagine Communications

For Imagine, the answer lies with the Alliance for IP Media Solutions (AIMS) the recently-formed trade organization that will foster the adoption of industry standards to help facilitate the broadcast and media industry’s transition from SDI to IP. Imagine Communications is a founding member of AIMS, other members of the alliance include: Arista Networks, Cisco Systems , EVS, Grass Valley, Lawo, Nevion, Snell Advanced Media, and The Telos Alliance.

One of the primary areas of focus for Imagine in 2016 is going to be AIMS. “Imagine has been on this page (AIMS) for 18 months. We reached out to Grass Valley, and now we have 25 companies who want to be part of it.” Vogt continued, “and TV stations and networks also want to participate.”

Vogt promises a lot of activity in the next six months to forward AIMS and the introduction of IP. “We are trying to create broad, end-to-end infrastructure, with sponsorship from end-users and key suppliers.”

The company has been very active in the deployment of IP-enabled systems to its customers, “At Imagine we have around 110 next-generation field activities, up from 10 last year,” said Vogt. “There is an ecosystem that has to be embraced. We would love for an entire system to be Imagine, but in the new world of IP and cloud that is not the way these networks are going to be designed and built. So for all of us to participate and win, we have to create the right kind of ecosystem. In AIMS, we have a set of standards we all adhere to.”

Broadcast Bridge: do you see intellectual property resulting from this alliance?

The amount of energy that has gone into AIMS is going to result in a lot of intellectual property that will be licensed to the group. “We want to get it right, Imagine is spending $80M plus a year on R&D, and we don’t want to release products that miss the mark. So making sure we have the right alliance is necessary,” said Vogt.

Vogt likened the current move to video over IP to the change experienced by telcos when voice over IP took off. As broadcasters move to IP, and embrace the cloud, they will see benefits. The cloud brings agility. For playout operations it brings the ability to launch new channels very quickly to test markets. Broadcasters can test new series, turn up new channels, and build cost-effective disaster recovery.

Broadcast Bridge: We have seen the rise of Netflix and other aggregators who deliver OTT, how does that affect the media landscape?

TV network customers are saying, “We have to figure out a way to control our own destiny’ which means you are seeing more à la carte offerings. Consumers want more choice in how they consume content.” Vogt continued, “Its easy to forget that all this wouldn’t be possible if broadband and the Internet was continuing to be as broadly deployed and robust as it is. Without that companies like Netflix wouldn’t exist.”

Broadcast Bridge: Do you see a future for over-the-air in this world of IP?

In the more mature markets consumers will continue to have more options. In the emerging markets we are still seeing broadcasters moving from analog to digital, and first time HD deployments. There is still a lot of activity in those markets. As the wireless network expands is provides a competing architectures

“SDI to IP is going to happen, went through same scenario in the 1990s (with telcos) when people said TDM is here for ever, TDM is now a technology of the past, ousted by IP.”

“You have to embrace this change or you are not going to participate (in the future) I look at the challenges we have to address all the opportunities that present, IP, Software defined networks and the cloud.”

Vogt went on to explain how this change impacts Imagine: “How do you sustain the existing base? How do you evolve? We have tilted our R&D spend toward innovation, we have a jump start and I think we have learned a lot. I am excited about the momentum in the industry, this is going to happen”