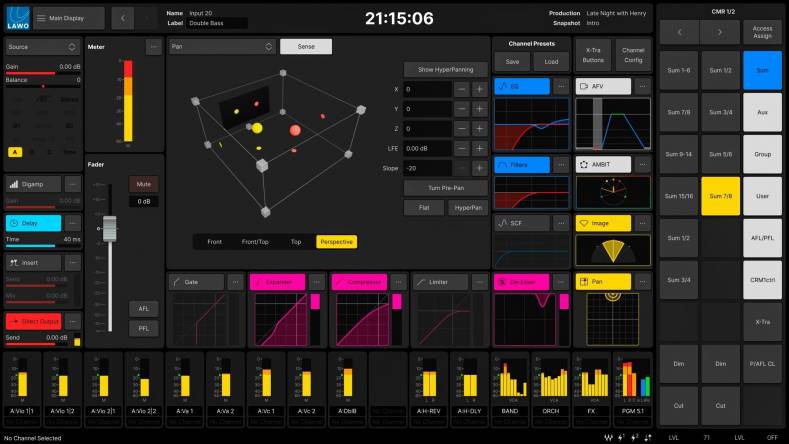 With their new software release, Lawo has unveiled a powerful new feature set for its A__UHD Core and mixing consoles. Users of the Nova73 networked audio router core learn that it is among the latest devices to come HOME.

Signal Ownership Groups
Signal Ownership Groups allow users to arbitrate resources that are shared on a network. Signals originating from a variety of devices or locations can be combined into logical groups. In production environments where several consoles need access to identical resources at different times, this feature helps to isolate control assignments to avoid accidental overrides by other networked consoles. Obvious candidates in this respect are input parameters (Gain, 48V phantom power, etc.).

Signal Ownership Groups can be created in HOME, Lawo’s IP infrastructure management platform, and are propagated to all consoles on the network. The ownership status of signal groups is conveniently displayed in the console’s GUI and reflected by the availability or absence of control options for the relevant signals.

Health Monitoring
The new software release furthermore provides extended health monitoring features, which are centralized in HOME, featuring status displays of critical system errors, warnings and notifications. These are displayed in the HOME and mc² user interfaces. Errors are categorized and displayed according to their severity, making it easy for operators to decide on the urgency of corrective action.

User Lists
The new User List feature makes signal routing for mc² consoles in A__UHD Core systems more intuitive and flexible. Given the potentially large number of signals on networks dealing with large-scale productions, the User List feature allows operators to assign all required signals to logical groups, which can be conveniently recalled at the press of a button.

Nova73 Integration Into HOME
With the integration of Nova73 into HOME, operators now have the freedom to keep using their trusted cores in a “hybrid” environment built around A__UHD Core and Nova73 systems. This integration involves seamless control of the Nova73 router, MIC Pre control for I/O stageboxes like DALLIS, and label transfers from HOME. With this integration feature, existing users can migrate to the latest mc² console architecture at their own pace.