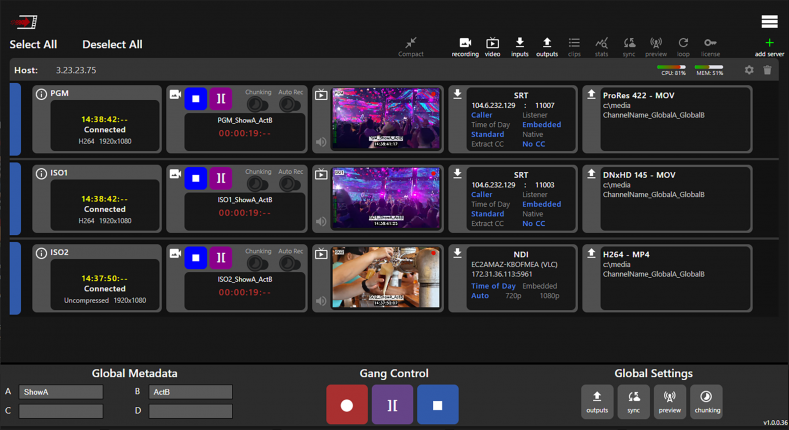 The latest improvements to StreamFile Core enable SRT streams to be edited in Avid Media Composer, Adobe Premiere, and other edit systems with no video transcoding. This feature alone is invaluable for social media and broadcast production teams in need of a quick turn-around, easy to deploy edit-while-capture workflow. Additional resiliency and robustness improvements allow StreamFile Core to compensate for network latency as well as other common internet bottlenecks. The platform features a refined distributed architecture, as its various modules can run in different geographic locations both in the cloud and on-prem. This architecture is well suited for a SaaS model, which Pronology recently launched through AWS.

StreamFile Core Enterprise is a tool for receiving IP video protocols and encoding them into editor-friendly formats such as ProRes, DNx, XDCam, H.264 and others. The ability to now edit SRT streams in Avid or Premiere with no transcoding offers users a host of benefits including increased efficiency as well as cost savings. StreamFile Core integrates both NDI® and Haivison SRT, providing increased IP and streaming capabilities. StreamFile Core has the ability to record ProRes and DNx with both .mxf and .mov wrappers allowing users working from home, on location or anywhere, to take their NDI or SRT streams and turn them into edit-ready files.

StreamFile Core also has the ability to create, record and share multi-views of live streams giving production personnel the ability to view different camera angles. With the ability to record this multi-view, users can view content in real time or go back to review with DVR functionality. Additionally, each user can customize their own multi-view templates and tailor their screen to the camera angles or other feeds that they want to view and record.

Pronology’s SaaS model of StreamFile Core is well suited for customers who do not want to manage their own encoding needs or prefer to keep tools, such as StreamFile Core, outside of their internal IT security zones. In this case, all customer access is through the secure StreamFile Core web portal.

StreamFile Core allows for an unlimited number of record channels based on hardware performance. Channel-based licensing is available for short term or annual subscriptions. StreamFile Core’s modular architecture allows users to record to storage located in their own facility or cloud-based storage. All StreamFile Core features are secured and managed through granular administrator-defined user credentials. It provides user permission levels such as recordist, media manager, production supervisor or producer, allowing access to various features based on user roles.