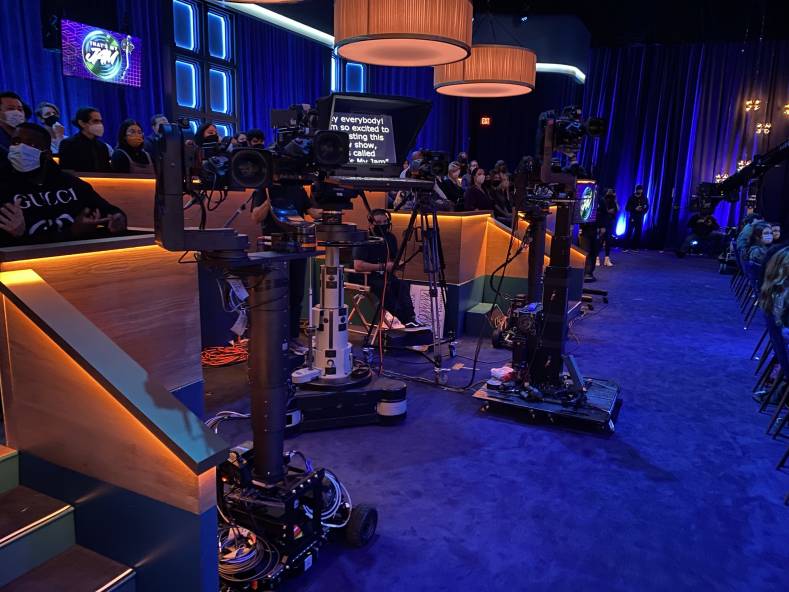 Using two AGITO Sports with two cameras each, and one AGITO Trax, the production was able to meet one of the prime requirements of Universal.

“Universal was very specific about not having a lot of camera people near the audience due to Covid safety protocols,” said Livia, the VP of west coast operations in Los Angeles for Jitacam, who was responsible for the setup of the three AGITO systems as well as serving as Steadicam operator for the show. “There would need to be a 6-foot space between any camera operators, plus those working on the show and those in the audience.”

“Glenn came to me and we set up a Zoom call to go over the camera plot of the show and to see if I might have any ideas he didn’t think about, especially with Universal’s 6-foot Covid safety requirements,” said Livia. “In the past, I had suggested the AGITO to Glenn for his shows, which he loved using. So, I suggested putting two cameras on one AGITO Sports house right, and the same house left, plus a single camera AGITO Trax behind the audience that would show the scale of the set with the audience in the foreground. The best part...all of the AGITO and camera operators would be sitting nowhere near the audience, with the AGITO pilots running wirelessly, and the camera operators hard-wired due to all the RF in the soundstage.”

All five Sony HDC-4300 cameras were mounted on SHOTOVER G1 gyro-stabilized gimbals, with long ENG-style lenses for the smallest profile as to not block the audience view of the stage.

“For the two double-camera AGITOs, we used the tower as the main pedestal and at the top had a plate made as wide as the wheel base so that both cameras could be mounted on top of that,” said Livia. “The double cameras on the AGITO towers were always at the same height. Having one high and one low wouldn’t have worked because if we did that, the lower camera would have been blocked by the audience sitting in the chairs, so both cameras needed to be higher up.”

With an AGITO maximum tower height of 6-feet, another 8-inch riser for the plate, plus the height of the G1, all four cameras were right at or above the talent’s eyeline – all except for Blake Shelton, who stands 6-feet, 5-inches tall. Neither of the two AGITO Sports dollies would move during production–just provide coverage of the game, but were easily repositioned between games, during what would be a commercial break. The AGITO Trax behind the audience was in constant motion for over-the-shoulder audience shots.

In addition to the three AGITOs with five cameras, there was one manned center pedestal camera – the only person near the audience but at least 6-feet away and a remote-controlled Mat Towercam from Jitacam set next to it, which basically took the spot of a second centre pedestal camera. Plus, there was a handheld camera on a tripod house left, with another house right. Additional miniature cameras were placed within the set of specific games the celebrities played.