Vizrt is working on Adaptive Graphics via a single graphics production workflow that supports the variety of different display devices.

As a veteran graphic production technology supplier, Vizrt continues to develop new types of software tools that bring a high degree of automation and single workflow-multi-platform content delivery for broadcasters working in the IP domain. And it’s making it easier for customers to choose the right solutions by offering three new versions of its pre-configured and tested Production Control Suite.

As part of its virtual NAB press announcements, Gerhard Lang, Chief Technology Office at Vizrt, said that the company is “still dedicated to developing tools that help customers to tell their stories,” but offering packages for specific purposes helps customers pick the right products and “increases their chance for success.”

Promoted as Flexible Access Solution Suites, the technology is available via a monthly/yearly user license that can be run on premise or in the cloud, but, bucking an industry trend, Lang is quick to point out that they are not based on micro-services that can be spun up or down in short (or long) increments. Instead the standard licensing model has been a successful one for several years and, he said, will continue to be so.

“The flexible access strategy has changed how we offer technology to customers,” he said, adding that they will eventually offer microservices. “This gives a license to customers to run it on their cloud infrastructure.”

Regarding the later, Viz Engine is now in version 4.3 and supports graphics production at a number of resolutions and formats. The focus for the latest version was on ensuring backwards compatibility with previous versions of Viz Engine and increasing performance on the same hardware. 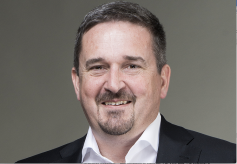 “A lot of the core modules have been rewritten, so for example, the input/output handling in 4.3 is more efficient than it was in version 3.0,” said Lang. “We’ve also optimized what gets processed so that the performance is better; using the same hardware.”

For Augmented Reality (AR), Virtual Set (VS) graphics, there’s the Extended Reality (XR) Suite, billed as the “ultimate representation of Vizrt's core capabilities for software-defined visual storytelling.” Removing the complexity from XR graphics and visualizations, it offers one of the first integrated AR/VS, video wall, mixed reality and telestration toolset on the market. 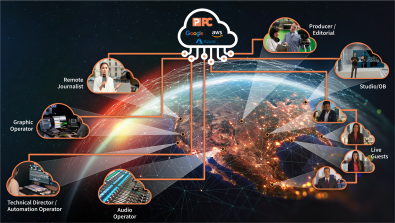 The XR Suite offers separate software plans for three workflow solutions. It enables different numbers of tracked cameras or video walls. In addition, the XR Venue Solution provides image-based camera tracking for any sport with pre-defined applications for graphics insertions and options for data integration or advanced AR Control. And the XR Playbook Solution offers a choice of analysis tools, various levels of virtual functionalities, and options for data integration and AR to embed analysis directly into a studio show.

Finally, in the area of “Adaptive Graphics,” Vizrt has committed extensive R&D to developing a single workflow that delivers content, and automatically adjusts resolution and format to support the specific display devices. So, a 3D graphic on a widescreen living room TV would also look good on a mobile phone, albeit with the graphics altered to fit the small screen.

“We are very focused on graphics readability,” said Lang. “It’s not just about ‘can the customer read the text, but do they want to read it?’ We’re providing the tools that give you the possibility to present the content in the most enjoyable way. We believe that live production needs to happen for every output format with the least possible effort but with the highest possible quality. That’s what readability is all about.”

This Adaptive Graphics platform actually recommends different display configuration and asks the designer to choose which one they like best.

“Our ambition is to give a tool to graphics designers that helps them with a suggestion on what that huge graphic meant for a living room TV would look like on a small 16x9 or vertical video,” said Lang. “And this is done in an automated way. Depending upon a set of parameters and individual settings, the scene will adjust itself to the new screen. It also provides the possibility for user interaction. So, if the designer is not happy with what they see (what the system suggests to them), they can adjust that as they see fit.”

For those using Viz Artist (a template-based graphics system) in tandem with Viz Engine, they can leverage the same metadata that is created during the import of the fonts into a Viz Engine so that it also creates the 3D text for the multiple distribution platforms.