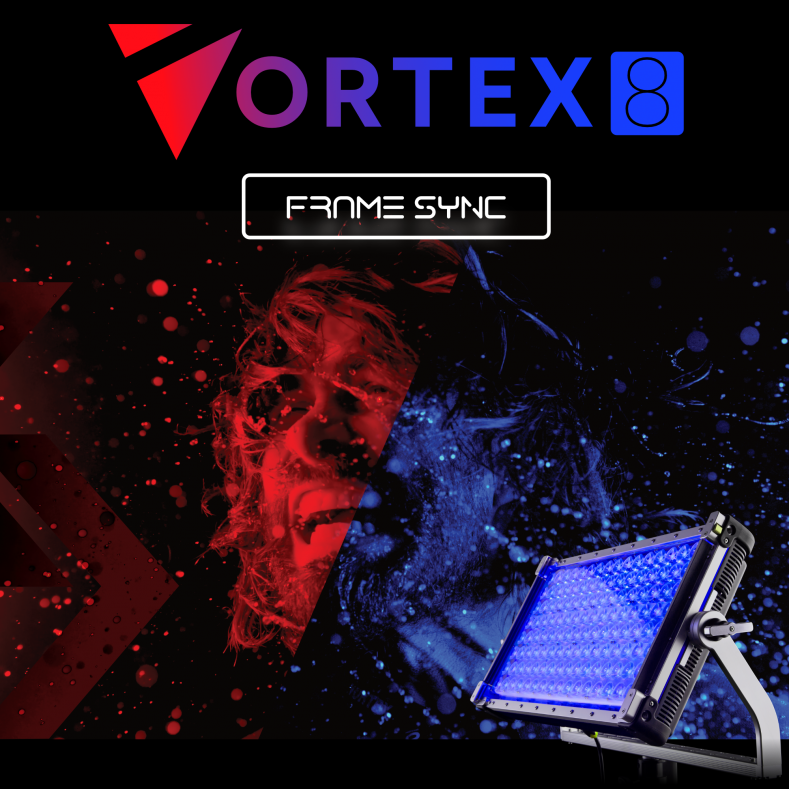 Shoot multiple, differently-lit scenes at once for dramatic creative effects.

CreamOS 1.2.0 is a firmware update for its Creamsource’s Vortex8 650W 2’x1’ LED fixture. It introduces a FrameSync function which enables in-camera effects for directors, DPs and gaffers.

Creamsource explain: With FrameSync, the Vortex8 can be triggered from an external source, such as a sync generator (e.g. Ambient Lockit ACN-CL), or the genlock output of a cinema camera, to ensure that it is synchronised with the camera shutter. This is especially useful when using effects such as strobe, where a lack of synchronisation between the camera and the lights can cause issues like frame tearing and flash banding. This feature alleviates the problem that most digital CMOS cameras can have with any flashing or strobing light source. It can also be used for frame-accurate strobing for advanced special effects, for frame rates up to 5,000fps.

Using FrameSync, users can set up a group of synchronised lights, an individual light, or a sub-group of lights, and can run a sequence of pre-programmed changes. For example, a light to the left of the talent can be set to red for every second frame, and a light to the right of the talent can be set to blue for every other frame. With CreamOS 1.2.0, there is effectively no limit to the number of fixtures that can be synchronised at the same time.

What this means in practice is that if you shoot at a higher than normal frame rate and then edit for a lower frame rate, there will be spare frames in the sequence. You could, for example, drop all the blue frames and the scene would look red. Drop the red ones and it would look blue. So for exactly the same scene, you can shoot two versions: a red one and a blue one - but at the same time. Then, you can use the two creatively - even blending multiple individual framestreams in post production. Because it’s all created in-camera, the colours are rich and fully-saturated.

FrameSync on Vortex8 has the most creative latitude when paired with a high speed camera such as the Phantom Flex 4K. With more frames, there are more options and combinations possible for creative lighting effects. Creamsource says that while their patent pending technology is already extremely useful in its current rendition, there’s a lot more coming in terms of expanded tools and functionality in the future on their FrameSync Platform.