In July 2020 Grass Valley was purchased by Black Dragon Capital. One year later, GV had much to tell the group electronically attending its Summer 2021 press conference. We who tuned in heard some very refreshing industry insights and were brought up to speed on a milestone GV solution initially intended to rollout at the cancelled 2020 NAB Show.

NAB Shows nearly always mark an incremental technology milestone, such as videocassettes, ENG cameras, computer graphics, chroma keys, digital effects and Master Control automation that allowed TV broadcasters to do what they do better and cheaper.

The ‘Faster’ milestone was added when Lucasfilm’s futuristic EditDroid non-linear editing system debuted at the 1984 NAB Show. Analog linear editing was a slow and tedious process, but EditDroid-like non-linear digital editing was a theoretic vision ahead of its time that ultimately became the standard for every video editor. The largest memory chips of the day were 512K. The largest consumer hard drives were a megabyte. There were no recordable videodisks or video CDs.

The 2000s replaced analog SDTV with digital HDTV, DVRs, servers and streaming internet video. Flat panels replaced CRTs and tons of once-supercool broadcast TV hardware all ended up in landfills. I’ve tossed some crazy-expensive, working but obsolete hardware (such as a Quantel DVE, Ampex ADO, various VTRs, VCRs, cameras and CGs) into dumpsters in the name of progress and never shed a tear. It comes with the territory.

Is the 2020s the decade of software, streaming video and remote TV work? With or without a 2020 NAB Show, the year marked a new TV milestone – remote working. The vision, needs and means for remote working are converging faster than the evolution of non-linear editing, and is driven by compelling new reasons and needs to quickly move forward with it. First is the need for social distancing to keep stations and crews healthy and happy. Tied for first is the business need to become more competitive at lower costs. 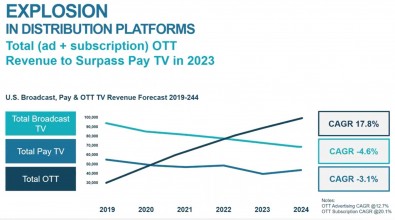 By the end of 2022, OTT revenues will exceed broadcast TV revenues. All graphics courtesy Grass Valley.

Shifting Sands
The visionary GV CEO and President Tim Shoulders began his press conference by saying “We saw, for the first time, in 2021 total revenue from advertising, subscriptions and OTT platforms exceeded total pay TV advertising and subscription revenue. As we look to the future, by the end of 2022 we are forecasting that total OTT revenues will exceed even broadcast TV revenue. We’re certainly seeing a shift of time and attention of our customers from traditional delivery platforms to new OTT delivery platforms.” What this means for customers, he said, is “that revenues are flat to declining, and it also means that content rights costs and the costs of production and distribution are often increasing. That puts a lot of pressure on those customers and their operating profits.”

GV sees a huge role to play in solving this riddle for customers with stagnating or decreasing revenues and higher costs. “We can help customers unlock new revenue streams. We can help them efficiently create and distribute specialty content. We can help to unify their streaming linear and social workflows, and we can lower the overall cost of production with new products to help them eliminate the risk of trying new revenue models. We can also help them increase their operating efficiencies and help them manage their operations anywhere. We can reduce integration and deployment costs by providing a well-integrated platform that works with industry standards, and we can help them improve utilization of their technology investments through pay-per-use programs,” Shoulders said.

At the heart of GV’s plan to help the industry is the GV Media Universe ecosystem. “This is how we see the industry transitioning to ‘software-as-a-service’ (SaaS) solutions that leverage the best of cloud technology and create a comprehensive platform for our customer’s production and distribution needs,” he said.

He went on to say “The GV Media Universe is more than a single solution. It’s an ecosystem bound by a universal user experience, and it encompasses a lot of connected devices, including not just our own hardware devices but also third-party hardware devices. It includes a vision for a wide variety of elastic applications that are cloud-native applications created by GV and also contributed by other media technology companies. It envisions an ecosystem that contains a robust set of marketplaces for things like service provision as well as additional technology integration as necessary.”

What's the Buzz?
Every NAB Show has a new product ‘buzz’ on the exhibit floor. The 2020 NAB Show buzz could well have been the GV AMPP because it addresses an impressive number of current industry challenges.

The core of the GV Media Universe is the Agile Media Processing Platform (AMPP). It is the magic that holds the components of the GV Media Universe together. AMPP includes patented capabilities for realizing these applications across the cloud and the connected infrastructure, and it solves technical challenges in the cloud such as timing and latency.” It’s all managed by AMPP, “so new applications that join the platform can have these problems pre-solved for them. It’s very scalable and allows for distributed workflows that can be cost effectively realized in a public or private cloud environment.” 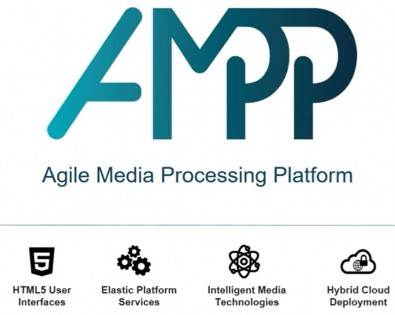 The GV Media Universe helps customers solve problems of location, particularly those created by the pandemic. The intelligent timing built into the system allows contributions from input, editing or control from anywhere for any application to all work together for the necessary workflow, when and where it is needed. It is all held together with a secure set of development principles to assure that a customer’s media remains their media, under their control.

Pay-Per-Use Advantages
Media Universe offers benefits to media companies and addresses pain points that have been prevalent for years. We all know live media requires low latency and near-instant response time. The Media Universe is built for live production. It is built on a modular architecture that offers nearly an infinite level of customizations of customer media factories. It is built to be scalable technologically and also economically, and offers a pay-per-use model for customers that changes the utilization match on media technology, especially compared to traditional CapEx models.”

Pay-per-use makes the best technology more affordable to those who need to use it less frequently, making it possible for less profitable productions to access the best technology without owning it. A fully dynamic deployment module eliminates much client-side software by putting it in the cloud, and it utilizes secure, centralized resources at known cloud service providers or under the supervision of a customer’s IT teams for on-premise deployment. A growing number of physical GV control surfaces are being integrated into Media Universe to preserve the familiar tactile feel of live production gear for operators.

“It’s a revolutionary cloud-native approach that addresses the needs of the broadcast industry. I think addressing these needs are extremely important for the industry. Improving yield-per-asset for our customers, or improving the amount of profit they get out of each media asset, is more important than ever. The GV Media Universe can help them lower their costs per asset which will increase their yield,” he said.

More Specific, More Passionate
Viewers are not going to go back to old habits of consuming media. Successful media companies will find ways to produce more targeted content, specific to certain audiences, and valuable to these smaller, more passionate audiences.

More than a year after its introduction, the GV Media Universe and GV AMPP is live and on the air today including customers such as CBS Sports, EA Sports and ATT, and adding new customers at a rapid pace. The number of customers using the platform doubled in 2Q21.