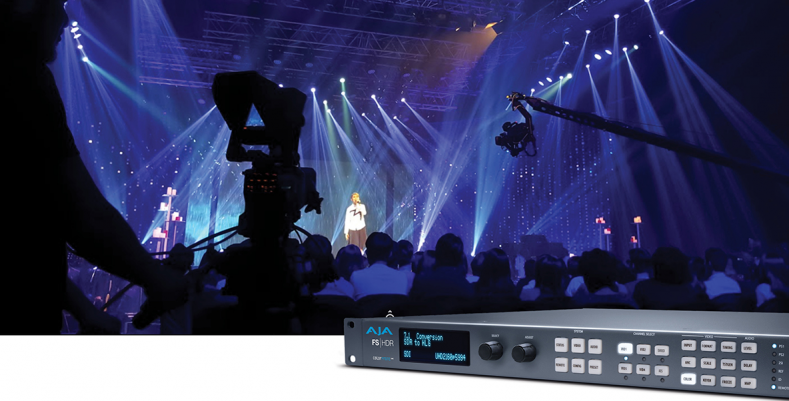 The studio at Visual Three boasts a robust 4K/UltraHD HDR infrastructure equipped with a range of AJA’s powerful broadcast solutions, including the FS-HDR real-time HDR/WCG frame sync and converter, to produce pristine content for live workflows.

Since 1997, the broadcast technology experts at Visual Three in Malaysia have provided regional and international support for entertainment and sports productions. From offering state-of-the-art broadcast equipment, to one-stop-shop production facilities, and streamlining delivery of live 4K/UltraHD HDR content, Visual Three is a local leader in broadcast services and production.

Under the direction of Business Development Director Jacky Lim, Visual Three recently provided technical support to help a local Malaysian television station deliver the first-ever live UltraHD broadcast in the country. While the client required an HDR master for archival purposes, the broadcast was to be transmitted in UltraHD SDR. Because Visual Three’s cameras and internal broadcast system are in HDR, the team leveraged FS-HDR to power live HDR and SDR conversions as well as embedding audio for final distribution. Visual Three used a similar workflow using FS-HDR to embed audio for final distribution for Singapore’s National Day Parade in 2019.

In live production environments, FS-HDR simplifies workflows for Visual Three by helping the team convert and match signals from different operating systems, as well as matching color between multiple camera brands. Throughout the pandemic, FS-HDR’s robust web-based UI has also provided a simplified workflow for remotely configuring and controlling cameras located in multiple locations. Lim added, “FS-HDR also features ports where you can install optional SFP modules to output media over 12G-SDI Fiber or Coax, making the device future-proofed for the most advanced workflows.”

Visual Three is also using AJA’s FS4 4K/UltraHD and multi-channel 2K/HD frame sync and universal converter for color matching cameras from a central control room. FS4’s procamp and color corrector are used to match the look of cameras that lack internal color correction functionality and for cameras positioned in fixed locations that are hard to reach and adjust, such as devices rigged in hoops during basketball games. FS4 also converts formats between UltraHD and HD and interlaced and progressive video, and is a frame synchronizer for incoming signals. Visual Three uses AJA’s Ki Pro Ultra to simultaneously record up to four HD channels as Apple ProRes files, with analogue or AES audio. The company previously used FS2 and Ki Pro for HD broadcasts and chose to upgrade with AJA for the proven reliability of its products.