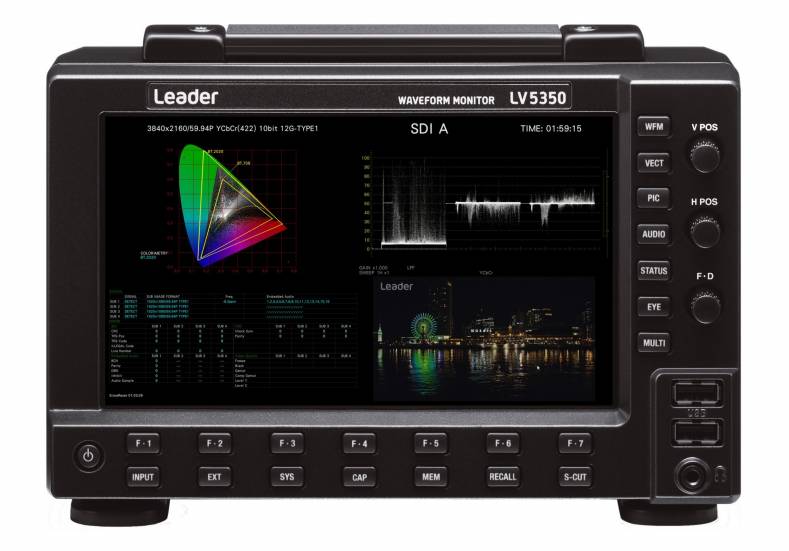 The new instrument will also be offered as part of the company's growing HDR rental fleet which is available both for outside broadcast content capture and in-studio finessing.

"The LV5350 is an ideal reference for camera crews shooting in 4K, ensuring that content is in perfect focus and correctly color balanced right at the start of the production process. It also contains all the tools needed during post to ensure the end result conforms to the precise standards required for terrestrial and satellite broadcasting as well as latest-generation 4K WCG HDR video-on-demand," says Balázs Rozgonyi, Video Assist Hungary CEO.

"4K WCG HDR has advanced from being a niche element of TV production to the point where it is now the default standard required by the major OTT service providers when commissioning new content," comments Kevin Salvidge, Leader's European Regional Development Manager. "The LV5350, like all instruments in our ZEN series, incorporates the full toolset needed for production studios, OB service providers and post houses catering for this rapidly expanding market."

Leader's ZEN series LV5350 waveform monitor incorporates a wide range of production-related features such as PQ, HLG and SLOG3 HDR measurement; a CIE chroma chart for color space issues; focus assist; simultaneous SDR and HDR monitoring; customizable screen layout; a tally interface; and support for 4K/UHD, 12G and 6G-SDI. The LV5350 can be used standalone or rack-mounted and operated on AC or DC power. Integral to the instrument are Leader's intuitive CINEZONE and CINELITE features which are used by many digital image technicians and directors of photography. The Focus Assist feature enables precise focus detection using an algorithm optimized for high resolution images across a very wide range of image contrast levels. The LV5300 offers the same capabilities as the LV5350 but also includes an eye-pattern display with jitter measurements.