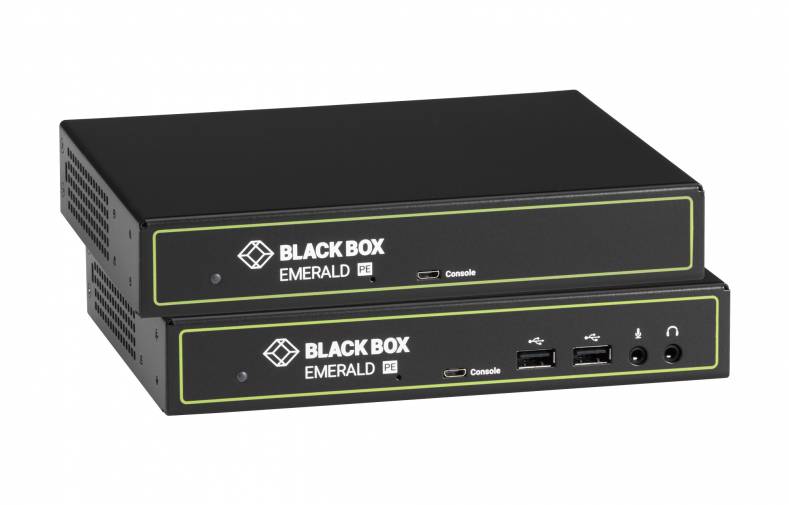 Black Box has extended its Emerald Unified KVM platform with power over Ethernet (PoE) versions of its Emerald PE transmitters and receivers for HD applications, and introduced a ZeroU DisplayPort transmitter for facilities with limited rack space.

“These new Emerald PE and ZeroU systems give users even greater freedom in optimizing their facilities and workflow to best support their operations,” said John Hickey, senior director of KVM and R&D for Black Box. “With its new PoE option, Emerald PE can be deployed even more readily at the user desk or in the equipment room or data center. Now available in both DisplayPort and DVI versions, our space-saving ZeroU transmitter can be implemented readily across various media production infrastructures.”

He added, “Products in the Emerald KVM family from Black Box allow for connections between any workstation to any server or virtual machine on the KVM network. As a result, users can move noisy and heat-generating CPU units to a more centralized and secure location while maintaining exceptional performance from the workstation’s keyboard and mouse.”

Emerald PE transmitters and receivers enable extension and matrix switching of pixel-perfect HD DVI video (up to 1920x1200 at 60Hz), transparent USB 2.0, and bidirectional analog audio — over a dedicated or existing IP network, or even the internet — between any number of users and computers, servers, or virtual machines. The IP-based KVM solution features built-in system redundancy with dual network ports and can be deployed as a point-to-point KVM extender connecting the user to a remote computer or, when scaled up, can serve as a managed KVM matrix switching system.

A little bigger than a smartphone, the compact ZeroU transmitter from Black Box works with the Emerald SE receiver to give users a seamless desktop experience anywhere on a TCP/IP network — with actual hardware housed securely in a corporate data center or in the cloud. Supporting visually lossless full HD video up to 1920 X1200 and typically requiring less than 40Mbps for 1080p video, both the DVI and DisplayPort models of the ZeroU transmitter ensure high-performance connectivity.