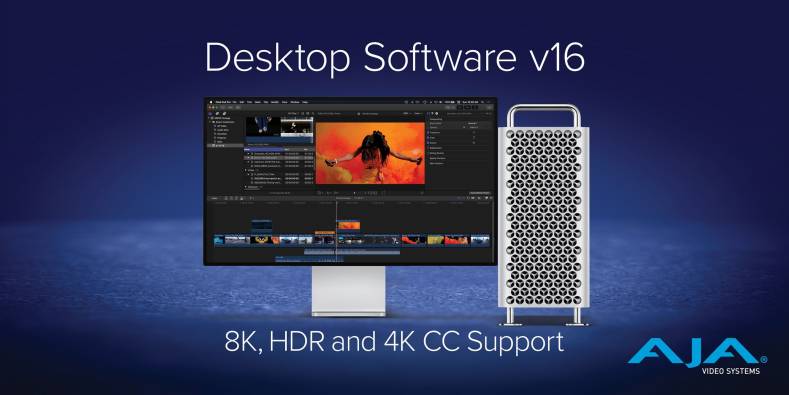 Desktop Software v16 is a free update that introduces new features to AJA’s lineup of KONA, Io, and T-TAP products.

“AJA has the most comprehensive toolset for leading creative software applications, and with our latest Desktop Software v16 update, we’ve continued to add powerful new features that improve the reliability and ease of use of our KONA, Io and T-TAP products. Desktop v16 includes increased hardware compatibility and breakthrough features for creative pros who are working in the latest delivery formats,” said Nick Rashby, President, AJA.

A number of the firm’s partners that have built proprietary systems and solutions for broadcast, post and AV applications using products like AJA T-TAP Pro, KONA 5 and KONA HDMI have already begun to take advantage of the new Desktop Software v16 features.

Drastic Technologies CTO James Brooks said, “Desktop v16, and the SDK version for developers, when integrated with our videoQC and FlowCaster products, allow our customers to transmit full HDR signaling at 4K from anywhere in the world to a local monitor for review. Systems including KONA 5 and KONA HDMI support HDR signaling in, while those with KONA 5 and T-TAP Pro enable HDR signaling out, with auto HDR detection simplifying settings for a more seamless end user experience. KONA 5 and the new T-TAP Pro pair perfectly with our dedicated Intel NUCs, and T-TAP Pro’s incredible output capabilities make it the only mobile device that can handle frame by frame, frame-accurate metadata to nearly any desired monitor.”

With v16, HDR over SDI is available on select AJA KONA and Io products, and the new T-TAP Pro device. The included AJA Control Panel software features a redesigned HDR tab, offering controls for HDR to be signaled via both SDI and HDMI simultaneously. New HDR capabilities for AJA Control Room and AJA Control Panel include the addition of HDR metadata capture and HDR auto playback detection for ease of use for critical monitoring applications. To further streamline 8K workflows, the v16 update also adds KONA 5 8K monitoring and output capabilities for Final Cut Pro and Media Composer.