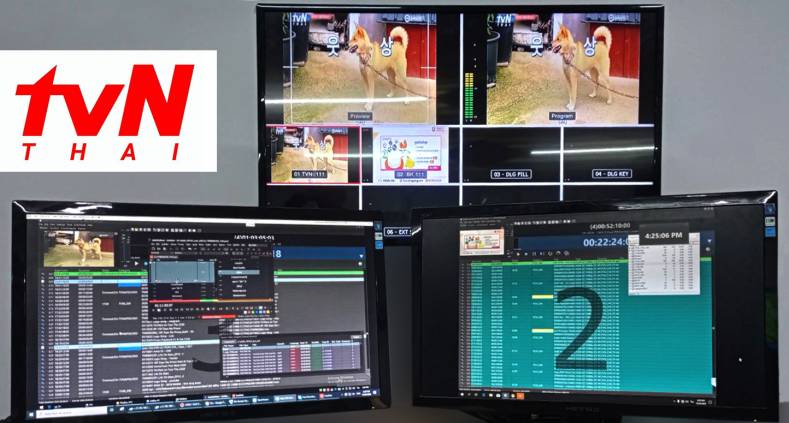 The system will be assigned to tvN Thai which PSI transmits on behalf of Korean partner CJ ENM.

"AirBox Neo-20 server-based systems are the trusted and proven core of the service we provide to our various clients," comments Rattana Taipong PSI Broadcasting Technical Manager. "The new addition, joining the 18 AirBox Neo systems we already have here, allows us to supplement the tvN Thai channel with full backup redundancy including automatic switchover between primary and secondary feeds. This N+1 configuration is an added level of operational security we recommend for all broadcast TV channels provided the customer accepts the relatively low cost overhead."

"Our scheduling and playout staff find the PlayBox Neo control interface very user friendly, allowing them to handle the entire channel management process quickly and easily. AirBox Neo-20 also scores well from a technical viewpoint, being straightforward to install and highly reliable.  The Channel-in-a-Box format simplifies the otherwise complex task of system expansion because each channel functions essentially as a stand-alone module. tvN Thai currently transmits in 1080i HD but the ability to deliver UHD, HD and SD from a single AirBox Neo-20 server is also a major asset."

"We are very pleased to be supporting PSI Broadcasting in this latest expansion of their AirBox Neo infrastructure," adds Nut Deesamer, PlayBox Neo Branch Director, Thailand. "The PSI servers have all been upgraded to latest-generation Neo-20 software which includes a web-based multiviewer with an integral resource monitor, SRT output support for secure and reliable video streaming via public internet, easier than ever connectivity with third-party devices plus the ability to output in a choice of video standards and frame rates."

Centered on a scalable multi-format parallel output playout/streaming engine, AirBox Neo-20 allows media files of various kinds to be combined into a single transmission playlist and supports simultaneous multiple SDI/IP streaming UHD/HD/SD outputs. Files can be trimmed, edited or repositioned at any time prior to being aired without losing the freedom to transmit live. Playlists can be scheduled weeks in advance for automated transmission. Gaps and time overlaps are automatically corrected to ensure continuous operation even when events with conflicting times are present. Special protection is provided to ensure uninterrupted operation where content files or even entire schedules are missing or misplaced.