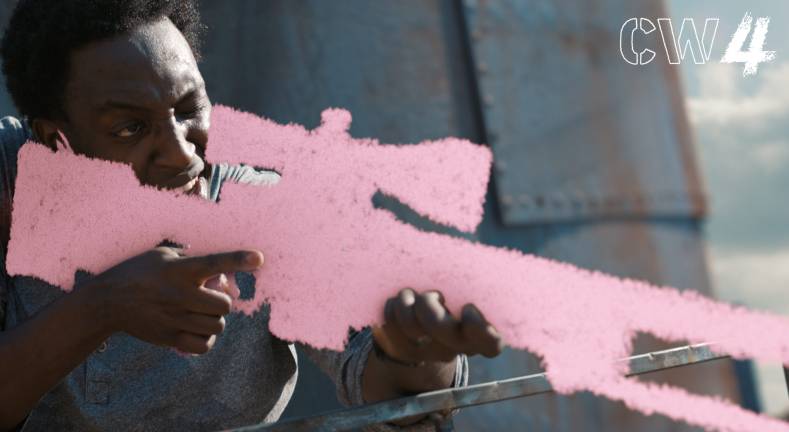 The concept of Chalk Warfare is simple: Teams draw chalk weapons inspired by popular games and media, which become real when pulled off the wall, and the war begins. The first installment was limited to four guys in a park, but by episode 3, twelve players fight over a post apocalyptic warehouse set, drawing items such as space portals, chalk drones, energy weapons and even an Iron Man-esque full body suit.

10 years after the first episode, the Chalk Warfare series has garnered more than 125 million views. Throughout the process, the team found ways to increase the quality, by embracing new technologies as they became available. “One of the things that made Chalk 3.0 look so much better is we switched from DSLRs to the Blackmagic Cinema Camera 2.5K,” said Wickert. “It gave it a much more cinematic, polished look.”

As plans began for Chalk Warfare 4.0, the team felt, as they had for each installment, the need to advance not only the story but also the technology used to tell it. A key element was to continue to embrace Blackmagic Design. “It was always a fantastic experience working with Blackmagic products,” said Wickert. “We get so much quality and performance, and all for a competitive price. We felt we could improve the look of our films, capturing far more dynamic range and providing more options in post.”

Chalk Warfare 4.0 producer Micah Malinics was excited to work with the newest cameras as well. “Blackmagic’s technology has been something I’ve been fascinated with since discovering them in college. I wasn’t able to get hands on experience until the original URSA Mini Pro 4.6K came out, but I was blown away with the picture quality it packed in its size and price. As a producer, I knew this was going to be a game changer for cinematic YouTubers.”

Production incorporated both the URSA Mini Pro 4.6K G2, as well as the Pocket Cinema Camera 4K. For a small production, the flexible form factors allowed them to be more efficient. “We would utilize a two camera setup to shoot double coverage on the flagship action scenes,” said Malinics, “and at times even splitting into two units to maximize the day, since some of our locations we only had a day or two to capture everything. The URSA Mini Pro also allowed us to use some of the cinema grade glass and peripherals that we already had access to, which continued to help us push our cinematic capacity on this project. We also used the Pocket Cinema Camera 4K for a lot of our behind the scenes footage. It’s easy and versatile, and cuts well against URSA Mini Pro footage.”

All materials were composited in DaVinci Resolve Fusion. “Fusion’s node based workflow was incredibly helpful,” said Forde. “On a project like this, with so many shots with similar compositing methods needed, we were able to utilize the node workflow to easily swap in and out assets, as well as tracking data to replace weapons and add them to new shots.”

With the combined tools inside the package, it was simple to drop in new shots, play out the sequence, and make sure they worked within the context of the full edit. “We loved that we could work on Fusion, then click over to the Edit panel and watch it with color and even full sound if we wanted to. We were building a final edit from day one, rather than looking at low res proxies, hoping that everything integrated in the end.”

Wickert and Leigh have focused on Virtual Reality work in between Chalk Warfare installments, so it seemed appropriate to build in some VR work inside Chalk Warfare 4.0. Using a custom built Virtual Camera rig, including the Blackmagic Video Assist 4K, Wickert was able to use footage shot on location with the URSA Mini Pro 4.6K G2 in the VR space. “An example of this is with a robot breaking through the wall. We were able to take photo scanned assets as well as our robot animation and literally film the robot in our office, dynamically reacting to the animation that we are seeing through our Blackmagic monitor on our rig. This allowed for realistic camera moves on our CG, which can often make some questionable CG look convincing.”

With the release of Chalk Warfare 4.0, Wickert, Leigh and Malinics are eager to move on to new projects, though their work on the series continues to inspire their future goals. “We'd like to continue working on projects that excite us and can entertain our audience,” said Wickert. “All these new tools, from VR and 3D to Blackmagic cameras and DaVinci Resolve, can help us create more immersive sequences and even more captivating experiences.”