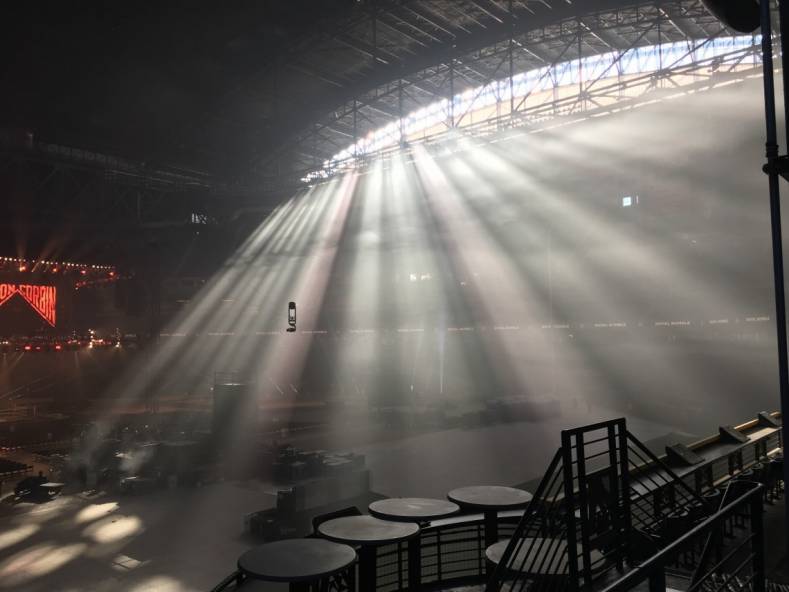 The new spidercam field + system includes a fully stabilized 3D-remote head and support for AR graphics on the field of play.

On January 27th in Phoenix, Arizona, the new and improved spidercam cable hung camera system got its official debut at The WWE Royal Rumble event. Once proven reliable, a second system was used in Atlanta, Georgia, for the NFL Super bowl LIII Opening night festivities.

The spidercam system consists of winches that—via catenary cables—move a camera transport platform, or “dolly”, over a three-dimensional area. Despite few visual changes to the system itself, the field + system has undergone some major upgrades: most notably, the camera systems now include a fully stabilized 3D-remote head, called a Newton by Intuitive Aerial. Newton remote heads are used widely across the broadcast sector and are generally well received due to their small frame and high reliability. By adding this feature, the spidercam field + is able to further reduce camera shaking during movements and enjoys increased overall picture stability.

Besides the corresponding camera control console supplied by Intuitive Aerial, named “Dominion”, the new systems also feature completely reworked digital consoles for the crew member steering the dolly. Besides an integrated touch screen the new consoles implement the “motion playback” feature, allowing moves to be recorded and played back later. This makes it possible to not only rehearse camera moves with the director, but also recreate them with absolute accuracy for the live event.

Another feature that was used during the aforementioned live events was the augmented reality (AR) support. By interconnecting the camera feed with a graphics engine it is possible to augment the actual picture with virtual objects that seem to be part of reality. In order to correctly calculate the virtual objects (and how they change when the camera is moving) the exact position and facing of the camera is needed. The new spidercam field system provides this “hardware tracking”, and directors can add graphics – like player cards – directly to the picture.

The “little brother” of the field +, the spidercam light, was already launched in the U.S. at the MTV Music Video Awards 2018 in New York. The more compact and lightweight system, equipped with the same stabilized remote head as the field +, was specifically designed to operate in smaller venues, like studios or event halls.