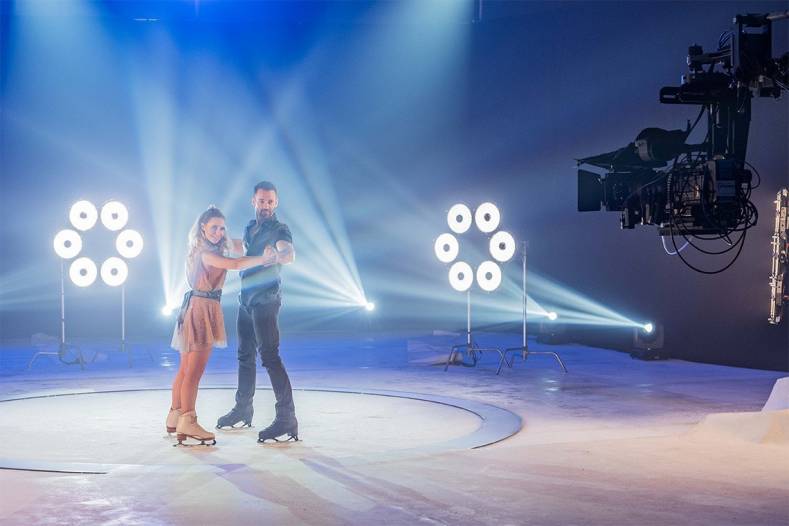 UK network ITV has brought ‘Dancing on Ice’ back to screens after a four-year break. Produced by ITV Studios, the show runs for ten episodes and features celebrities and their partners performing ice dance routines. Fundamental to the look was the Anova LED luminaires. The production company built a temporary set at a former military airfield with two rinks, one for training and one for the live show. The site, Bovingdon Airfield, is a large outdoor space ideal for filming and is easily accessible from London. 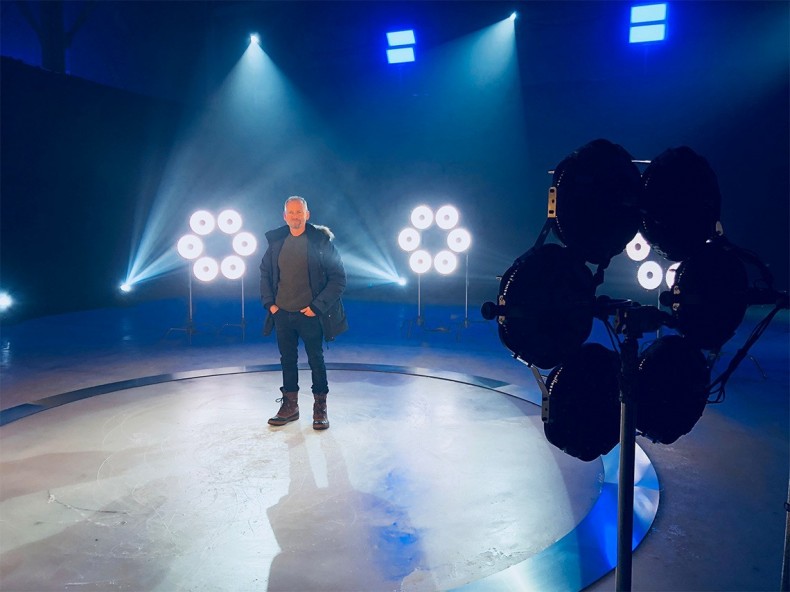 In the build up to bringing ITV’s Dancing on Ice back to our screens after a four-year break, production teams were tasked with making the show bigger and better than ever before. Chris Yacoubian, director of photography for the glamour and profile shots, wanted to create stylish and glamourous profile shots — all while shooting in a studio made of ice. To do this, he chose the Rotolight Anova PRO 2 location and studio LED to help create a dramatic and crisp look for the production due to its visual appeal and extensive functionality.

In total, 30 lights were provided for the shoot — supplied in five custom-designed and built hex rigs in a large ring light configuration. The lighting rigs were then used on the main set to make the shots stand out, while individual lights were used in the interview room for the dancers’ interviews.

“I saw the Anova PRO 2 LEDs clustered together and that just sparked my creativity. I’ve been aware of these lights for quite some time now because of their lovely ring effect. Apart from their stunning aesthetic, they have the ability to do so much more than the ordinary light, which was the final tick in the box for us. We got in touch with the team at Rotolight to see how we could bring this vision to life,” said Yacoubian.

The shoot took place in a custom-built studio airfield, essentially a set made of ice. The LEDs were perfect for this frozen environment as they generate little heat — crucial given the number of lights that were used on set.

The LEDs provided the performance and functionality needed by the production team, as well as a unique aesthetic element. Due to their unique circular design, the lights were incorporated into all of the glamour and profile shots to create a new and exciting look, and to help differentiate the show from its competitors.

The custom-designed hex rings were controlled via a lighting desk and five-pin DMX connection, that also enabled operators to use the built-in CineSFX suite of effects, such as flash and pulse lights, for added drama. This feature ensures that no additional equipment is needed to recreate lighting effects, such as the costly (and often difficult to set up) flickerbox. The suite is user friendly, enabling operators to quickly switch between the effects and the continuous light with a flick of a button.

The LEDs provided excellent energy efficiency for the shoot and no additional heat was generated, a vital requirement considering the frozen environment and the large quantity of lights in use.

“The newly launched Anova PRO 2s have performed amazingly well. In a studio literally made of ice, we constantly pushed them to their limits and they haven’t let us down. They are a seriously versatile tool for your kit,” said Yacoubian.

Rigging the show with the Anova luminaires

The Rotolight Anova PRO 2 has the distinction of being one of the brightest in its class, delivering 10,700 lux output at three feet. It also provides the best power to consumption ratio, at only 72W, while delivering good colour reproduction (CRI>96, TLCI 91). The light includes CineSFX, a built-in customisable suite of special effects — such as TV flicker, sirens, lightning, fire and gunshots.