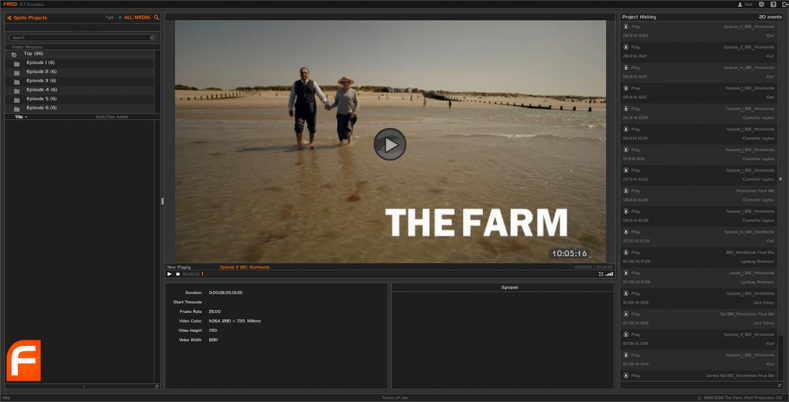 User interface for The Farm's logging, approvals and delivery service

Soho facility The Farm is marketing a storage service for finished programmes that it believes will help production companies with the shift to file-based delivery. The Single Programme on the Shelf service — Spots — is intended to act as a replacement for a production company’s clone tape and the other elements that made up a ‘shelf archive’, and to put an end to the practice of storing finished programmes on removable media.

As an alternative to charging a production company to make a clone of a delivery tape, the Farm will store a one-hour programme for three years for a fee of £500 (~$785).

The Farm says some clients are requesting that not just new programmes, but wider back catalogues be created in Spots to form a viewing library.

The service includes a copy of the AS11 deliverable and a copy of the original edit at the highest possible quality, preferably as a flattened or consolidated NLE sequence. It further includes all associated audio stems in WAV format; a PDF containing auto QC, Harding tests (for photosensitive epilepsy) and other information including graphics packages; music cue sheet; and a H.264 viewing proxy. As part of the service, a physical asset is offered either on LTO or on Sony Optical Disc Archive, which The Farm is currently evaluating.

At the end of the three-year period, companies will be asked if they want to keep the programme in storage or remove it. If they decide to retain a copy then this will likely reside in the cloud.

“Historically, producers would be able to physically take away a number of assets associated with their production – usually a tape safety copy, another with random audio and a bag of paperwork which would probably sit under their desk for a while,” explains The Farm joint managing director David Klafkowski. “But in a file delivery world there is no going home present as such. If you can make the price of storing the asset as attractive as it would have cost to make all those deliverables before then producers won't see this as an additional cost sitting at the end of the delivery process, but a routine, defacto part of the programme budget.”

“This is not about replacing the MAM systems at the bigger production companies,” Klafkowski insists. “Often they do not have the time to collate all of the nuts and bolts per finished episode. That is a service which post houses have traditionally done.”

Spots resides within Fred, The Farm's managed delivery, remote approvals and logging service and will be identified by a 'stub' on a producer's internal MAM.

“They will know that there is some richer content available for a particular show held in a different library,” says Klafkowski. “If they need to reversion or revoice it, they know there are richer assets available.”

The three-year time period is designed to help producers think about the value of archiving their assets for a longer period.

“If a production company does need to revisit a show after completion this is most likely within the first few months to a year,” he says. “Beyond three years and most content goes untouched. There is a lot of content that could be deleted.”

File storage is also primed for quicker and more cost-effective access, it is argued.

“If anyone wants to restore content from a LTO spinning disc then there is a cost to the producer, whereas the advantage of paying up front for Spots for a three year period is that there is no retrieval cost,” he says.

“Spots fills the gap for many smaller production companies who aren't going to buy a MAM or who don't have the internal IT support to set up a LTO or spinning disc storage system.

“Plus, the nature of production companies these days is that staffing is very transient. There are likely to be different people working from series to series with no one with historical knowledge of the programme to go back and find elements within it if needed. So Spots is a way of maintaining a central hub of continuity.”

Klafkowski believes the Digital Production Partnership delivery specification AS-11, which came into force for ITV and C4 in October, should be treated as a transmission deliverable, not an editable archive.

“This is the answer to production companies’ questions about what to do when they move to 100% file-based delivery. Putting a programme on spinning disk is not a solution, and providing producers with HD Cam SR tapes is not a solution with any longevity.

“I would love it if it became the automatic thing that every producer did at every facility at the end of the programme.”